Evan K Margetson is an American writer, born and raised in Harlem, New York City. He grew up back when kids played outside until the lights came on and Motown ruled the music charts . He holds a B.A. in Latin American Studies and studied Brazilian Literature and Creative Writing at Columbia University. Mr. Margetson has previously published short fiction in TriQuarterly Review, and Night Falling On The Tree of Cups is his first published novel. Mr. Margetson is fluent in Spanish and Portuguese and his fascination with Brazil began at an early age, a fate he attributes to early exposure to samba and bossa nova. He has lived in Salvador, Bahia and travels often to Rio de Janeiro. Mr. Margetson currently lives in the Boston area with his wife, a Brazilian musician, and their family, although he has not relinquished his New York citizenship and lifelong devotion to the Mets. He is at work on another novel.

“Margetson effectively imagines the sweat and samba of Rio de Janeiro from a half a century ago...The book lingers and leaps with a Latin American rhythm and a tolerance for horror that feels significantly more immersive than the majority of American fiction set in the Third World...The author captures not just the facts of a moment in history but also the humanity at its center. A wondrous novel of trauma, individuality and poetry.”
– Kirkus Reviews 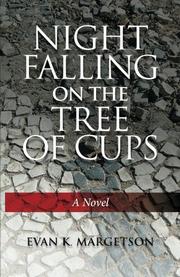 Night Falling On The Tree Of Cups

Margetson, in his debut novel, explores the fates of two interwoven families against the backdrop of Brazil’s 1964 coup d’état.

Two families, one rich and one poor, anchor this fictional look at the ways that society fractures along lines of class, race, fortune, and ambition in Río de Janeiro. There, life is as colorful as it is fleeting, and the heat is as oppressive as the police force. Nothing highlights the disparity quite like the column of army tanks that appears in the streets one morning in 1964, during the season of carnival. The lowly bartender Afonso, who serves as the reader’s guide, is a quixotic figure in the most literal sense, driven by some childhood malady (or defense mechanism) to see the world in his own poetic terms. He diminishes the threat of the tanks, for example, by determining them to be a pack of elephants. His young nephew has inherited the practice; the boy calls himself “the Wolfman” and wears a carnival mask that he believes renders him invisible. Such poetic actions transmogrify the violent life of the favelas (urban slums) into something manageable, even beautiful. Meanwhile, the Wolfman's grandmother Zoilma works for a wealthy family that includes teenage photographer Agnes, her blind mother, and her absent, politically active father. Most of the characters are emotionally scarred, and the sins of the previous generation may determine the fate of the current one. Margetson effectively imagines the sweat and samba of Río de Janeiro from half a century ago and, perhaps more impressively, sheds American notions of novelistic structure, pacing, and expectation. The book lingers and leaps with a Latin American rhythm and a heightened tolerance for horror that feels significantly more immersive than the majority of American fiction set in the Third World. The author’s prose keeps readers’ attention locked in the minutiae of his characters, even as events of greater objective importance unfold at the story’s margins: “She kept time, struck the match. Still keeping time with her foot she blew out the match and quickly put it in her mouth, removed it, then exhaled a single smoke ring.” The book is full of these rhythmic moments, which are somehow more vibrant and enduring than the background political events. The author captures not just the facts of a moment in history, but also the humanity at its center.

A wondrous novel of trauma, individuality, and poetry.

One Hundred Years of Solitude, by Gabriel Garcia Marquez

...the Southern Cross is too high in the heavens to distinguish our laughter or our tears..." from Philosopher or Dog by Machado de Assis

the revelation of character and the presence of the unconscious and the mysterious in all that appears obvious; the connections between what is most personal and what is most universal