Fabio Scalini was born and raised in Ravenna, Italy, where he has been working on the Mordraud project for over a decade. He is a classically trained musician and earned his university degree in Design and Communications. Scalini’s career path before, during, and after his studies has been multifaceted; he toured throughout Italy and Europe as a professional bassoonist, served as a factory shift worker and was employed as longshoreman fueling fishing vessels. He wrote the screenplay for the short movie based on his first novel, as well as he composed and played the soundtrack. Sometimes, he writes music for creating the perfect soundscape for the situations he wants to describe. 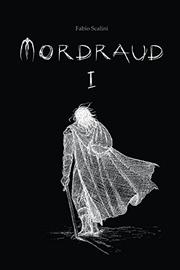 From author Scalini (Mordraud Book 2, 2015) comes a fantasy novel—the first of four in a translation from Italian—about three brothers in a time of war.

When readers first meet Varno, he’s in the uncomfortable position of being pinned to a tree thanks to an enemy’s lance. Though the blow didn’t kill him, Varno’s end certainly seems near. As a Khartian, Varno admits that his people “love fighting wars,” though his experience has hardly been positive: “He was about to die for nothing, he realised.” After escaping the battlefield, Varno is miraculously nursed back to health by Eglade, an Aelian who has always been taught to despise Khartians. Eglade is, by Varno’s assessment, “gorgeous, yet strange,” and the two develop a relationship beyond convalescence. They learn to love each other as they discuss the differences between their cultures and the state of the ongoing conflict, until a sudden violent encounter forces them to flee together. After years of wandering and struggle, the two are eventually able to start a family, with three boys—Dunwich, Mordraud, and Gwern—born from this unlikely union. What will the world make of these half-Aelian, half-Khartian siblings and their three distinct personalities? Dunwich is eventually sent away to learn Arcane chanting, while Mordraud takes a liking to swordplay, and Gwern proves his capacity for learning. The stage is thus set for an adventure that meanders through the realm of Cambria. Though the story contains its share of combat—as when Dunwich observes a battlefield: “Bits of metal, crumpled shields and broken blades were scattered about”—it is first and foremost about the development of these three young men. The complex worldbuilding is often lengthy on explanations—there is much to be said about the chanting Dunwich studies, for instance—yet the agile storytelling nevertheless avoids many banalities of the genre. Some readers may be less enthralled by the voluminous Cambrian history, e.g., “to secure control, the Empire had had to depose the historic family ruling those lands for generations: the Rinns, who were the oldest and most extensive lineage in the whole of the east.” But readers happy to engage with such passages will find a nuanced exploration of a troubled time.

Cambria is burning. Its flames consume the dying dreams of Imperial glory, along with the rebels’ yearning for revenge, helmed by Eldain. The war has come to an end and, with it, a duel between brothers. Gwern, the youngest of the three, sets off to seek Mordraud. This journey will take him to the city of Syl, where hired assassins and conscienceless merchants cut deals in the shadows of its myriad of bridges. The same murkiness where Dunwich has stowed away, after desolate flight from what took place at the foot of the golden gates. The brothers’ paths will cross again, once Gwern comes to learn the secret that has always conditioned his family: what is man’s Limit? What mystery is concealed beyond the infinite ocean surrounding the world?
Published: July 20, 2015
ISBN: 978-88-99069-09-4