Felicia Kate Solomon is a graduate of the MA Writing Programme at Sheffield Hallam University. Felicia also holds a Postgraduate Certificate in Creative Writing from Newcastle University. Felicia has taught the creative arts to children in primary schools both in the UK and USA and alongside writing prose, she also writes and performs her own work for solo performance. Felicia lives near Hebden Bridge in West Yorkshire, England.

Lucia”s Poltergeist is Felicia’s debut novel. Although firmly a work of fiction, Felicia drew from her own past to pen this provocative psychological scenario where a teenager, devoid of love and affection creates a poltergeist to communicate with her family, but then cannot stop her own actions-almost as if the poltergeist truly exists.

Felicia Kate Solomon wrote this book to make better sense of her life. Having experienced a challenging childhood, she wanted to turn her life material into fiction to both gain a better understanding of herself and to reach other teenagers who have had similar experiences.

The themes of duality and polarity were ones Felicia was especially keen to explore, as growing up in difficult circumstances can exacerbate this ‘splitting,’, creating a different self to cope or survive. Felicia is fascinated by the role of the double, the Jekyl and Hyde within us all, and she wanted to shed light on this issue through the protagonist, Lucia’s, story. ‘It is vital,’ Felicia states, ‘that we come to know both the light and the shade within ourselves, to become as integrated and human as possible.’

‘This is a brilliant book, one of the best written books I have ever read.’
Review of Lucia’s Poltergeist by Love-reading.co.uk

Felicia is working on her second novel, a love story, which explores the themes of intimate relationships and finding fulfilment in mid life. She also wants to merge her two passions of travel and literature into a blog of travel writing and Felicia plans to write a third book, exploring the vital relationship between creativity and mental illness and finding holistic ways to deal with psychological trauma. 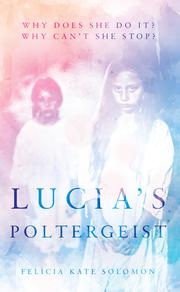 In this debut novel, a teenage girl displays disturbing behavior while her frayed home life worsens.

The year is 1989, and 16-year-old Lucia Goldman lives with her mother, Valerie, in a shabby London apartment. Lucia has two older half-siblings from Valerie’s first marriage, Ben and Tim. The girl’s father, Colin, has grown emotionally distant since remarrying and retiring to Spain. Worst of all, Valerie drinks and frequently vents her frustration with life on her daughter, which leads to shouting matches and even physical violence. Lucia loathes her mother and uses pain, like radiator burns, to dull the present moment (“Pain pauses time”). Stress also causes a strange pulse to throb between her legs. One evening, Lucia is concentrating on homework when she discovers some water staining her paper. She can’t discern how it got there, but the notion of a leak in the apartment gives her mother hysterical flashbacks to a flood in 1979. The novelty of the situation energizes Lucia, and so she starts spilling water here and there in secret. When Ben becomes involved, he calls out Lucia for the mischief. But the situation becomes serious when a malicious force introduces itself as Ginger and warns Lucia: “Kill or I will.” Does this poltergeist have something to do with Colin’s disconnect from his daughter? In this charged, though delicately wrought period piece, Solomon flashes between 1989 and Lucia’s earlier years visiting her father. Sedate and eerie prose employs the senses fabulously, as in the line “She studies the patch of water. It looks like a goat’s head with horns from where she stands.” Certain details of Lucia’s childhood, including sharing a bed with her father, are odd at first. Later, Colin’s mental health deteriorates and creeping realizations hit Lucia and readers simultaneously. Throughout, seeing her suffer a traumatic adolescence is heartbreaking, and it is to the author’s credit that this narrative proceeds much like a memoir. A psychic investigator speaks to readers in their darkest moments when he tells Lucia: “Flow with life, my child, not against it.”

A quiet thriller that succeeds in mirroring life’s complex and jarring pathways.

Bastard Out Of Carolina.

As we find the words, we find ourselves.

I think there’s an unlived Broadway actress in me - I’d still like to tread the boards at some point.