Fernando Bravo books, OLIVER MARIS and CHILDREN OF GALLOR, were inspired by his kids. However, Bravo's love of storytelling will not stop at children's stories, as he continually works on imaginative tales for readers of all ages.

When he's not reading or writing, Bravo enjoys attempting to take decent astrophotography images with his telescope, and after failing, complaining that the hobby is too difficult. 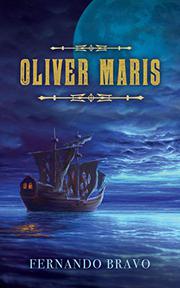 This middle-grade novel stars a shy boy who escapes into a fantasy to cope with bullies and his mother’s illness.

To pass the sixth grade, Oliver Maris must earn extra credit. His teacher, Ms. Nordfane, allows him to perform in the upcoming school production of Adam and the Whale as one of the jellyfish. This nonspeaking role is perfect for the reticent boy, who’s ridiculed frequently by three bullies: Buck, Turin, and Eugene. Oliver is so timid that he doesn’t stand up for himself despite being a fourth-year judo student. At home, Oliver enjoys rousing escapades as a pirate captain alongside his brothers, 8-year-old “Lil Nicky” and 3-year-old “Kid Gross.” Oliver’s best friend and classmate, Sabrina Flores, often joins the boys aboard the imaginary ship Wind Fury, battling other vessels and even aliens. When “Captain Maris’s” mother is taken, he doesn’t hesitate to board an extraterrestrial craft to rescue her. There, the Captain and his cohorts meet Grumpus, a man who looks like Santa Claus and who gives them a map. “To get to your mother,” the man says, “you have to cross into the Parallel Dimension.” The Captain does so as the Wind Fury approaches a mirror image of itself, crew included. He takes on the identity of the boy across from him, Oliver, keeping his true nature as a pirate a secret. The Captain then starts upgrading Oliver’s life by trouncing the bullies and auditioning for the play’s lead role. But the knowledge of his mom’s cancer and some slips back into the role of Captain make the adventurer’s path a rocky one.

Bravo’s inventive tale possesses a tricky structure that should draw in his target audience. After the informative first chapter, readers plunge into a lengthy fantasy section that seemingly abandons Oliver, the student, and his various problems. The Captain’s confidence is noticeable and stirring to behold. He tells Lil Nicky: “Each moment is an opportunity to make things better.” Grumpus later advises the Captain: “To become the boy, you must forget who you are,” a line that sounds playful enough but contains hefty emotional weight for adult readers who realize that childhood, usually full of light and innocence, is so difficult to recapture even in the imagination. A further narrative shift occurs as multiple chapters of Adam and the Whale appear in the text. The author’s creative approach shows younger readers the directions in which fiction can stretch, preparing them for classics like Bram Stoker’s epistolary Dracula. Most importantly, Oliver’s bullying does not happen in a vacuum. Readers see that Buck lives in an emotionally abusive home and believes—sweetly and naïvely—that starring in the play is a steppingstone to a professional acting career and a better life. He and the Captain eventually come to understand each other—after some questionable brawling, of course. The plot of Adam and the Whale offers an extended metaphor about looking deeper at cause and effect while allowing Bravo to deliver some sublime moments. In one scene, Madame Maura, a soothsayer, wears “an evil grin” that “oozed out onto her aged and leathery face.” A solution to the mystery of Grumpus rounds out the heartwarming tale.

We all have to face difficult challenges as we grow up, but in this thrilling sci-fi adventure, fourteen-year-old Maggie Daginoor and her two younger brothers are forced to face challenges far more difficult than most can even imagine. After witnessing their parents’ violent abduction from their Florida home, Maggie and her brothers embark upon a perilous journey to bring their family back together again. The journey carries them twenty light-years to a planet orbiting a red dwarf star and thrusts them right into the middle of an alien war. Children of Gallor follows the Daginoor children as they struggle with hunger, sleep deprivation, and fear for their lives while waging battle against sinister alien forces to find their parents, and ultimately, find themselves. Worn down and surrounded by unimaginable conflict, the young protagonists must come to terms with their own strengths and weaknesses and defy their sheltered youth as they tackle the dangers of a daunting foreign world. Full of action, adventure, and drama, Children of Gallor is a unique coming-of-age story with a delicious sci-fi twist that’s sure to appeal to imaginative, creative thinkers, as well as to anyone interested in stories about personal growth and overcoming adversity.
Published: April 8, 2014
ISBN: 978-1493700806