As an Author, speaker and educator, it is my aim to enlighten and uplift with stories of transformation and hope. My work seeks reconciliation: racial, spiritual and personal. I have published two novels, Rendered Invisible: Stories of Blacks & Whites, Love & Death (2010, Plain View Press); and The Race Is Not Given (1999, SterlingHouse). Rendered Invisible, is a work of historical fiction which examines the little-known .22-Caliber Killings of 1980, from the perspective of two families, black and white, as a city, Buffalo, NY, seeks to come together in the face of racial killing and chaos.

Additionally, I have written several plays which have been presented nationally. My one-act play, “Fridays Without Pay” was presented at the 2005 National Black Theatre Festival. It examines black male-female relationships from a historical context. And my full-length play, “Young Messiahs Fly,” has been presented in North Carolina, Ohio, and several other locales, including New York City, at the famed Frank Silvera’s Writers Workshop in Harlem, NY. This work looks at the shooting of a rising young basketball star through the lens of police brutality and violence.

As a scholar, I have written on such diverse subjects as Clint Eastwood, Paul Laurence Dunbar, and others. My published scholarly examinations of race, gender and class include autobiographical pieces on my own working class background, and essays about personal loss, such as losing a someone friend to gun violence, and my parents’ struggles with Alzheimer’s and Cancer. I have had numerous scholarly works in print and presented nationally. I am presently working on several new projects, including a screen play, and scholarly explorations of black male leadership as portrayed in film. 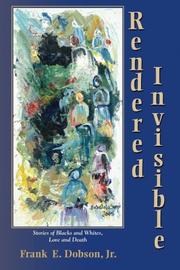 A poignant short story collection that examines African-American males in the modern era.

Dobson (The Race Is Not Given, 1999) presents six stories that attempt to give voice to seldom-heard experiences of black men. In the titular and longest story, an academic named Eddie returns to his old stomping grounds in Buffalo, New York, to hear his friend Johnny Smith’s account of his experiences during the reign of terror of the 22-Caliber Killer, Joseph Christopher. The real-life Christopher killed at least 13 people, most of them black men, in 1980 and 1981. Johnny’s tale is interspersed with facts about the slayings themselves, the slow progress made by the police, and the mounting frustrations of the black community. The relationship between Johnny and Bill Reilly, Johnny’s wife’s former professor and a white man, become a microcosm of the violence and racial tension that’s consuming Buffalo. Near the end of the story, Dobson points out how a prolific serial killer who wanted to “start a race war between blacks and whites” received little attention outside of New York state. In “Black Messiahs Die,” a young black athlete, Jonathan Jameer Gadsden, is killed by a cop who claims he thought that Gadsden was reaching for a weapon instead of a basketball. While Gadsden’s agents wonder how the cop could have failed to recognize a famous athlete “worth 100 million,” their 24-year-old secretary Eden mentally connects the slaying to other incidents of police killing young black men. The collection occasionally suffers from stilted language, as when Eden, overtaken by grief at Jonathan’s death, tells her son, “Mommy’s sorry to have awakened you.” Overall, however, the stories are compelling and particularly poignant in light of the increased awareness of racist murderers and police violence. The story of Jonathan Gadsden’s death, for example, seems to fit in seamlessly with the real-life cases of Tamir Rice, Walter Scott, and John Crawford. In one of the strongest moments in “Rendered Invisible,” the characters discuss why Johnny’s story needs to be told, and eloquently decide that it’s to overcome the media images of “crazy” black men like “O.J. and Malvo” because “most of us are not crazed maniacs or monsters. We’re just invisible.” By telling these stories, Dobson attempts to fulfill the same mission set out by his characters.

Tales about feelings of erasure and invisibility that will resonate with many readers.

The Fire Next Time

"Color is not a human or a personal reality; it is a political reality." (James Baldwin, The Fire Next Time.)

The Race is Not Given