Frank Nappi has taught high school English and Creative Writing for over twenty years. His debut novel, Echoes from the Infantry, received national attention, including MWSA's silver medal for outstanding fiction. His follow-up novel, The Legend of Mickey Tussler, garnered rave reviews as well, including a movie adaptation of the touching story "A Mile in His Shoes" starring Dean Cain and Luke Schroder. Frank continues to produce quality work, including Sophomore Campaign, the intriguing sequel to the much heralded original story and the just thriller, NOBODY HAS TO KNOW, which received an endorsement from #1 New York Times bestselling author Nelson DeMille. Frank is presently at work on a third installment of his Mickey Tussler series and his next thriller. He lives on Long Island with his wife Julia and their two sons, Nicholas and Anthony.

“The story's pacing is brisk, the narrative generally fluid and the conclusion an absolute jaw-dropper...”
– Kirkus Reviews 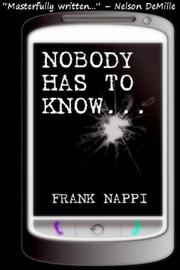 NOBODY HAS TO KNOW

Cameron Baldridge—a young, handsome high school English teacher—seemingly has it all: a job that he loves, students who adore him and a beautiful, successful soon-to-be fiancée. But underneath the perfect facade is a deeply scarred man still trying to come to grips with the tragic death of his first love so many years earlier. He pines for an attractive student named Nikki (described fittingly as “Nabokov’s nymphet”), succumbs to her wild sexuality and ultimately tastes the “forbidden fruit”—with disastrous consequences. Shortly after secretly meeting Nikki in a hotel room, she collapses and dies. Baldridge panics, flees the scene, and believing that he got away unseen, continues on with his life. But when he receives a text from Nikki’s phone, he realizes that someone else knows exactly what he did. The story’s pacing is brisk, the narrative generally fluid and the conclusion an absolute jaw-dropper, but three faults make this potentially excellent thriller a more pedestrian read. The story wields several contrived plot twists; for example, a computer virus happens to wipe out Nikki’s cell phone records. The frequent, clunky changes of perspective, although understandable, continually distract. And the unlikable main characters, Cameron and Hayley, sabotage the narrative. Following their dysfunctional relationship, based on and nurtured by lies, drains emotional connection to the characters and power from the reading experience.

Fans of adrenaline-inducing storylines and bombshell plot twists should read this flawed thriller for the conclusion alone. 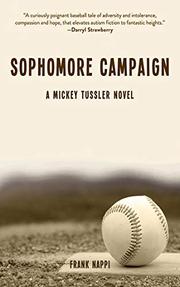 Ridiculously mannered prose strikes out this ambitious tale of a 1949 minor-league baseball team with an autistic star hurler and a courageous black catcher.

“This was home. The ballpark. The one place in the world that mattered. The one place in the world that did not morph in the tumult of the universe.” Evidently styling himself the next Damon Runyon, Nappi follows up The Legend of Mickey Tussler (2008; made into the 2011 TV film A Mile in His Shoes) with more diamond action between the Brewers and archrival Rangers. This is highlighted by the return of Mickey, the “Baby Bazooka,” and the arrival of slugging catcher Lester Sledge from the Negro Leagues. Mining the thesaurus for alternatives to the N-word, the author subjects Sledge to a hail of “ulcerous screams” and “festering odium” from “yard ape” to “jigaboo.” Not even repeated attacks from local members of the KKK prevent him from emerging “like a powerful pupa” to shine on the field. Meanwhile, as Mickey mows opposing batters down, his mother and Brewers manager Arthur “Murph” Murphy consummate their relationship (“…her entire lifetime had been communicated to him through her soft, wet lips”). As in the opener, Rangers’ chicanery again leads to a climactic Brewers defeat, but a call to the Show for Murph, Mickey and Lester tacks on an upbeat ending.

Few young readers will get that far, or care much. 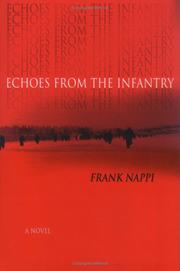 ECHOES FROM THE INFANTRY

A moving first novel about a courageous soldier who fought in WWII and grew to hate it.

Twentysomething James McCleary, foot soldier in the 95th Infantry Division, was “a typical dogface,” as his best friend puts it. Having fought through most of the war, including the horrific Battle of the Bulge, he finishes in the hands of the enemy, a POW. The war over, he returns to Far Rockaway, N.Y., and to his sweetheart, Maddie Brandt. He marries Maddie and fathers three sons, to whom he remains an enigma all his life. It was the war—physically intact, he’s a casualty nonetheless. What he saw and what he did never leaves him, making it impossible to perform the roles society has assigned him. “I don’t think I can remember one time when I saw him laugh,” one of the boys says to Maddie, a complaint shared by all three siblings. But it’s John, the oldest and most sensitive, who suffers most from a father missing in action. And it’s John who, at last, gains an insight into the nature and extent of the war wounds. After Maddie’s death, the McClearys put the house up for sale. Emptying the attic, John finds a packet of letters from James, a young soldier, to Maddie, the girl he loves and left behind. In alternating scenes, The author shows James’s view of the war and John’s reaction to it. The son gets to see his father in a light that astonishes him—not the shadowy, withdrawn figure that embittered his growing up, but someone vividly alive, someone as afraid as he was brave, someone remarkable.

Not flawless, but certainly heartfelt, and searing in its condemnation. On his last page, Nappi quotes Christopher Marlowe: “Accurst be he who first invented war.”

NOBODY HAS TO KNOW BOOK TRAILER

So we beat on, boats against the current, borne back ceaselessly into the past.

NOBODY HAS TO KNOW: Orangeberry Book Tours Hall of Fame - Best Mystery/Suspense, 2013

The Legend of Mickey Tussler

In the late 1940s, the minor league Milwaukee Brewers are foundering yet again and manager Arthur Murphy is desperate. When he sees seventeen-year old Mickey Tussler throwing apples into a barrel, he knows he has found the next pitching phenom. But not everyone is so hopeful. Mickey’s autism—a disorder still not truly understood even today—has alienated the boy from the world, and he is berated by other players and fans. Mickey faces immense trials in the harsh and competitive world of baseball while coping with the challenges inherent to his disorder. An honest and knowledgeable book about overcoming adversity, and the basis for the television movie A Mile in His Shoes, Mickey’s powerful story shows that with support and determination anyone can be triumphant, even when the odds are stacked against him.
Published: April 1, 2012
ISBN: 9781616086589