Franklin Hook is a retired physician and radiologist. A U.S. Navy and
Army veteran, he commanded the 311th Evacuation Hospital during
the first Persian Gulf War.
His military career includes three years of active duty with the
navy, including one year of sea duty, and service as an Army Reserve
officer. Currently, he lives in Hot Springs, South Dakota. He is a member
of the American Legion, as well as a lifetime member of the VFW.
Dr. Hook is a graduate of Stanford University and the Sidney Kimmel
Medical College of Jefferson University in Philadelphia. He is also
an associate professor of radiology (retired) at the University of North
Dakota School of Medicine.
He is the award-winning author of Never Subdued, a true narrative
history of the Philippine-American War, Desert Storm Diary, Never
Subdued II , a unique perspective on the rise of radical Islam
and Pinky, the story of an aerial combat ace on Guadalcanal. He has written
a number of medical articles for various journals, and one medical
textbook on CD-ROM.

“In chapter after exciting chapter ( ) Hook presents a well-researched and well-documented narrative history of the diplomatic and naval collisions between the various Muslim beys and emirs and the various U.S. sailing masters, the captains and commodores who sailed the original small fleet of American frigates to the other end of the world (also expanding his story to include a very spirited account of the War of 1812). This is vital, readable history written smoothly and professionally, ( ) and Hook unites most of his matter with a warning about the present now that the West, once again faces conflict with the Islamic states.”
– Kirkus Reviews 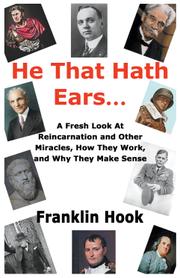 HE THAT HATH EARS…

A writer explores the connections between Christianity and various concepts of reincarnation.

Hook (Yankee Gone Home, 2017, etc.) believes that the Judeo-Christian Scriptures fully support a more or less standard view of reincarnation—that human souls migrate from body to body and time period to time period, with or without clear recollections of their previous lives. Traditional theological stances have tended to hold the opposite line, taking the key cue from biblical verses like this one found in Hebrews: “It is appointed unto men once to die, but after this the Judgment.” In counterargument, Hook goes straight to the heart of the matter, citing the Gospel of John, in which Jesus famously says: “Verily, verily, I say unto thee, except a man be born again, he cannot see the kingdom of God.” When, later in John, Jesus asks his disciples who the people say he is, they report one rumor that claims he’s Elijah reincarnated. The author is a true believer in reincarnation, asserting that “all pain and human sufferings are not due to mere chance, but rather to the consequences of misbehavior in past and sometimes current lives.” Hook seeks to convince readers that the doctrine of reincarnation represents a “path to union with the divine” that runs straight to Jesus (“The best news ever given to mankind”). The author believes that science will eventually be able to prove all of this empirically. This enthusiasm occasionally leads him to overreach, as when he declares that the scientific evidence for reincarnation has grown to the point of being “almost overwhelming” when in fact no impressive mounds of solid proof exist. But readers familiar with reincarnation literature will expect such overstatements, and the tone here is charmingly avuncular: The author includes friendly anecdotes as well as clear discussions of human physiology. Hook’s reading is extremely wide-ranging and energetic; Christian researchers and New Age fans alike should be captivated.

A thorough and largely convincing argument for the validity of reincarnation in the Christian worldview. 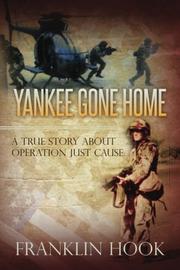 A book examines a 20th-century American military campaign and one man who endured it.

In this volume, Hook (Never Subdued II, 2015, etc.) unfolds dual narratives operating on very different scales. The larger, broader one explores modern military history: specifically the course of Operation Just Cause, President George H.W. Bush’s 1989 invasion of Panama to depose Gen. Manuel Noriega. The author grounds this expansive tale in a vast amount of painstaking research into primary documents and contemporaneous reporting, all of it shaped and marshaled with a great deal of dramatic efficiency and storytelling brio. Although the book’s primary focus is clearly on the personal level, its look at Operation Just Cause is absolutely first-rate military history, filled with memorable portraits like that of commanding Gen. Maxwell Thurman, “a bachelor who was said to be married to his profession.” His “reputation often preceded him to new duty stations, similarly to what happened to Gen. George Patton during World War II,” Hook writes in a typical passage. “Much like Patton’s reputation, Thurman’s similar reputation undoubtedly helped him to produce results.” Alongside this vast tapestry is the work’s heart, the story of one soldier: Spc. E-4 Bruce Beard, who received his marine certificate as an engineman on Sept. 23, 1987, and enlisted in the Army just five weeks before the U.S. Senate passed its resolution calling on Noriega to step down. Beard arrived in Panama on Sept. 11, 1989, in what Hook diplomatically describes as “a chaotic situation.” In that widespread disorder, Beard fell into drug use, drew a bad conduct discharge, and found himself cast adrift in civilian life with PTSD and no governmental services to help him. In this entirely gripping account, Hook goes into Beard’s case in great detail, tracing the bureaucratic ignorance among Operation Just Cause officers as to how serious drug use could be (Hook points out that only Vietnam veterans knew the problem firsthand). The blending of the two threads produces an arresting picture of a military episode most Americans have forgotten.

A sweeping and heartbreaking story of modern war and its personal costs. 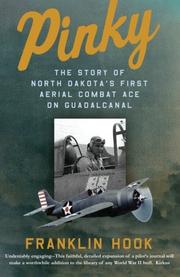 To form this story, Hook collects the wartime diary of Francis “Pinky” Register, a World War II Navy pilot from North Dakota, and contemporaneous articles, letters and reports; Hook also conducted his own extensive research and got considerable help from Register’s surviving brother, Bill. The end result is the story of Register’s life, from his aerial beginnings in Civil Aeronautics Association courses taught by Hook’s father to Register leaving his wife for life at sea just a few months after their wedding and his eventual death in aerial combat on the Aleutian island of Attu. Hook isn’t shy about becoming part of the story, discussing his research process and occasionally inserting brief personal anecdotes, such as his father’s 1939 prediction that scrap metal sent to Japan would soon come back at the United States. Hook’s presence as tour guide gives him a chance to explain the greater context that Register’s diaries don’t always address, orienting readers to the significance of the battles Register fought over Guadalcanal and Attu. Register’s many close calls, including bluffing his way past enemy fighters when his guns ran empty, bring home the fact that skill and bravado weren’t enough to make an ace fighter pilot. Luck was essential, too, and Register had plenty of it. This work is undeniably engaging up until the moment Hook inserts his own political and cultural views: e.g., “I don’t see [pride] in our liberal colleges and universities where teachers who have never been exposed to the real evils that are out there in the world pass on their ignorant philosophies to our youth.” That line of thought may be off-putting to those who don’t share the author’s views, but after a few pages, he returns to his coverage of Register’s story. The material is researched and verified, although some historians may cringe at the repeated use of Wikipedia as an authoritative source.

This faithful, detailed expansion of a pilot’s journal will make a worthwhile addition to the library of any World War II buff. 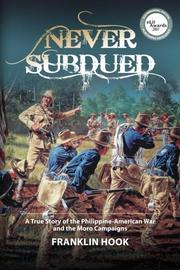 A history of a century-old war with frightening relevance to today’s counterinsurgency campaigns.

Islamic extremists, guerilla warfare, mountain firefights—Americans are painfully familiar with these things from the recent conflict in Afghanistan. But as Hook notes, the U.S. military faced similar challenges in the Philippines following the Spanish-American War. A retired doctor and reserve Army colonel, Hook spent a decade researching the Philippine-American War and the Moro Campaigns. After Spain ceded the islands to the U.S., American soldiers found themselves battling native Filipinos who previously were glad to see them. Emilio Aguinaldo and his revolutionaries wanted independence from foreign rule, but U.S. policymakers had other ideas. Drawing on soldier diaries, newspaper accounts and other sources, Hook presents a boots-on-the-ground narrative of the bloody insurgency that followed. American soldiers fought the elusive Filipinos while suffering under intense heat, relentless mosquitoes and rampant disease. Careful to note discrepancies and biases in his sources, Hook constructs a timeline that captures the tension as events teeter out of control. He also tries to explain the thinking on both sides, showing how policy blunders, duplicity and prejudice may have exacerbated the hostilities. A peace proclamation in 1902 officially ended the insurgency, but the U.S. still faced the problem of controlling the southern islands, which were predominantly Muslim. Combat with Moro fundamentalists featured brutalities similar to those seen in today’s asymmetrical conflicts—hit-and-run attacks, personal jihad and heavy collateral damage on the civilian population. Throughout the book, a cast of colorful characters emerges as politics, war and personal ambition become intertwined. General Leonard Wood’s hard-line approach to the Moros seems counterproductive, while John Pershing’s more sensitive tactics would not look out of place in a modern Army counterinsurgency manual. Though the book lacks literary flair, it’s a balanced look into the fog of war, where allies can become adversaries and the question “What did we accomplish?” is still open for debate.

An often-forgotten conflict comes to life in this authentic account of heroism and atrocity, where the difference between rebel and patriot is which side of the line you stand on. 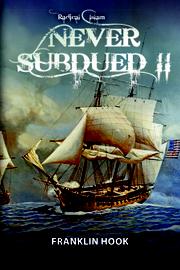 “So sit back dear reader and relax,” writes Hook (Never Subdued, 2011) at the beginning of his new book. “Read on and enjoy a true history with real heroes, real villains, and real outcomes.” The story he proceeds to tell is one that will be unfamiliar even to most of his American readers because this chapter in American history tends to be truncated or skipped entirely in most grade school and high school textbooks. It’s the short but complicated story of the diplomatic and military confrontations between the young United States under the leadership of President Thomas Jefferson and President James Madison and the Islamic and Ottoman states of Tripoli, Tunis, Algiers, etc.—the so-called “Barbary” states that outraged the U.S. by seizing the nation’s ships and enslaving sailors. In chapter after exciting chapter (all of which, in this current edition, is bizarrely presented in boldface), Hook presents a well-researched and well-documented narrative history of the diplomatic and naval collisions between the various Muslim beys and emirs and the various U.S. sailing masters, the captains and commodores who sailed the original small fleet of American frigates to the other end of the world (also expanding his story to include a very spirited account of the War of 1812). He dramatizes the stories of memorable figures like Lt. Stephen Decatur, Commodore Edward Preble, Lt. Isaac Hull, or the more checkered career of Commodore Richard Morris. This is vital, readable history written smoothly and professionally (although the text is in need of a front-to-back edit to fix annoying little details like the fact that Dolley Madison’s first name is misspelled throughout the text), and Hook unites most of his matter with a warning about the present now that the West, once again, faces conflict with the Islamic states.

A vividly drawn history of the clash between the United States and the Barbary states.