I have been writing poetry and short stories since I took a Creative Writing class at Purdue University in 1967. Unfortunately, that was the only class I passed and spent the next three years in the army, including a tour in Vietnam. After leaving the army, I earned a BS in Computer Science from Rutgers and struck off on a career as a professional computer programmer and amateur poet.

I find that my years of writing poetry have affected how I write prose. My wife is always saying to put more narrative into the story. My poetry side keeps trying to pare it down to the emotional bare bones. What I create is always a compromise between the two.

Short stories and poems of mine have been published in Biker Magazine, two compilations by Poetry.Com, The Salal Review, The Scribbler, That Holiday Feeling—a collection of Christmas short stories, and Not Your Mother’s Book on Working for a Living.

My home is in Ariel, Washington, with my wife, two horses, two dogs and six cats.

My website is fredrickhudgin.com. All of my books and short stories are described with links to where you can buy them in hardcopy or e-book form. I’ve also included some of my favorite poems. You can see what is currently under development, sign up for book announcements, or volunteer to be a reader of my books that are under development.

“Readers will find echoes of Kurt Vonnegut, Harry Harrison, and Philip José Farmer (especially the last’s “Seventy Years of Decpop”) in Hudgin’s smart, edgy blend of the sardonic and the apocalyptic. A clever blastoff of a seriocomic sci-fi saga that plays fecund what-if games with technology and social change.”
– Kirkus Reviews 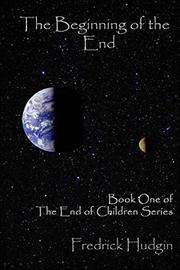 THE BEGINNING OF THE END

After meddling from competing alien groups, humanity creates an astounding invention—prompting a galactic verdict that the dangerous species must be eradicated.

Fantasy/sci-fi author Hudgin (Green Grass, 2017, etc.) launches The End of Children series with the premise that eons ago, an alien expedition—captained by intelligent octopuses of the interstellar Grock Corporation—claimed prehistoric Earth for trading and natural-resource exploitation. The explorers genetically elevated primates, boosting their brain power to the degree that they would ultimately be able to make future commerce deals. But a rival ET mission from the aquatic planet Quyshargo (these aliens resemble mermaids and Black Lagoon monsters) covets Earth as well and subverts Grock’s plan with secret genetic and “dream planters” tinkering. Result: Millennia later, California graduate student Lily suddenly conceives a practical technique for instantaneous travel/teleportation she implements with her boyfriend, Kevin, and classmate Doug. Dubbed the Rosy Transmitter (for the color of its beam), the process is soon sold by a greedy professor to competing world governments, and even the White House envisions it principally as a weapon. The invention alarms the Grock aliens monitoring the planet. Homo sapiens, they believe, are too vicious for tech that could send them rampaging destructively across the universe. After briefly abducting the three students, the aliens begin using a sanctioned, nonviolent genocide technique, spreading a virus that halts human reproduction. Lily is the last woman to get traditionally pregnant (via Kevin) while both are held virtual prisoners by a panicked U.S. government. Hudgin details the next tumultuous nine months with succinct but well-thought-out strokes (whereas other authors might overpopulate the narrative with a high page count) of how Earth society reacts to the paradigm shift of the Rosy Transmitter and imminent extinction through sterility. Readers will find echoes of Kurt Vonnegut, Harry Harrison, and Philip José Farmer (especially the last’s “Seventy Years of Decpop”) in Hudgin’s smart, edgy blend of the sardonic and the apocalyptic. Some may sense a determinedly schizoid tone, as serious extinction concerns (and involved discussions on cloning) contrast with the campy Grock and Quyshargo minions behaving like maritime pirates despite their dire pursuit of enlightened capitalism of a space alien sort. The loose ends and cliffhanger ending point immediately toward the sequel, and, unlike Earth’s people, the material seems very fertile indeed.

A clever blastoff of a seriocomic sci-fi saga that plays fecund what-if games with technology and social change.

What we have here is a failure to communicate

I am a volunteer EMT for my fire department