Gail is a professional coach and emerging writer. As a coach, her specialty is helping leaders be better leaders and helping people transform their lives, change direction, start over or somehow re-invent themselves. She is a certified coach from the Hudson Institute of Coaching and an Associate Certified Coach with the International Coaching Federation.

As a writer Gail is interested in capturing how people think, creating language that is lyrical and using the landscape to convey meaning to the story. She is especially interested in developing characters that convey emotional authenticity and go on a journey, willingly or not, that changes them. Her first novel is ACROSS THE INLET, A Story of Unconditional Love in Alaska.

“A poignant story that explores what it means to be a family and the power of forgiveness.”
– Kirkus Reviews 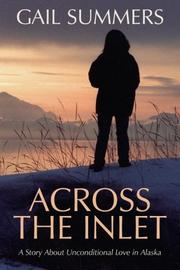 In Summers’ captivating debut novel, family secrets and buried pain threaten to tear three sisters apart as they reunite to care for a dying stepparent.

Abby Miller rushes home to Alaska to say a final goodbye to Bill, her terminally ill stepfather, and lend support to her mother. But as the hours turn into days, and days into weeks, Abby and her sister Alice begin to suspect that their younger sibling, Aurora, lied about the severity of Bill’s condition. It turns out that her assertion that he was about to die was “a scam”—and it’s not the first one that the troubled Aurora has pulled. Since Bill’s diagnosis, she’s siphoned tens of thousands of dollars from her parents’ bank account, which she was able to access by moving the elderly couple into her home. When Abby confronts her, she snaps, “Don’t worry about it”— the same phrase favored by the girls’ abusive biological father, who years earlier left the family penniless. Abby’s mother, meanwhile, is reluctant to cross Aurora, which allows the pattern of emotional blackmail to continue. Abby struggles to control her anger and grapples with a heartbreaking question: can, and should, she fight to keep her family together? Summers doesn’t shy away from complex emotions, and her raw, sparse prose offers readers an unvarnished look at the indignities of death and the complexities of family ties. The development of Aurora’s character is particularly notable: Abby’s youngest sister is manipulative, maddening, and difficult to like, yet she’s anything but one-dimensional. It’s Aurora, after all, who tends to Bill’s festering bedsores in his final days. Flashbacks also introduce readers to a kinder, gentler soul—a sister who, despite her flaws, offered support without judgment and reassurance without resentment. Summers masterfully weaves together the past and present in this absorbing volume, the first in a planned series, and her lyrical, almost spiritual, descriptions of the Alaskan wilderness (“The morning comes with blue sky, dazzling white snow over the Knik hayfields, craggy and sharp Chugiak Mountains, and two moose chewing the bark off the birches in the front yard”) create an evocative backdrop for the drama that unfolds.

A poignant story that explores what it means to be a family and the power of forgiveness.