The family and friends of Gale Gesner are proud to announce I Come to Morning: Selected Poems of Gale Gesner, a slim volume of original poetry by a young woman who died in 1983 at barely the age of thirty. Tucked into books and drawers, these stunning poems were only discovered after Gale’s death. Never before published, they have received a warm welcome from readers of all stripes, who have found meaning, beauty, and grace in the words of a young writer wise beyond her years.

Named Leonora-Louise after her two grandmothers, the poet changed her name to Gale in memory of her father, the esteemed artist Galed Gesner, who had died when she was six. Also an accomplished cellist, Gale was a lifelong resident of Mystic, Connecticut, attending Williams School and Mitchell College.

The poems in this collection were chosen by Gale’s mother, Evelyn Gesner (1915–1987), a Christian Science practitioner, and Harvena Richter (1917–2011), author and daughter of novelist Conrad Richter. At Evelyn’s request, I Come to Morning was edited by Gale’s longtime friend Priscilla Wright Pratt, who died in 2009. It was Priscilla’s wish that her daughter, Catherine, would publish this book, fulfilling at last Evelyn’s vision.

Harvena Richter writes, “[Gale] would not bargain with grief. It was life that mattered, and she set out to learn about life, to nurture a fierce passion for it as had Emily Dickinson some hundred years before.” In these pages, Gale transforms life and nature with indelible imagery. Punctuated by occasional outcries at injustice, her words embody a fierce courage and ever-deepening inner strength. Through her poetry, we come with Gale to the morning she loved, a place of hope, where “even Siberian snows / Know springs.”

Catherine Pratt, publisher of I Come to Morning, graduated from Brown University. A former editor at Houghton Mifflin Harcourt, she lives in Connecticut and Massachusetts. Catherine is most grateful to Bill Grant, former photographer for the Christian Science Monitor, for the striking photos of Gale Gesner used on the dust jacket.

“Meditations and observations from a young writer who died much too early.”
– Kirkus Reviews 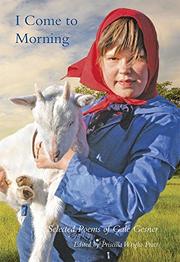 I Come to Morning

Meditations and observations from a young writer who died much too early.

Two short forewords provide biographical information to contextualize this collection of 46 poems, each less than a page in length. The book divides the verses into seven thematic sections, including “Light,” “Outcries,” and, sadly, “Last Poems.” Gesner passed away at the age of 30 from an unspecified illness that lasted 13 years. Readers will have to determine for themselves whether the circumstances of her life will affect their appreciation of her work. Still, it’s hard to downplay the fact that she also endured the loss of her father when she was only 6 years old. The poem dedicated to him reads in its entirety: “A few sun-drenched mornings / A child’s memory erased / A touch, a gesture, a forgotten face.” The length and schematic nature of the text reflect his fleeting presence in her life as well as her acute sense of loss. There are hits and misses in this volume; overall, though, it has an impressive, undeniable depth of feeling. For instance, “Hands on Thanksgiving Day” presents the breaking of the wishbone as the passing down of tradition to different generations. In it, Gesner compares the rough hands of an older relative and the smooth hands of a youngster to different parts of the turkey—symbolism that’s perhaps a bit obvious but nonetheless powerful. “More Than Clouds and Words” features more hand imagery as it describes a girl “who often fetched water / with blossom-white hands / that shook with pain from the bite / pail handles touch.” Here, the author nicely represents a common physical sensation while also suggesting a burden beyond the literal. In “So Deep a Dark,” she portrays night as a shroud and writes: “The eye will place a period / before the sentence is complete.” This statement could symbolize for readers the loss of Gesner’s talent before it was able to develop more fully. However, she also concludes the poem with a hopeful reminder that morning always comes.

Not all the verses here produce the same spark, but certainly enough do to warrant a look.