Gary Durbin is a serial entrepreneur and software industry pioneer. Instead of writing computer code and starting software companies, he now writes, hikes, and advises young entrepreneurs. He has authored four software patents—one for artificial intelligence engine for massively parallel computers—and wrote about measuring operating systems for the National Bureau of Standards. Mr. Durbin started his career as a technologist specializing in operating systems and databases. His first company, Institute for Cybernetic Development, Inc., developed operating system improvements for IBM computers. That company introduced Secure, the first commercial software security product. It was marketed by Boole and Babbage (now BMC Software). Mr. Durbin then founded Tesseract Corporation. Tesseract became one of the leading Human Resource software companies providing significant innovations to the industry such as the Time Relational Database and Real-time HR Transaction Processing. Mr. Durbin left Tesseract in 1995 following its sale to Ceridian. Gary led a research project into the use of artificial intelligence for business systems. That project led to one of the earliest AI patents and an experimental project in computer-aided tutoring. In 1996, Mr. Durbin founded Seeker Software and was its first CEO. Seeker grew rapidly after introducing the first employee desktop, a Web application, in late 1996. Two-and-a-half years later, Seeker was acquired by Concur Technologies. Mr. Durbin holds four software patents, one for distributed inference on massively parallel computers. He has published several technical articles in magazines and journals and authored a special publication of the National Bureau of Standards. He has published short stories and his first novel, Nano-Uncertainty.

“James works to untangle Alison’s code to understand the artificial intelligence buried inside Varabot. He employs his own Visualizer program to do so, with terrifying results. Durbin takes the reader deep inside a tech startup in this novel, covering both its engineering and financial aspects. He does an admirable job of depicting the industry’s gamesmanship, and this gives the book a feeling of complex authenticity.”
– Kirkus Reviews 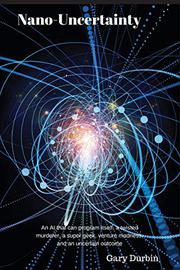 Software industry veteran Durbin’s debut novel captures what happens when technology outstrips the ability of humanity to harness it.

This complex thriller focuses on distributed processing on a large number of coordinated computers—the subject of one of the author’s real-life patents. Philippe Colbert, chief scientist at Distributed Nanotech, is murdered by grad student Alison Green, whose code he’d copied; later, a fellow student said that she hiked alone into the desert. Soon after Colbert’s death, Susanne Anderson, Nanotech’s CEO, hires freelance computer engineer James Forrest to investigate DNI’s Varabot system. While working together, the widowed Susanne and unlucky-in-love James fall for each other. Meanwhile, ineffectual detectives Alberta Lester and Frank Franken are adrift in the California tech industry, which is incomprehensible to them. Also lurking is Alison, who’s determined to erase her program. Susanne finds herself attempting to line up financing while peddling an unproven, and even suspect, system; meanwhile, James works to untangle Alison’s code to understand the artificial intelligence buried inside Varabot. He employs his own Visualizer program to do so, with terrifying results. Durbin takes the reader deep inside a tech startup in this novel, covering both its engineering and financial aspects. He does an admirable job of depicting the industry’s gamesmanship, and this gives the book a feeling of complex authenticity. However, this sometimes results in far too much detail, which bogs down the narrative as a whole. Durbin’s characters are a mixed bag; Susanne and James are well developed and believable, but others are stereotypes—an overreaching sales guy, a greedy venture capitalist—who exist solely as obstacles for Susanne to overcome. Alison, meanwhile, is a familiar mad-genius type who never feels threatening, despite the early murder, and the investigators’ sole role is to come to the rescue in the end.

An intense thriller that’s promising, despite its flaws.

The Stars My Destination