Gary Zuercher’s career path has been quite different than that of most professional photographers because he has simultaneously combined a highly successful business career with a successful career as a professional photographer. He is also a commercial, multi-engine, instrument-rated pilot with more than 2,000 hours logged as pilot in command. For more than thirty years Zuercher provided photography for numerous companies and advertising agencies for publications, advertising, brochures, media, and marketing.

During the same period he produced 15 commercial and product promotional films in which he worked as editor or co-editor and as cameraman and/or photographer, in addition to being the producer. While doing this, he successfully founded, built, and developed both the WaveTek group of companies that pioneered the development of the waterpark industry and the Rain Drop Products company.

WaveTek manufactured wave making machinery and waterslides for swimming pools, installing more than 160 wave pools worldwide. After the successful sale of WaveTek, Zuercher founded and built Rain Drop Products Inc., a firm that was one of the originators in the introduction and development of the Sprayground® and water playground concepts into the public recreation marketplace. For his pioneering leadership in wave pools and Spraygrounds, Zuercher was awarded the Industry Leadership Award and was in the inaugural group of inductees into the World Waterpark Association Hall of Fame.

Over a period of five years, Zuercher took his cameras out into the Parisian night to capture stunningly evocative images of the bridges that span the Seine. Using his artistic eye and sophisticated photographic technique, he created these glorious black-and- white photographs, rich with detail and possessing a clear, luminous quality. Then he spent another year researching and writing the history of the bridges.

No one else has ever photographed all the bridges that cross the Seine in Paris in this way. We don’t see crowds of people or heavy traffic. Nothing obscures the beauty and strength of the structures, the romance and symbolism of the bridges. Shooting in black and white allows the details to shine: the architectural elements, artwork, nearby buildings, trees on the riverbanks, and starry lamps casting paths of light across the water.

He divides his time between homes in Paris and the US with his wife Dominique who is French.

“A superb pictorial evocation of the City of Light, full of dazzling images and intriguing lore.”
– Kirkus Reviews 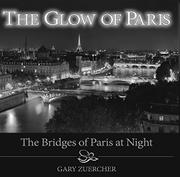 THE GLOW OF PARIS

Pictures of Seine River bridges frame nighttime views of the French capital in this striking coffee-table collection of photographs.

Zuercher, a businessman and professional photographer, presents black-and-white photos of all 35 of the Seine bridges in Paris. The structures run the gamut of ages and architectural styles, from the Pont Neuf, built in 1607 of masonry, with many barrel-vaulted arches and circular Renaissance bastions projecting from its sides, to the Passerelle Simone de Beauvoir, a footbridge completed in 2006 with undulating, gracefully interwoven convex and concave spans. It also includes the Pont Des Arts of 1804, a spindly iron spiderweb that’s a favorite of couples, who festoon it with commitment locks; the Pont Alexandre III, an elegant 1900 edifice with neo-Baroque statuary and beaux-arts streetlamps; and the undistinguished steel girders of 1974’s Pont de l’Alma. Zuercher supplies brief, sprightly accounts of each bridge’s construction and the history of its site. Many of the bridges are heirs to predecessors that burned or collapsed, with the results made even more tragic by the pre-modern custom of building houses right on top of the spans. Others have been the locations of colorful scenes; the Pont au Change, readers learn, “has also been known as chemin des rois et de la guillotine” because it was both the processional route of royals into Paris and the exit for condemned prisoners, who were taken across it to have their heads lopped off. But the book’s centerpieces are its ravishing photos, which are overexposed to give the scenes a palette of bright but warmly luminous highlights, shading into slate and black backgrounds. Zuercher takes several shots of each bridge, capturing both the long sweeps of the spans and the close-up details of stonework, décor and gargoyles; looming in the backgrounds are Notre Dame Cathedral, the Louvre, the Eiffel Tower and other landmarks, all set off to spectacular effect against the riverscape. The end result is an iconic visual record of the heart of Paris.

A superb pictorial evocation of the City of Light, full of dazzling images and intriguing lore.

THE GLOW OF PARIS: THE BRIDGES OF PARIS AT NIGHT: London Book Fair-Honorable Mentioin, 2015