g.c. Ramirez is a navigator of all things energy. She grew up on a ranch in Montana where the trees and horses were her daily companions and taught her how to read energy. As an adult, she pursued energy healing and created many classes and programs, as well as writing several books in this field.

Her launch into the fiction realm started when gia got a picture-feeling that would not leave her. It was the opening scene of The Power of the Crystalline Trees that included Lan with his Boosha. gia ignored it for a couple of years, because she didn't know what it was or who those people were. Then a second one appeared of a girl who was absolutely miserable, sitting in front of a fire and thinking of ending her life. To find out who these people were in these visions she had to write the book. Her life has never been the same.

gia still lives on her family ranch in Montana where she holds programs and classes for Crystalline Kids (of all ages). She's currently working on a card deck for role-playing in the Golden Spiral Series and book two in the series. 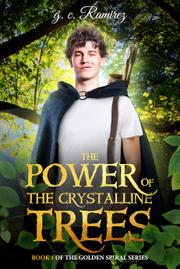 THE POWER OF THE CRYSTALLINE TREES

A teenager undertakes a perilous journey to deliver an enigmatic crystal while a group of child abductors pursues him in this YA fantasy.

Lan lives in a village on post-apocalyptic Earth, devastated by the Great Shift (an event largely unknown to readers). Elderly Boosha has raised him since The Gatherers took away Lan’s parents, though the red-and-gold–uniformed men generally seize children. After her nearly monthlong illness fails to subside, Boosha sends the teen away with three items: a snazzy cloak, a Map Compass, and a crystal cube to deliver—along with the Three Keys—to Asira. Lan, not comprehending any of it, reluctantly leaves just in time to witness The Gatherers ransack his village in search of him. Though Lan believes Asira is a location, she’s actually a girl about the same age in the village Our Place. Asira can heal animals, but the loathsome village director, Kuut, forces her to treat humans, a painful experience that renders her in a near-comatose state. Consequently, she contemplates suicide, but a vision of a boy traveling through the forest gives her hope: She believes he can somehow help her. Lan, meanwhile, faces myriad dangers, from starvation and thirst to The Gatherers who are likely behind him. Ramirez—who also writes books under the name Gia Combs-Ramirez (The Way of Transformation, 2015, etc.)—packs a lot of story into her short series opener. Her accessible prose drives the main narrative while adding an environmental message: A pre–Great Shift trash site hints at humanity’s ruination of Earth. Despite much of the tale’s centering on Lan in the Forest of Dandaka, it’s rife with action, both harrowing (hostile weather) and fantastical (conversing with the Mother Tree). Lan also manages to hone his power—energy he can use for healing or defense, among other things. Though Lan and Asira ultimately find each other, their shared adventure is only beginning. Nevertheless, the engaging story resolves a few mysteries before the first volume ends, including the fate of at least some of The Gatherers’ victims.

A first-rate series opener that promises an engrossing and epic dystopian tale.

The Lion, The Witch and the Wardrobe

The goal of life is to make your heartbeat match the heartbeat of the universe, to match your nature with nature. Joseph Campbell

I read energy from a distance.

The Way of Transformation: Discovering the Divine Map to Unlock Your Highest Potential

Discover how to hack transformation by understanding your transformation patterns as well as others around you. This system is revolutionary for relationships whether personal or in business.
Published: Oct. 10, 2015
ISBN: B014JZEXZY

Transformation: The Emergence of the Crystalline System

The discovery of a new healing modality led to an understanding of the shift the world was going through leading up to 2012.
Published: April 5, 2013
ISBN: B00C8FSVSS