Gene Ferraro writes and produces presentations and events for businesses and organizations. He has also worked in documentary film, and, earlier in his career, taught motion picture production at Stephens College in Columbia, Missouri.

A Catholic, he has traveled widely, and been a volunteer with organizations such as Bread and Roses, which provides meals and outreach services in the city of Lawrence, Massachusetts; Por Cristo, a Catholic non-profit group dedicated to improving children’s health in Ecuador; and Bread and Roses Housing, Inc. which develops affordable housing for working families, also in Lawrence.

He is a graduate of Bowdoin College and has an M.F.A. from Columbia University and has studied at the University of Missouri School of Journalism. He also served as an officer in the U.S. Army Signal Corps, including a tour in the Republic of South Korea.

“Ferraro's lean and expertly plotted debut novel tells the story of several people - families as well as priests - caught in a tangle of violence and corruption that stretches from Massachusetts to the Vatican.”
– Kirkus Reviews 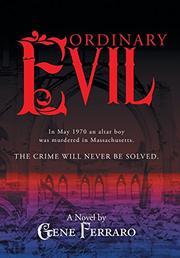 Ferraro’s lean and expertly plotted debut novel tells the story of several people—families as well as priests—caught in a tangle of violence and corruption that stretches from Massachusetts to the Vatican.

In 1965 in Tyre, Massachusetts, a confused, violent 12-year-old boy named Joey Fredette impulsively murders his friend Robbie Daigle and is sentenced to a boys’ psychiatric hospital. He exhibits shy, good behavior until he falls under the sway of charismatic pederast priest Father Bertrand Dascomb, who gives the boy comic books, works out with him in the reformatory gym, and eventually gains his trust. Father Dascomb has also taken on 12-year-old Kevin Hearn as an altar boy at his church. The Hearn boy is only a distraction for the priest, who’s obsessed with Joey and wants to control him once he’s released from the reformatory. It isn’t long after Joey’s release that Kevin Hearn is found murdered, his body dumped under a bridge, and a sharp Massachusetts cop begins to suspect Father Dascomb—and maybe Joey—had something to do with the crime. Ferraro skillfully jump-cuts scenes among his dozen or so main characters, including Kevin’s mother, Ronnie; a closeted gay psychiatry student named Will MacFarlane; and Father Luchino Montefiore at the Vatican, who starts to see the institutional pattern of child molestation and cover-ups with the church. “Scandal is anathema,” one powerful prelate tells Father Montefiore. “It is to be prevented at all costs.” Ferraro confidently knits together his various plotlines, and the queasiness of the story is only heightened by the fact that even though Father Dascomb is a monster, he’s also the book’s most fully realized and compelling character. Readers won’t be able to look away from the rising drama, and Ferraro doles out the plot reveals in carefully spaced intervals.

A vivid, cinematic dramatization of the ripple effects that crime and secrets can have on a small community and a larger faith.

The Blind Man of Seville