Geoff Habiger was raised in the shadow of roaring lions and peacock calls in Manhattan...Kansas, not New York. (That's the Little Apple, not the Big Apple, for those of you playing along at home. And the wild animals came from living behind the city's zoo.) Growing up Geoff loved exploring the woods around his home, sneaking into the zoo (don't tell anybody), and playing baseball and Dungeons & Dragons. He and his best friend, Coy Kissee, would spend hours reading comics, playing all sorts of role-playing games, and talking about books and movies. Geoff stayed in Manhattan for college, getting a B.S. degree in Geology at Kansas State University (Go Cats!). He then attended gradual school in Bozeman, Montana where he didn't graduate, but did meet his future wife, so that worked out well. In 2004 Geoff began two new (though very much part-time) careers in publishing, one as a senior partner in the independent book publishing company, Artemesia Publishing, and the other in a game publishing company, Tangent Games, started with Coy. Through Tangent Games Geoff and Coy have published dozens of role-playing books and a few card games. Geoff published his first book, the Dinosaur Learning Activity Book, a children's coloring and activity book about dinosaurs, through Artemesia Publishing in 2008. His first novels, Unremarkable and Wrath of the Fury Blade, co-written with Coy, were published in 2018. Geoff currently resides in the wilds of the Monzano mountains, east of Albuquerque, with his wife, son, and two cats. His is currently working on sequels to both of the novels already published.

“In this marriage of fantasy and procedural thriller, the team of Habiger and Kissee (Unremarkable, 2018) gives fans of both genres a master class in worldbuilding.”
– Kirkus Reviews 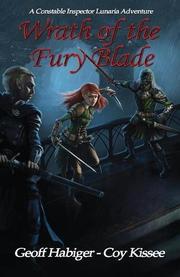 WRATH OF THE FURY BLADE

A killer targets high-ranking victims in a society of elves obsessed with genetic purity.

On the world of Ados, in the elven city of Tenyl, Constable Inspector Reva Lunaria tries to enjoy her day off. She’s summoned, however, to the office of First Constable Aescel for assignment to an important case. First Magistrate Lavalé fey Avecath has been murdered, cleaved clean in half one night in his study. With her longtime partner recently transferred, veteran Reva must work with the inexperienced Ansee Carya, who as a Seeker can investigate any magic used at the crime scene. In the First Magistrate’s study, the two encounter Green Cloaks—or the Sucra—who act as King Aeonis’ secret police. Inquisitor Ailan Malvaceä orders that all documents be collected from the study, which infuriates Reva. In turn, she graciously allows the Sucra to witness a Speaking, during which the corpse is magically induced to offer verbal clues about the murder. In this way, the investigators learn that a black blade committed the deed. At the scene of a second killing—this time Lady Tala Ochroma, the king’s treasurer, is the victim—a healer refuses to save the life of a collaterally injured halpbloed (half-blood). Ansee loses his temper and strikes the elf, revealing the extent to which bigotry divides the citizens of Tenyl. In this marriage of fantasy and procedural thriller, the team of Habiger and Kissee (Unremarkable, 2018) gives fans of both genres a master class in worldbuilding. Everything from idioms (“But tread carefully, Inspector. You are on a narrow branch here”) to fascist racial doctrines mesh in a narrative that pulses with innovation on every page. While much of the emotional heft comes in comparing King Aeonis’ purity laws to those wielded by the Nazis, personal demons also haunt the characters in this series opener. Reva finds herself addicted to the stimulant Wake, and the halpbloed Cedres Vanda desperately wants to reunite with his family despite his wife’s disgust for him. A wider conspiracy puts the kingdom at risk, and the charming, flawed protagonists prove themselves a winning combo worth visiting again.

This rich fusion of crime and fantasy should enchant readers.

Praiseworthy Reviews for Local Authors of "Unremarkable" by Geoff Habiger and Coy Kissee, 2018 Book Review - US Review of Books, 2018

Dinosaurs lived on Earth for over 180 million years. Now, let them entertain you with the Dinosaur Learning Activity Book. Matching, puzzles, mazes, connect-the-dots, and lots of pages to color make learning about dinosaurs and geology fun for paleontologists of any age. With over 80 pages of dinosaur material the Dinosaur Learning Activity Book is perfect for those rainy afternoons, long trips in the car, or a visit to your local museum.
Published: Aug. 1, 2010
ISBN: 9781932926965

Saul’s life was unremarkable until the St. Valentine’s Day Massacre changed it forever. Now the Feds, Bugs Moran, and Al Capone all need him. Saul is desperate to make them all happy and keep his parents safe. That may be difficult when Saul learns that vampires are not just legends.
Published: Feb. 14, 2018
ISBN: 9781932926491