Geoffrey Leigh’s debut YA epic fantasy novel, Siv & the Blood Moon, is a coming of age story of an ordinary girl who must become extraordinary and face her greatest adversaries. This epic fantasy spans 750 years. Inspired by his daughters, Leigh plans a trilogy centered around his young heroine, Siv.

Born and raised in Colorado, Leigh's passion for writing fiction began in high school under the tutelage of Carol Ann Moore, PhD., who instilled within him a love for reading and writing. Leigh states “everyone needs a teacher like Dr. Moore sometime in their life!” Growing up, Leigh loved Tolkien, Dungeons & Dragons, and all things fantasy. He has returned to the days of his youth to bring us this coming of age story set in an epic fantasy: Siv & the Blood Moon.

Prior to becoming an Author, Leigh took three years of creative writing as an undergraduate. He attended the University of Colorado before pursuing another one of his interests – medicine. After his junior year at CU, Leigh started medical school at the University of Texas Health Science Center, San Antonio. He completed a general surgery residency in Dallas at Baylor University Medical Center and then completed a surgical oncology and endoscopy fellowship at Roswell Park Cancer Institute.

Presently, Leigh serves as a trauma surgeon to five ski resorts in Colorado. He spends the off seasons writing fiction. The brilliant scenery of Leigh’s home nestled deep within the Rocky Mountains led to many of the descriptions found within this YA fantasy novel: the forests, the lakes, the boulder fields, the mountain passes, and the dangerous electrical storms, just to name a few.

Travis Stork, MD
New York Times Best Selling Author
Emmy Nominated Television Host:
"As a friend of the author you could say I’m biased but the truth is, I found Siv and The Blood Moon to be a fun and adventurous read whose characters are vividly brought to life page after page. It’s an engaging book that can be thoroughly enjoyed by readers of any age."


Beverly Weiser, Ph.D.
Principle Investigator and Project Director for the Office of Special Education under the
Department of Education Southern Methodist University:
Geoffrey Leigh’s “Siv and the Blood Moon” is a great resource for educators in middle and high school. Teachers can easily pull words out of this amazing literacy masterpiece to teach metaphors, similes, idioms, contextual clues, foreshadowing, predicting, inferencing, synthesizing, irony, ‘author’s purpose’, characterization, visualization, imagination, destiny, and more! Teaching literacy elements using engaging and exciting text is a win-win solution for teachers and students alike, especially when teachers can use the text to build critical thinking skills that are so necessary in our world today. This suspenseful novel will leave adolescents begging to read more!!

Follow Siv's continued adventures in the soon to be released Siv & the Moonstone, www.sivandthemoonstone.com!

To learn more about Leigh, visit his website: www.geoffreyleigh.com 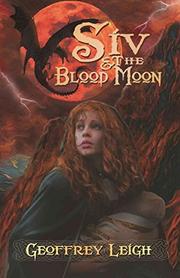 This fantasy debut follows an outcast dwarf as she’s caught up in an epic battle for the realm of Lavendelle.

Near the island of Lindisfarne is a haunted forest, within which is a hidden gate to the magical world of Lavendelle. It’s an enchanting, dangerous place, protected by elves willing to kill outsiders. Only one person, a man named Roarke, has ever returned home to speak of Lavendelle. When the young Drake Scott approaches Roarke about breaching the realm for an adventure, Roarke admonishes him; nevertheless, Drake journeys forth. In Lavendelle, meanwhile, lives a 15-year-old dwarf named Siv, who has red hair and green eyes, like no others of her race. When her aunt Martha falls ill, Siv undertakes a quest for the healing cassava root. This sets her on the path of a prophecy scribed over 700 years ago by the wizards Solomon and Elijah. Solomon has since died, but Elijah is now the powerful and respected head of the Wizard Council. In his youth, he helped remove the evil Malkavic and his goblin horde from power, creating lasting peace in Lavendelle. Now, with Drake on a reckless hunt for treasure and excitement and lunar cycles influencing good and evil, it’s time for unlikely heroes to arise. In his debut, author Leigh employs many time-tested fantasy components—dragons, cursed swords, submissive goblin underlings. Yet he writes with such a clear, earnest voice everything feels quite fresh. There’s grandeur in lines such as “evil flowed like lava from the volcano and entrapped...Lavendelle in its fiery grip.” While most of Leigh’s prose will enchant younger readers, there are sudden moments of very adult violence; in one scene, a bear is sliced and diced. Leigh also explores psychological elements, like the goblins being “vessels to be programmed” and the ethics of sharing information for the greater good. Overall, Leigh practices great dramatic economy, allowing everyone in his cast to fulfill his or her potential for good or evil.

This inventive, tightly plotted debut will entertain fantasy lovers of any age.