Geonn Cannon is a male author who grew up in Oklahoma, thousands of miles from the nearest coastline, who found his calling in stories about women who live on an island in the Pacific Northwest. In 2010, Geonn became the first male author to win the prestigious Golden Crown Literary Society Award for his novel "Gemini." In 2015, he won it again for "Dogs of War." He was also invited to write an official tie-in novel for the television series Stargate SG-1. He is currently working with Tello Films to turn his novel "Riley Parra" into a web series. His first name is pronounced just like "John." 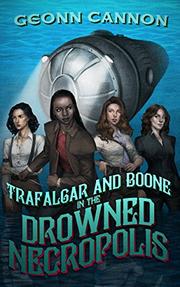 In Cannon’s alternative version of early-20th-century London, an invisible spy walks the streets, airships are a preferred form of travel, and two rival explorers join forces to learn who is trying to kill them and why.

In Ethiopia, men abduct a strong and clever girl to sell her. One of the men sees the girl as an ideal vessel for an evil spirit whose coming will forever alter the world, but the girl escapes, eventually establishing herself as Trafalgar the explorer. Lady Dorothy Boone grew up knowing she was different from other girls. She felt most comfortable with a sword in hand and markedly uncomfortable at the idea of being married off to a man. Fortunately, her spirited grandmother Eula teaches her to embrace her unique qualities and bequeaths her a fortune so that Boone can become a globe-trotting archaeologist—that is, when she’s not home in London with her attendant and lover, the mysterious and magical Beatrice Sek. Boone and Trafalgar meet and butt heads due to their similar professions and strong wills, but after a mysterious killer tries to murder them both, as well as other well-known London explorers, the two unite to solve the mystery. Author Cannon (Cinder and the Smoke, 2015, etc.) populates his story with a bright, complex array of characters, mostly women and many LGBT and/or of color. It’s refreshing to see such classically underrepresented groups overcome adversity and save the day in smart, sexy style. While graphic scenes of sex and violence make this one for more mature readers, one won’t find many better examples for young girls of the importance of being true to oneself than Trafalgar and Boone.

The Virtuous Feats of the Indomitable Miss Trafalgar and the Erudite Lady Boone: Kirkus Star

The Virtuous Feats of the Indomitable Miss Trafalgar and the Erudite Lady Boone: Named to <i>Kirkus Reviews'</i> Best Books, 2015

Rainbow Hub's Review of "Trafalgar and Boone", 2015 Female Badassery: Indie writers who place women at the heart of adventure novels, 2015