My own self portrait utilizing a mirror

“A superb record of a photographer’s love affair with New York.”
– Kirkus Reviews 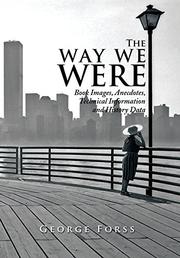 THE WAY WE WERE

The many faces of New York City are captured vividly in this stimulating collection of pictures and commentary by an acclaimed photographer.

Forss taught himself photography while working as a messenger in New York in the 1970s and then started selling his prints on the streets; commercial assignments, gallery shows, and books followed. The over 70-odd black-and-white pictures collected here cover a wide range of scenes. We see zebras wrestling at the Bronx Zoo; sunlight filtering through the leaves in Central Park; July Fourth fireworks over the harbor; enigmatic double exposures, composed for a Saks Fifth Avenue campaign, of languid mannequins in glittering dresses hovering over prosaic streetscapes. There is an intimate photo of a cooped-up ivy plant gesticulating wildly at the bleak view out a Brooklyn apartment window, grand portraits of Manhattan skyscrapers bathed in stunning sunlight, and, most New York–ish of all, photos that blend intimacy and grandeur, including several shots of the Brooklyn Bridge soaring over narrow neighborhood streets and an exuberant scene of kids and a dog romping in the Washington Square fountain beneath the triumphal arch. Then there are the atmospheric Manhattan cityscapes, Forss’ trademark. From on high we see skyscrapers glowing with lights, melting into an indistinct horizon in the dusky, chiaroscuro twilight; from below we see lower Manhattan erupting from the harbor’s waterline. The most iconic photos spotlight the lost twin towers: in one we see them marshaling a phalanx of skyscrapers, gleaming in evening sunlight against ominous clouds; in another, they center a mysterious, dreamy skyline, seen in outline through light and fog from across the Hudson. Forss comments on each image in a paragraph or two, with technical details and narrative snippets that have a lyrical matter-of-factness. (“I was watching and waiting for some ‘magic’…with my camera ready to take a picture, when this Bowery lady raised her drink in a salute.”) The book’s one problem is the small size and indifferent quality of the reproductions; still, these images are arresting enough to make one hope that they will be redone in a glossy coffee-table format that can do them justice.

A superb record of a photographer’s love affair with New York. 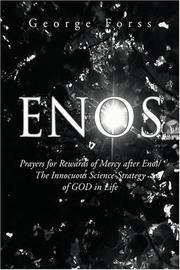 ENOS: Prayers for Rewards of Mercy After Enos

Forss’ (The Way We Were, 2014) personal tome concerns aliens, God, and ideas for humanity.

After a lengthy introduction about the author’s intention to take the reader “on a logical journey back to Godhead,” the book begins in 1976 with the author living in New York City. He discovered that June 28 would be “the start of the most pivotal day of my life.” The city was alive for the upcoming bicentennial, and the author tried selling photographs to tourists. The task wasn’t going so well when he encountered a former hippie named Buffy, who had some years earlier related an experience involving aliens and their immense wisdom. Though Buffy claimed her experience was just a trip, the author felt differently; in order to adequately tell Buffy’s story, he had to “ask for it from God somehow, as a pure spiritual quest.” And so he did. Thus, thanks to the author’s efforts, the aliens revealed valuable information for humanity, such as the need to not subscribe to any particular religion as well as the fact that “THERE IS A RICH WORLD BEYOND THE ATOMS OF ALL LIVING CELLS.” But the alien adventure does not end there. Incorporating drawings, poems, black-and-white photographs, and an investigation into the thoughts of different individuals (e.g., a dying man), the recollected experience is expansive to say the least. From there, though, things get even stranger, particularly in thornier sections, as when the aliens explain that “SOME HOMOSEXUALITY IS SIMPLY NOTHING MORE THAN A SCRUMPTIOUSLY HORNY CALLING FOR SEX WITHOUT THE NEED FOR A PROUDLY DISPLAYED LOVER OR FAMILY COMMITMENT IDEAL.” Patient readers may nevertheless find moments of intrigue, like concepts presented by the aliens that are explored later in the author’s own words: “The Aliens say that the future and the past are places! This means that the past is very much alive in some area and so is the future!”

Readers willing to endure choppy statements and a profusion of capital letters will come away with nuanced, occasionally controversial, ideas about life and existence.

Semi-retired Owner of Ginofor Gallery in Cambridge established in 1989