George Bradley owns a digital advertising firm in San Diego. He holds an MBA from University of California, San Diego and a BS in Computer Science from Rutgers University. In the past, George has worked for companies such as Google, Macmillan Publishers and founded companies in educational technology. When he’s not working or writing, George spends time traveling and practicing Stoicism in his daily life.

“A reinvigorated, modern approach to a reality-based philosophy.”
– Kirkus Reviews 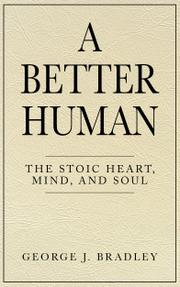 A new look at the ancient ideas of Stoicism.

Debut author Bradley maintains that Stoics have gotten “a bad rap” over the centuries, mainly for propounding a worldview that seeks acceptance, happiness, success, and even greatness in a framework that has nothing to do with gods or the supernatural—instead, it’s firmly grounded in the limitations of the observable world. The author presents this philosophy, which was founded by Greek philosopher Zeno and propelled onto the larger world stage by Roman writers Seneca and Epictetus, by focusing on its “Heart, Mind, and Soul”—that is, the basics, refinements, and “deeper touchstones” of a way of thinking in which realism guides but never crushes optimism. The key to Stoicism, as the author presents it here, is to focus on things that one can directly manage: “Spend energy on those things you’re able to affect so that you put yourself in position to succeed,” Bradley writes. He goes on to instruct readers on the practical applications of such precepts, such as reimagining obstacles from a more helpful perspective or breaking problems up into smaller parts and attacking each one in turn. A crucial element—present in the writings of ancient Stoics but effectively given extra emphasis by Bradley—is the bravery to face reality head-on: “All the opportunity in the world could be present,” he writes, “but without then attacking the problem in a fearless way, you might sense a creative possibility but never actually motivate yourself to create.” However, this highly readable work isn’t solely about facing one’s problems; in its last and most intriguing section, the author discusses “the exploration of the soul” using Stoic ideas. These final pages are clearly and invitingly written, much like the rest of the book.

A reinvigorated, modern approach to a reality-based philosophy.