THE ARTIST AND NOW WRITER
Rothery is a graduate of the University of Tennessee with a major in business and marketing. After serving in the US Air Force as a commissioned officer (discharged with the rank of Captain), he became professionally involved with art when he opened galleries in Knoxville, Tennessee (ROTHERY))that became the center of art exhibition in the surrounding geographical area for the next twenty-two years.
After another career in manufacturing representation (ROTHERY ASSOCIATES) he retired and became a professional maritime artist. He picked up brush and canvas to create oils and acrylics reminiscent of the sailing and boating he loved growing up every summer on the New Jersey shore, and as an adult on the South Carolina coast. His paintings are in private and corporate collections from Massachusetts to Florida and from the Carolinas to Texas. He has been in many national juried shows and his work has appeared in American Artist The Complete Painters Handbook, Life on The Water, Workshop, Homes and Living, and a number of newspaper articles.
The idea for the series of Mr. Halston Mystery Thrillers (starting with 'A SUMMER AGAIN') was in the back of his mind for years. From time to time he played with the idea of actually getting serious about it, and really working on the old manuscript he had toyed with along the way. One day he actually decided to get serious and see what happens. What happened is, he really fell in love with writing. Now he is consumed with writing and the reviews he has received on 'A SUMMER AGAIN'. The number two in the series is already underway. So what happens now is all up to the readers. 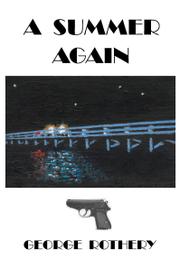 In Rothery’s debut thriller, a U.S. Air Force colonel does a favor for his CIA pal and gets entangled in a plot to assassinate a prince.

After losing his wife and son in a car crash, Greg Halston immersed himself in his work for three years, running Atlanta-based Halston Air Freight. He sells his company in 1969, which makes him independently wealthy, so he decides to revisit New Jersey, where he spent his youth. But first, he sees Danny Foster, who took a bullet for him during the Korean War and later joined the CIA. Danny introduces him to the enigmatic “Mr. Smith” of the State Department. Smith asks Greg to keep an eye on Henry Viller, who has a summer home in the New Jersey town where Greg’s headed. Smith says that “one of our people in the Middle East” overheard a cryptic remark about Viller, saying that the man “will know the wrath of the devil in his pocket”—whatever that means. Greg visits Viller’s place and encounters the man’s daughter, Anne. It also turns out that Greg’s old love, Marion, is the widow of Viller’s brother, Donald. Greg is smitten with both women, but he soon realizes that his mission is drawing the wrong kind of attention—someone is following him. Getting close to Viller also puts Greg in the company of an Arab prince who, it turns out, is marked for death. Greg is an unusually unassuming spy in Rothery’s equally modest thriller. For example, after Danny outfits Greg with a Walther PPK (also James Bond’s gun), he often deliberates on whether he should carry the pistol or leave it in his hotel room. The story also offers more familiar spy-thriller moments, as when Greg tries to decipher a card with the word “Mephistopheles” on it. Romance abounds, as well, particularly when circumstances shift the protagonist’s focus to one woman. A couple of plot turns near the end of the story are predictable, but there are rock-solid action scenes sprinkled throughout, giving Greg the chance to put his Walther to good use.

An appealing, unassertive hero puts this tale a notch above standard spy fare.