Gerald W. McFarland, historian and novelist, was born in Oakland, California. He received his B.A. from the University of California, Berkeley and his Ph.D. from Columbia University. During forty-four years (1964-2008) as a member of the University of Massachusetts Amherst's History Department he published extensively on diverse topics in his field. Among his books are a prize-winning history of five generations of a family involved in westward migration, "A Scattered People: An American Family Moves West" (Pantheon Books, 1985); a true crime story about a man who returned to save his confessed killer from being hanged, "The 'Counterfeit' Man: The True Story of the Boorn-Colvin Murder Case" (Pantheon, 1991); and a description of Greenwich Village as it became America's Bohemia, "Inside Greenwich Village: A New York City Neighborhood, 1898-1918" (University of Massachusetts Press, 2001).

McFarland turned to writing fiction beginning in 2010. His novels "The Brujo's Way" (2013) and "What the Owl Saw" (2014), both published by Sunstone Press (Santa Fe, NM), are the first two volumes in the Buenaventura Series. They follow the adventures of an eighteenth-century Spaniard, who is secretly a powerful brujo capable of transforming himself into hawks and owls, but who carefully maintains a public identity as a government official in Santa Fe, New Mexico. The novels grew out of McFarland's experiences traveling in the Southwest and his decades of practice of Buddhist meditation and Hatha yoga, as well as his interest in shamanism and Pueblo Indian culture. 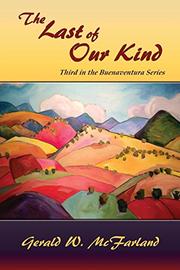 The Last of Our Kind

The final installment of the adventures of an 18th-century sorcerer in New Mexico.

McFarland (What the Owl Saw, 2014, etc.) continues his series of mystical historical novels featuring the heroic young brujo Don Carlos Buenaventura, who, in 1706, lives in the Spanish Empire’s town of Santa Fe (now in modern-day New Mexico). He hides his sorcerous identity from other members of his community by taking the alternate identity of Don Alfonso Cabeza de Vaca, an ordinary young man from an aristocratic Catholic family. For some of his career, Don Carlos has also been hiding from a fellow sorcerer, Don Malvolio, who hounded him through many lifetimes and even killed him in his last existence. As this concluding volume opens, Don Carlos continues to juggle the natural and supernatural sides of his life: he’s pursuing a new career as mogul in the West Coast’s booming real estate market and a romantic relationship with the beautiful widow Inéz de Recalde. More recently, though, others have been pursuing him: Inquisition officials have heard rumors of a powerful brujo in Santa Fe and have sent a commission to ferret him out. McFarland’s genial, involving narrative vividly realizes the world of Colonial Santa Fe, and its people feel very believably of their time. In the supernatural segments, there’s never much doubt that Don Carlos will prevail (“When I’m in good form, I make for a challenging opponent,” he says at one point), but the scenes remain gripping. McFarland is quite skilled at providing seamless background information so that each of the books in the series could, in a pinch, stand alone. However, readers are nonetheless advised to read the first two installments before beginning this third, as a great deal of nuance, especially regarding Don Carlos’ knowledge of and belief in himself, would otherwise be lost.

A very satisfying blend of the historical novels of James Michener and the spiritual accounts of Carlos Castaneda. 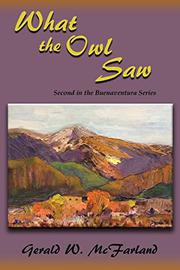 WHAT THE OWL SAW

In 1706, Don Carlos Buenaventura, a deliberative, noble figure, is currently in his sixth lifetime. He lives in Santa Fe, New Mexico, where he follows “The Brujo’s Way,” a pure, heroic philosophical approach that clears his mind, allowing him to use his mystical powers, which include manipulating energy and transforming himself and others into various kinds of animals. Through the centuries, he’s opposed the machinations of a fellow super-being, Don Malvolio. In this latest novel, Don Carlos is aided by a woman named Inez, who also possesses rudimentary bruja powers, although of a different nature than his own. They, along with other allies, encounter a trio of newcomers to Santa Fe: a magician and two dancers. Don Carlos finds them intriguing, but he’s suspicious that they may be his enemy’s disciples. As in the previous volume, McFarland gives readers much more than a mere contest between good and evil sorcerers in the distant wake of the Pueblo Revolt of 1680. Along the way, he incorporates a great deal of Santa Fe history and culture, as well as plenty of Pueblo mysticism. In the tradition of Carlos Castaneda’s Don Juan books, characters often expound on life and philosophy; however, in that same tradition, it’s at the expense of natural-seeming dialogue or interactions. Don Carlos, in particular, comes across as disconnected from the exigencies of daily reality (other characters actually comment on it), which makes the book’s dramatic ending feel a bit jury-rigged. The story’s final act feels too much like a bridge to a potential third installment to deliver as much satisfaction as it otherwise might have. That said, the bulk of the book is every bit as fascinating and comprehensive as its predecessor.

A lavishly detailed, if slightly wooden, look at the mystical underside of a vanished Santa Fe world. 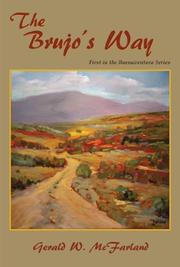 McFarland’s (Inside Greenwich Village: A New York City Neighborhood, 1898-1918, 2001) novel chronicles the adventures of a sorcerer in the American Southwest during the late 17th and early 18th centuries.

It’s not uncommon for picaresque novels to begin with the birth of their hero, as this first volume in McFarland’s Buenaventura series does. It’s far less common for the hero to be humming his favorite songs while he’s being born. Don Carlos Buenaventura manages it, however, because he’s actually an old and experienced brujo—a reincarnated sorcerer who embarks on his sixth life as part of an aristocratic family in 1670s Mexico City. As a teenager, he has a series of adventures along the Camino Real and in Santa Fe (now in New Mexico) in the wake of the 1680 Pueblo Revolt. He gradually recovers memories of his past lives and recalls the dangers of his present life—his superhuman nature might be detected by humans, for example, or by members of the evil Moon Moiety, an order of brujos dedicated to the eradication of Don Carlos’ Sun Moiety and led by the evil Don Malvolio. In the course of McFarland’s crowded but expertly paced narrative, Don Carlos encounters card sharps, warrior Apaches, evil sorcerers and a beguiling swordswoman named Inez who teaches him, among many other things, the art of fencing. She speaks more accurately than she knows when she tells him that a “little mystery in a relationship can be a good thing.” Although Don Carlos may be entering his sixth life, McFarland engagingly portrays him as a naïve youth, innocent in the ways of his mysterious craft; he may be able to transform himself easily into a hawk or an owl, but the restraint and wisdom that his master Don Serafino preaches comes much harder to him. Like any good adventure hero, he’s instinctively both a lover and a fighter.

An engaging adventure novel filled with action, mystery and romance.

A SCATTERED PEOPLE: AN AMERICAN FAMILY MOVES WEST: Colonial Dames. One of the three best books in U.S. history published in 1985., 1985

A description of Greenwich Village in the years when it became known as America's Bohemia. The distinctive feature of this history is that guides readers deep inside the Village to visit the rich diversity of its population--not just avant-garde artists, political radicals, and nonconformists, but Italian immigrants and African Americans in the South Village, well-to-do Protestant patricians on or near Washington Square, and Irish-Americans in the West Village. Clashing expectations about what constituted proper behavior in the neighborhood's public spaces--especially streets, parks, and saloons--often led to political rivalries and efforts by the more privileged Villagers to impose middle-class mores on their working-class neighbors. But it was precisely the mixed-class, mixed-ethnic, and mixed-race character of the Village that enabled its Bohemian rebels to explore nonconforming behaviors of their own.
Published: Aug. 28, 2001
ISBN: 978-1558492998

"A Scattered People" is a true-life saga that takes us from colonial settlements along the East Coast to the California shore at the dawn of the twentieth century. Its cast, drawn from five generations of a single, real family, is as rich as a historical novel's: a born-again Christian farmer in 18th-century Connecticut; a Davy Crockett-like rifleman in frontier Virginia; a New York infantryman at Antietam; a bold teen-age girl who forsakes a comfortable home in Kansas to teach in an isolated one-room school on New Mexico's ranching frontier. These individuals become our witnesses for the era's key events: the American Revolution, the Indian wars, the Gold Rush, Bleeding Kansas and John Brown's raid, the Civil War, the Chicago Fire, and the construction of the transcontinental railroad. By fits and starts, by foot and oxcart, covered wagon and rail, the succeeding generations of this family made their way west. What motivated men and women to take the risks of such moves, and what actually awaited them in each new home? Through these stories, "A Scattered People" gives us an intimate and surprising new sense of the meaning of the American Dream.
Published: Feb. 15, 2000
ISBN: 978-1566632973

Six feet tall and weighing only twenty-two pounds, T.T. Mann is the perfect protagonist for this light-hearted take on the detective genre. Unlike the hard-boiled private investigators of noir detective fiction, T.T. is a gentle fellow who is shy with women, but he's not without his resources, notably his excellent martial arts skills. With help from his girlfriend Rosie and his brother Flat Mann, T.T. deals entertainingly with three dangerous and daunting cases that arise in San Francisco in 1955.
Published: Aug. 13, 2018
ISBN: 978-1-94573-67-8

The "Counterfeit" Man: The True Story of the Boorn-Colvin Murder Case

One of the most unusual murder cases in American history, the Boorn-Colvin mystery has long fascinated readers, writers, and criminologists. This true story began in 1812 when Russell Colvin disappeared from Manchester, Vermont, after a savage argument with his disreputable brothers-in-law, Stephen and Jesse Boorn. No body was every found, but after seven years of mounting scandal that included the public censure of Colvin's faithless wife, a town feud, and ghost sightings, the Boorn brothers were arrested. Stephen Boorn, under great duress, first confessed but soon retracted his confession. Nevertheless, he was convicted of murder and slated to hang. Then at the last minute his conviction was overturned when a man claiming to be Russell Colvin was found in New Jersey and returned to Manchester. But was he really Russell Colvin, as he claimed and as the townspeople believed, or was he a hired imposter, as Jesse Boorn boasted many years later? "The 'Counterfeit' Man" reviews the evidence in all its often bizarre and humorous detail.
Published: April 13, 1993
ISBN: 978-087023-837-6