Gerrit Verschuur is a well-known professional radio astronomer, who has published a dozen books including, most recently, The Invisible Universe (3rd edition – Springer, 2015). During his research career spanning half a century he was the first to carry out a search for radio signals from extraterrestrial intelligence (ETI) that had a chance of actually detecting another civilization. With the cooperation of Carl Sagan, Verschuur published the results in the journal, Icarus in 1973. Since then, while writing close to 100 technical papers based on his research into the nature of interstellar medium and popularizing astronomy through nearly 100 magazine articles, he continued to ponder the issue of whether ETI actually exists. To this end he embarked on a journey of exploration into more esoteric realms of human experience in the search for evidence that ET is in contact with human beings. His adventures lead to experiences in human-dolphin communication, experiments with sensory deprivation, and interviews with individuals who claimed to have made contact with ET. As a result of his experiments he was forced to consider the possibility that our position on planet earth may be unique in the Galaxy and our first responsibility, even as we consider how to make contact with aliens, is to make sure that our species continues to survive. In this regard he draws upon the subject of several of his other published book including Impact! The Threat of Comets and Asteroids (Oxford, 1996), Hidden Attraction: The History and Mystery of Magnetism (Oxford, 1993) and Cosmic Catastrophes (Addison Wesley, 1978).

“Verschuur "builds surprising bridges between seemingly disparate ideas, offering, for instance, that SETI scientists, dolphin researchers, and Christians are all using different methods but looking for the same thing—something beyond themselves/Earth/reality, i.e., truth, which they all agree is still out there. Results of his experiments are largely inconclusive but raise questions about human nature and the possible implications of extraterrestrial life.”
– Kirkus Reviews 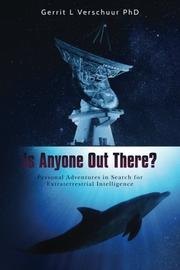 IS ANYONE OUT THERE?

As a professional radio astronomer, Verschuur began seeking signs of extraterrestrial intelligence by listening to the sky, hoping to hear an alien noise among the dissonance. Though the scientific jargon here may be a bit difficult for lay readers, Verschuur quickly moves on after concluding that this was like “looking for an alien needle in the cosmic haystack.” Discouraged by the odds of making meaningful contact through astronomy and disenchanted with the closed-minded, politically motivated limitations of the Search for Extraterrestrial Intelligence group, he embarked on an unconventional journey. An admirer of 1960s dolphin communicator John Lilly, Verschuur posits that truth-seeking requires a suspension of one’s own disbeliefs as well as experiential experimentation. He concedes, however, that “in practice this is very difficult because we become so bound up in what we believe to be true that it is usually impossible to see another point of view.” Nonetheless, he proceeded in his search for truth, going from sensory deprivation tank sessions to meetings with a spiritual communicator to studying Carl Jung’s theory of the collective unconscious. Verschuur suggests that perhaps extraterrestrial communication may be achieved through internal searches and forms of telepathy. Strictly objectively scientific–minded readers may find some of his illuminations difficult to process. Yet Verschuur is ever cognizant that, while his methods give him more freedom, they also put him inside the experiment and thus prevent him from looking at it objectively—bias he concedes. He nevertheless builds surprising bridges between seemingly disparate ideas, offering, for instance, that SETI scientists, dolphin researchers, and Christians are all using different methods but looking for the same thing—something beyond themselves/Earth/reality, i.e., truth, which they all agree is still out there. Results of his experiments are largely inconclusive but raise questions about human nature and the possible implications of extraterrestrial life.

Opens interesting doors and may inspire alternative ways of searching for truth, though the answers here leave something to be desired. 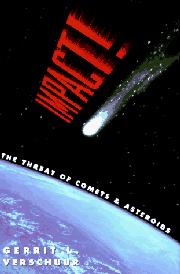 Verschuur, an astronomer (Hidden Attraction, 1993), offers a detailed and alarming account of the meteors and comets that have struck the Earth in the past, with devastating consequences, and reminds us that such disasters are likely to reoccur. He begins his account in 1980 with the discovery of an anomalous concentration of the element iridium at the geological boundary between the Cretaceous and Tertiary eras—the point at which the dinosaurs became extinct. Rare on Earth, iridium is far more common in comets and meteors; this discovery led to the theory that a massive comet striking the earth with the impact of 20 million hydrogen bombs led to the death of the dinosaurs. At first reluctant to accept the concept, many geologists were eventually brought around by the discovery of a massive impact crater near Yucat†n. Verschuur then examines both the geological and astronomical evidence for frequent large impacts: the presence of other craters on Earth (145 had been identified by 1995), the prevalence of craters on other bodies of the solar system, the large number of astronomical bodies in near-Earth orbits, historical accounts of comet or meteor impacts. Verschuur places great emphasis on the possibility of a large, devastating strike in the near future. He also gives particular attention to the consequences of an ocean impact (in fact, the most likely scenario), with huge tsunamis crashing hundreds of miles inland. And he considers courses of action we might take, emphasizing a program to detect (and possibly deflect) the menaces from space. Verschuur argues that we should seriously entertain the prospect of moving some of Earth's population off the planet, to allow the human race to survive an unpreventable large strike. Occasionally overblown, often jumpy in its organization, this is nonetheless a strong treatment of one of the key scientific discoveries of our time. (40 halftones, 3 linecuts, not seen) 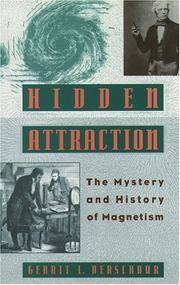 Using the story of magnetism as his framework, Verschuur (The Invisible Universe, 1986—not reviewed) discusses—from the vantage point of a committed propagandist for the scientific method—our historical journey from superstition to physics. Like a fusty old uncle who's nonetheless immensely learned and ultimately charming, Verschuur takes us by the hand and leads us from the almost alchemical experiments of the first true scientists, who explored the properties of lodestone, through the great pioneers of electricity (Faraday, Oerst, and Ampäre, whose Kantian belief in the unity of natural phenomena led to the fusion of electromagnetism) to a brief primer on supersymmetry and the Theory of Everything, as well as on his own work in detecting the magnetic fields of galaxies. Displaying both his prickly disdain for the superstitious and an enthusiastic, almost naive approach to his scientific heroes, Verschuur sprinkles his text with fascinating anecdotes and well-chosen illustrations. Thumbnail biographies of principal scientists cleverly demonstrate how their backgrounds influenced their work (for example, the Protestantism of Faraday insisted on direct experience of the Bible without a priestly interpreter; similarly, the scientist chose to dispense with earlier, eventually disproved, hypotheses about electricity and to begin with the direct experience of experimentation). Repetitive and often stylistically clichÇd (``to make a long story short''; ``the moral of the story is,'' etc.); still, an entertaining, informative history that doubles as a solid guide to the nature of magnetism and electricity. (Sixteen halftones, seven line drawings.)

IMPACT: THE THREAT OF COMETS AND ASTEROIDS