For more than a decade, Canadian poet Gordon P. Bois had written extensively. Regrettably, being his own worst critic, he destroyed the bulk of his work in the fall of 2001. Encouraged by professors and peers alike, Bois started to write again during the winter months of 2002.

Fast-forward, Canadian poet Gordon P. Bois was born on November 9, 1969, in Espanola, Ontario, Canada. For many years, Bois has remained underground, toying and tinkering with the writer's craft. Since 2009, Bois has authored nine volumes of poetry, prose and experimental texts; a collection of inspirational quotes, and a volume of point-of-view statements on the writer's craft itself. While Bois's poetry embraces the darker side of human nature, he firmly believes the written word to be both invigorating and illuminating. Of late, he's come to the surface with select writings in tow, to share with the world.

“The new volume from Bois (Murdering the Third, 2015, etc.), a Canadian poet, lives up to its title…A great deal of emotion does register in these pages, connecting to a handful of themes: the pulls of eros/thanatos, the domestications of married life, violence in narrative and language, and desire for literary recognition…An overfull outpouring of unchecked verbiage.”
– Kirkus Reviews 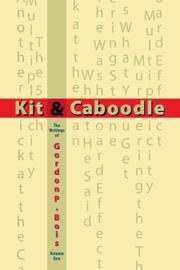 The new volume from Bois (Murdering the Third, 2015, etc.), a Canadian poet, lives up to its title; it comprises nearly 750 pages of lyrics, acrostic poetry, one-liners, and inspirational quotations.

Bois has a need to write—as a release from pain, as a distraction from “stressors” in life (so noted in a poem titled “Blessed Curse”), and as a means of shouting when real life accepts only quiet conversation. The short-lined, imaginative entries play with sound and enjoy puns. The speaker who deems himself a “crass and cocky word jockey,” for example, can rename his life “insurance” policy an “endurance” policy. The flip tone and slant rhymes can be fun, though rehashings of sexual urges become abrasive. Subtlety is lacking in many lines about the “wondrous play things” of women. “Oh labia majora, oh labia minora / You’re my life source; / the very driving force,” for one instance, falls short of an ode, despite the repeated exclamation and rhyme. “Surprise!” rehearses the same territory: “You were like a fun-filled surprise bag, / I was so wild-eyed that I began to drool.” A great deal of emotion does register in these pages, connecting to a handful of themes: the pulls of eros/thanatos, the domestications of married life, violence in narrative and language, and desire for literary recognition. A raging intensity seems, at times, to fuel writerly inspiration: “I’ll write with a passion so strong it extinguishes that which I hate.” The speaker, a self-proclaimed “word prick,” holds nothing back as he “shanks bodies of blank pages / Bleeds out black rivers.” In some of the later poems, words in all caps—expletives and others—insist that in poetry, everything is condoned and possible. Would that the quieter moments could resonate more noticeably, as in the haunting song of “The River: My Bride,” where the “black, watery tomb” is a “velvety friend.”

An overfull outpouring of unchecked verbiage.

The Edge... there is no honest way to explain it because the only people who really know where it is are the ones who have gone over. ~ Hunter S. Thompson

Another Kick At The Can

A diverse collection of poetry that explores a myriad of emotions associated with relationships, and the lessons learned by them.
Published: July 13, 2009
ISBN: 978-1519534286

Although he is only a novice poet, Gordon Bois has written extensively for more than a decade but regretfully, being his own worst critic, he destroyed more than four hundred poems, the bulk of his work, in the fall of 2001. Encouraged by his professors and peers, Bois started to write once more during the winter months of 2002. Bois shares his collection of more than three hundred poems in The Revolving Door divided into five sections: The Light Side, where he discusses his loves gained and loves lost; Off The Cuff, which is full of many free flowing ideas; Short Shorts, filled with short descriptive sentences of key words; Fairy Tales, which is about wanting more in life and The Dark Side, that delves into withdrawal and tough times. Thankfully, Bois finds himself fueled once again to write, having made a promise to himself and others that he would resume writing more extensively and not be so critical of his work. This time, Bois wants to share his poetic style with others and be part of the writing culture, something he has denied himself for so long.
Published: Feb. 11, 2009
ISBN: 978-1440119828

A book of inspirational quotes; matter-of-fact statements, which are based on the author's life experiences and lessons learned, observations of goings-on's in the world around him, as well as teachings adapted from others.
Published: Nov. 9, 2015
ISBN: 978-1518738708

What I See Is What You Get

Gordon P. Bois shares his most comprehensive collection of poetics to date in What I See Is What You Get; divided into nine sections, paying homage to the nine muses of Greek mythology.
Published: Jan. 31, 2011
ISBN: 978-1518672927