Greg Harm was born and raised in Lincoln, Nebraska. He attended Lincoln Public Schools, graduating from Lincoln High School in 1971. Harm spent his young adulthood working as a railroad track laborer, an apprentice box-car mechanic, a factory worker, a forklift driver and a plant maintenance mechanic apprentice. He also spent some time attempting to farm on an acreage, but that was never a big success.

Following a partially-disabling auto accident in 1987, he attended the University of Nebraska-Lincoln, majored in Political Science, with minors in History and English. Following his graduation in 1991, he and his wife moved to Austin, Texas. Harm worked for the State of Texas as a paralegal and sometimes research analyst. He retired after 23 years. During his tenure with the State, he enrolled in a paralegal certificate program at Texas State Univeristy and eventually earned a Master of Arts degree in Legal Studies and Legal Administration, in December 1999.

The following year, Harm and his wife visited New York City for the first time. During a tour of Rockefeller Center, he learned that the sculptor of the Atlas statue on Fifth Avenue, and the Facade of 30 Rock were both done by Lee Lawrie. He knew that Lawrie had done some sculpture at the Nebraska State Capitol, back in Lincoln. And curiously, Radio City Music Hall has 3 large "roundels," sculpted and enameled disks of figures representing music, drama and dance. These were created by Hildreth Meieire, who also created a massive amount of mosaics design in the Nebraska Capitol's rotunda and great hall, but she also designed the stunning Guastavino Tile ceilings, in the Rotunda, the Great Hall and the original Senate Chamber. Her designs depicted life, Nebraska wildlife, and scenes of Native American Life.

What fascinated--and puzzled Harm--was that two artists with whom he was familiar, because of their work in Nebraska, it was news to him that they had significant works outside of Nebraska. The Nebraska works were the only examples of either artists work that he had learned about, despite living in Lincoln for 38 years, and having worked two internships at the Capitol during college.

This basic curiosity led him to begin an undertaking to learn as much about the architectural sulptor, Lee Lawrie, as he could. While Harm was not formally educated in art or art history, his master's degree had given him highly advanced research, field research and writing skills that he was able to apply to this task.

Initially, as he began researching Lawrie, he was stunned to find that Lawrie was conspicuously absent from most books on Sculpture, Art History, Art Deco, and American Art in the 1920s and 1930s. Consequently, Harm began what would become a series of research "expeditions" to libraries and historic archives across the nation, documenting Lawrie's work.

To date, his research and photography has taken him to New York City's public libraries, Columbia University's Avery Architecture Library, the National sculpture Society, Woodlawn Cemetery in the Bronx, the former Dime Savings Bank in Brooklyn, all of the Gothic Churches in Manhattan designed by Bertram Grosvenor Goodhue, The Rockefeller Center archives, the University of Pennsylvania's architecture library in Philadelphia, the Pennsylvania State Archives in Harrisburg, Gettysburg National Battlefield, the American Institute of Architecture's headquarters in Washington, D.C., The Library of Congress' John Adams Building, the Library of Congress Manuscripts Division, Washington National Cathedral, the Basilca of the Shrine of the Immaculate Conception at Catholic University in Washington, D.C., The Louisiana State Capitol and archives in Baton Rouge, Boys Town, the University of Nebraska's Love Library and Architecture Library, the Nebraska State Capitol Archives, the Nebraska History Museum and archives, the Los Angeles Public Library archives, Caltech's Campus and archives in Pasadena, and 600 California Street in San Francisco, where a pair of ornate elevator doors of Lawrie's were on display, from a state office building in Harrisburg, PA.

Through Harm's research, he was the first to publish the fact that the Nebraska State Capitol was Lawrie's largest commission in the world. Additionally, Harm has added more than 50 previously unidentified examples of Lawrie's work to the Smithsonian Institute's Catalog of American Paintings and Sculpture.

Harm did the bulk of the photography in this book, collected over the past two decades. Harm had been an amateur photographer since adolescence, or roughly 55 years. The book is richly illustrated with precisely 400 images. In this Fourth Edition of "Prairie Deco," Harm has expanded on previous versions of this book, with earlier editions being self-published in 2008 and 2011.

In June 2020, "Prairie Deco" earned one of six Finalist Medals from the NextGen IndieBookAwards, in the General Non-Fiction Category.

Harm is presently working on two additional books, one depicting and explaining the complex history and symbolism of Lawrie's sculpture at the Los Angeles Public Library, and a Herculean effort to fully identify Lawrie's Complete Sculptural Inventory; documenting and photographing and publishing it.

“...Written in easily understandable and flowing language, the text will especially appeal to historians and academics interested in art deco, architecture, Great Plains history, Native American culture, and the United States government, law, and politics. Stunning photographs of Lawrie’s designs and period images of the artist, many of them occupying full pages, make the book pop. Heavily illustrated (more than 50 photos in the first 50 pages, a balance that continues throughout the work), the volume will engage casual readers who may get bogged down in the long, scholarly passages. The book goes a step beyond most art histories, deftly bringing readers into Lawrie’s creative process and philosophy through his articles, speeches, letters, and never-completed autobiography.”
– Kirkus Reviews 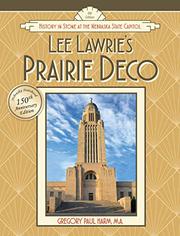 An art history book focuses on the man who shaped the prairie deco architectural style.

This fourth edition of Harm’s homage to Lee Lawrie, who sculpted the renowned Atlas statue at Rockefeller Center in Manhattan and others notable pieces, explores additional works by the artist. The book covers a lot of ground, opening with Lawrie’s ancestry and the significant events in his youth that led to his fascination with sculpture and his early development as an artist. He immigrated to the United States from Germany as a child and began studying sculpture at the age of 14, when Henry Richard Park, a “prominent Chicago sculptor,” hired him as an errand boy. Lawrie worked his way up, eventually getting assignments to create minor sculptures. The author, who has been researching Lawrie for 20 years, zeroes in on the artist’s works at the Nebraska State Capitol. Harm laments that the Capitol sits in relative obscurity despite ranking among the five most significant buildings of the art deco era. Lawrie and a collaborator “crafted the scheme of the building to be a sort of giant textbook.” The volume traces the development of the prairie deco style, inspired by Lawrie’s marriage of art deco and prairie architecture, which was intended to reflect and honor the Midwest’s environs and history. Chapter 17 concentrates entirely on the Sower, his statue that symbolizes the relationship between farmers and agriculture in Nebraska. It depicts a man casting seeds in hopes of growing crops to feed his family. Several of Lawrie’s other striking sculptures at the Capitol honor Native Americans, the state’s first settlers. Written in easily understandable and flowing language, the text will especially appeal to historians and academics interested in art deco, architecture, Great Plains history, Native American culture, and the United States government, law, and politics. Stunning photographs of Lawrie’s designs and period images of the artist, many of them occupying full pages, make the book pop. Heavily illustrated (more than 50 photos in the first 50 pages, a balance that continues throughout the work), the volume will engage casual readers who may get bogged down in the long, scholarly passages. The book goes a step beyond most art histories, deftly bringing readers into Lawrie’s creative process and philosophy through his articles, speeches, letters, and never-completed autobiography.

To further research, document, travel to and photograph all of Lawrie's work nationwide and in France.

20th Century German-American Architectural Sculptor Lee Lawrie's best known statue is the Atlas at Rockefeller Center, and yet very few people can actually identify him as its creator. Lawrie created sculpture on buildings nationwide, as well as monuments, medals and other statuary. His career spanned from the Gaslight Era into the Space Age; yet he never complied a comprehensive list of the works he created. This book is the first effort to locate, identify and document his work, and to pay homage to him as one of the nation's premier, but forgotten--or never known--20th Century American Artists.

The Los Angeles Central Public Library one of the finest examples of Art Deco Architecture in Los Angeles, and the building is richly adorned with architectural sculpture, depicting the great thinkers, and visionaries of the Western World as well as honoring those from the Eastern World. The building is rife with Greek & Latin inscriptions, verses and iconography honoring the concept of learning. In the 1980s controversial efforts to demolish the building gave rise to what would become the Los Angeles Conservancy, dedicated to historic architectural preservation.