Fire Captain Gregory Lee Renz was involved in a dramatic rescue of two little boys from their burning basement. He received a series of awards for this rescue, including induction into the Wisconsin Fire and Police Hall of Fame in 2006. When he was asked to share the dramatic rescue at several awards banquets, he was moved by the emotional responses he received and was struck by the power of his storytelling. Gregory has always been an avid reader and thought maybe he could craft a compelling novel if he could learn how to get these stories on the page. Ten years of creative writing courses, workshops, and conferences later, he typed The End to BENEATH THE FLAMES which was inspired by two adorable little girls, around eight and five years of age, who lived across from an inner-city firehouse he was stationed at for three years. Those two girls stayed in his thoughts over the years, demanding he tell their story. They are two of the main characters in the novel. He hopes he did them justice. After serving the citizens of Milwaukee for twenty-eight years as a firefighter, Gregory Lee Renz retired to Lake Mills, Wisconsin with his wife, Paula.

“Renz draws on his years of experience as a firefighter to bring a hardscrabble authenticity to his novel. He packs the tale with plenty of action and a lot of heart. His firefighting sequences are detailed and thrilling, placing readers right in front of the flames. His prose is clean and, at times, poetic..."—Kirkus Reviews”
– Kirkus Reviews 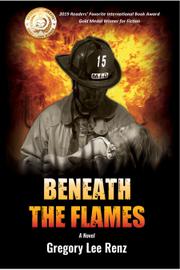 A debut novel chronicles the struggles of a troubled firefighter.

Renz’s story centers on Mitch Garner, a farmer and volunteer firefighter in a town called Milroy in Wisconsin. Mitch starts showing signs of PTSD when he is unable to save a girl in a fire. That is compounded when he accidentally starts a blaze that almost destroys the family farm, which he works with his brother, Chris, and his unforgiving father, Sid. To redeem himself, Mitch applies to become a professional firefighter in nearby Milwaukee. His father kicks him out of the house, and the move drives a wedge between Mitch and his girlfriend, Jennie McAdams. In Milwaukee, Mitch sees how racism affects the fire department and the gang-controlled, rotting neighborhoods around him. He finds an apartment with Miss Bernie, the mother of fellow recruit Jamal Jackson. Driven by his personal tragedies and the recent 9/11 attacks, and guided by the wisdom of Miss Bernie and his crew of veteran firefighters, Mitch becomes a hero while the family farm and his personal relationships suffer. The Mitch-as-savior storyline starts to feel a bit overdone by the novel’s third act. But then the author turns it around and shows how everyone the firefighter assisted, including two girls named Jasmine and Alexus Richardson, returns the favor and helps him find the redemption he has been seeking. Renz draws on his years of experience as a firefighter to bring a hardscrabble authenticity to his novel. He packs the tale with plenty of action and a lot of heart. His firefighting sequences are detailed and thrilling, placing readers right in front of the flames. His prose is clean and, at times, poetic: “The bright moon still owned the sky, but the birds were already chirping in anticipation of another sunrise.” Mitch and Miss Bernie are well-drawn characters, and a lot of the minor players are infused with great personality, aside from Jennie, who seems to exist only as a foil for Mitch’s emotions. She also provides some surprise help in a pivotal scene that comes off as ridiculous and almost spoils the ending.

For readers looking for a book with an uplifting story and breathtaking action, this is a worthy read.