Hank Whittemore is the author of one novel and more than a dozen nonfiction books on a range of topics. One book, The Super Cops, was a bestseller made into an MGM movie directed by Gordon Parks. Two other books are currently in film development. Hank is an Emmy Award-winning writer of many documentary films (such as The Body Human, CBS; The American Sportsman, ABC; and Without Borders, TBS) and approximately 100 cover stories for PARADE, the Sunday supplement. He is also a former professional actor and, more recently, he has performed a 90-minute one-man show "Shakespeare's Treason," based on his breakthrough work The Monument, offering a "macro solution" to the Sonnets. As a writer and scholar he has helped in the creation of the documentary Last Will & Testament, about the Shakespeare authorship question, in which he also appears. Hank has delivered many papers and talks on the subject of Shakespeare in both the U.S. and in the U.K. His current book, 100 Reasons Shake-speare was the Earl of Oxford, is the result of more than three years of work on Hank Whittemore's Shakespeare Blog. 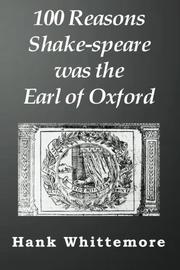 100 REASONS SHAKE-SPEARE WAS THE EARL OF OXFORD

A book offers an energetic defense of the Earl of Oxford theory regarding the authorship of the plays of William Shakespeare.

In this work about Edward de Vere, the 17th Earl of Oxford, the competing theories—proposing Francis Bacon, Christopher Marlowe, William Stanley, the Earl of Derby, and, of course,  Shakespeare himself—are given their day in court as well. (Indeed, examining and discarding these notions constitutes part of the quite literal 100 reasons presented in the volume.) As the alternative possibilities are explored, Whittemore (Feeling It, 2016, etc.) makes a progressively stronger case for the Earl of Oxford as the sole author of the works of Shakespeare. Beginning in the book’s introduction by questioning how such a seemingly unremarkable man as Shakespeare could demonstrate such near-miraculous genius, Whittemore takes the reader on an intricate journey in scholarship regarding the theater and the Renaissance period. He touches on the first Oxfordian supporter—John Thomas Looney—and builds profiles of the various players in Shakespeare’s world, from Queen Elizabeth I’s chief adviser, Lord Burghley, to her spymaster, Francis Walsingham. During this odyssey, an image of de Vere himself emerges: a brilliant, controversial man and an intimate of Elizabeth’s court with poetry and theater in his blood—an ideal alternative to Shakespeare for reasons ranging from creativity to insight into statecraft. While mainstream academia largely dismisses questions of authorship in studying the works of Shakespeare, Whittemore strongly champions the Oxfordian argument in this tour de force defense while remaining a highly entertaining writer. A breezy but very intelligent tone is maintained throughout the book; the reader is neither patronized nor boggled by minutiae and jargon. Instead, there is a magnetic sense of history, art, politics, and human nature injected into a smooth and eminently readable storytelling style. It is obvious that the author’s research has been painstaking, but the resulting document is more than painless—it’s downright pleasurable. The text itself is immaculate, as one would expect from such a seasoned nonfiction writer and scholar. One may or may not accept the Oxfordian argument, but Whittemore ensures that the reader will never again lightly dismiss it.

An engrossing and thoughtful literary examination. 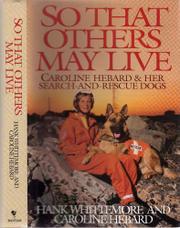 SO THAT OTHERS MAY LIVE

For over 20 years, Hebard has devoted much of her time to saving people's lives as part of a human-canine volunteer rescue team. This is her inspirational, often heartrending tale, cowritten with Whittemore (Find the Magician!, 1980, etc.). Hebard is one of the pioneers in this type of rescue work. Her earliest cases involve finding hikers and children lost in the woods, as well as missing elderly peopleall in the proximity of her suburban New Jersey home. Working with her personally trained German shepherdsshe's had several different faithful partners over the yearsher growing reputation eventually leads her to be called upon to find victims after various national and foreign disasters: earthquakes in Mexico City and Armenia, hurricane Hugo in South Carolina, and most recently, the bombing at the Oklahoma City federal building. Rescue missions are grueling and dangerous, often requiring that both human and canine partners climb over and through piles of rubble and debris in order to get inside collapsed buildings where survivors might be located. It is often grim work as well; more often than not, Hebard must mark the locations of dead bodies her team has found. Her return home from missions is often difficult psychologically, since she must quickly switch gears from rescue worker to wife and homemaker for her physicist husband and four children. Currently a co-leader of the US Disaster Team Canine Unit, Hebard is dedicated to improving the performance of canine search-and-rescue teams; between missions, she conducts symposiums in her field, emphasizing the importance of love and trust between human and canine partners. Compelling reading, but because of all the disaster-site details, not for the squeamish. (8 pages b&w photos, not seen)