Pursuit is Harry Taylor's second novel and it is a spin off from Rogues, Riches & Retribution. Thoughts on writing first occurred when Harry was a teenager studying in Manchester, England but it was to be many year later before pencil was put to paper. Harry hails from the lovely old market town of Nantwich in Cheshire but his career as a PE has taken him from the UK to numerous countries in the Middle East where the draw of Dubai has been the biggest pull on his life and that is where he now resides with his wife and family. Harry's career has also encompassed broadcasting on local radio in the UK, publishing articles in foreign press and a venture in the food and beverage industry where he was mine host of a popular diner on the outskirts of Sheffield and later he created and opened top end restaurants in Derbyshire and in the city of Gent in Belgium. 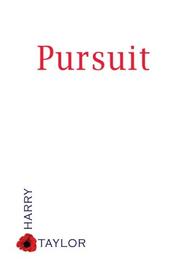 A legal thriller that pits the Mafia against a corrupt British legal system.

The second installment of Taylor’s (Rogues, Riches & Retribution, 2013) Mafia trilogy delves deep into the Pulvirenti family, a powerful presence in the world of organized crime. Tony, nephew of Massimo, the family’s feared Godfather, is sentenced to life in a British prison for the brutal murder of the Lawson family. Massimo charges his best lawyer, Angelo Bertesconi, with finding a way to free Tony and immediately sends him to England. A brilliant attorney who has yet to lose a case, Bertesconi is able to determine that Tony was convicted on the flimsiest circumstantial evidence: a murder weapon was never produced, and not a trace of blood was found on Tony’s clothing. Also, the murderer let the Lawson daughter live—a witness who could identify him in court. Bertesconi discovers that the chief inspector, detective inspector, and the judge are Freemasons, belonging to the same brotherhood as Lawson. Freemasons are an influential and notoriously corrupt organization in Italy, where Massimo largely directs his own affairs. However, the legal path to freeing Tony is a slow one fraught with obstacles: it takes Bertesconi an extraordinary amount of time to even procure the court transcripts, plus he has to learn an unfamiliar judicial system. Tony’s mother, dying and crippled with grief, pressures Massimo to expedite her son’s release by whatever means necessary. Massimo impatiently begins to plot an alternative plan that travels an extralegal path and courts great risk. In this dialogue-driven narrative, the plot unfolds largely through sharply written exchanges. Much of the suspense revolves around whether or not Massimo will choose to trust the British legal process or instead pursue criminal means to get his nephew out of prison. Even Tony—confident in Bertesconi and wary of life as a fugitive—is conflicted over the choice. While the story develops too slowly at first and often pushes the envelope of plausibility, the drama of that decision drives the whole book and makes for a worthwhile read.

An intriguing blend of legal thrills and Mafia matters.

As young boys Toni Virenti and his twin Italian brother witness the death of their father when hit by a car driven by a ruthless British lawyer. Family mafia elders decide to avenge the death and Toni is chosen to carry out the act when he reaches adulthood. During his quest Toni meets and falls for the adopted daughter of the lawyer. The daughters relationship with her father is strained after she discovers he has cut her out of his will and she vows revenge. During a business deal involving the lawyer, Virenti double deals a wealthy Arab businessman leaving him in belief that the lawyer was responsible. The Arab seeks revenge. Three people, one objective, will either succeed?
Published: June 11, 2013
ISBN: 978-1-4918-8503-1, 978-1-4918-8