Heidi Tawfik has had extensive exposure to Middle Eastern life and culture. She met her Egyptian husband while she was studying foreign languages and he was an exchange student at Vanderbilt University. She lived for five years in Egypt and Saudi Arabia which afforded her an insightful knowledge of the Arabs, their language, traditions and customs, and enabled her in this narrative to weave fiction with historical facts and events into a colorful tapestry. She spent over ten years researching and writing this historical fiction, her second published work.

In Cairo, Mrs. Tawfik studied Arabic and Egyptian history at the American University, taught English classes to Egyptian students at the American Cultural Center and published articles about her observations on life in the Middle East.

Employed by an international company in the Silicon Valley, Mrs. Tawfik was involved in international business development in the Middle East and Europe.

Mrs. Tawfik speaks and writes fluent German and has a good command of Spanish and French. She traveled extensively to Europe, the Middle East and South America and was an accomplished Flamenco dancer, piano player and oil painter.

The author is the mother of one son and grandmother to two grandchildren and has lived in Foster city, California for many years. 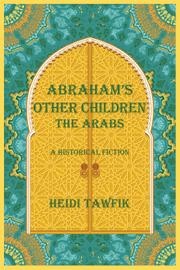 ABRAHAM'S OTHER CHILDREN: THE ARABS

Tawfik (Saudi Arabia: A Personal Experience, 1991) tells the story of the Arab people up to the time of Muhammad in this historical novel.

In 1800 BCE, in the city of Ur, Nahor—a member of a group of traders known as the Hebrews—hears that his son, Azar, has a new child, so he goes to visit him. Azar wants to name the baby Nahor, after his own father, but the elder man recommends a different name: “This boy should be called Abraham, a name that means ‘father of nations’. I have seen signs and believe he will be a great man.” As an adult, Abraham learns from the angel Gabriel about the true God, called “Al-ILah.” Gabriel also tells Abraham that his son Ismael must be taken to the city of Beca (later known as Mecca), where he’ll rebuild a house for God that was destroyed by the great flood. This house, the Kaaba, is the center of Arab worship for centuries. It’s not until a later prophet, Mohamed, comes along, though, that the original faith of Abraham and Ismael is restored. The novel is divided into three sections: the first deals with the founding of Mecca and the interactions between the Arabs and their Middle Eastern neighbors; the second chronicles the “Age of Ignorance” and further international relations; and the final section describes the rise of Mohamed. Tawfik’s prose is simple and largely unadorned: “Preparation to build Allah’s house and the sanctuary began in earnest. Abraham was a rich man and able to pay the cost of this large undertaking.” Overall, the book reads less like a novel than it does a historical summary with some light dramatization. As a result, much of the text is devoted to exposition, and people come and go quickly, not allowing much time for character development. Readers interested in Arab folk history will find Tawfik’s book a fairly concise synthesis of various sources and traditions. However, she doesn’t add enough elements or complicate the story enough to make it a truly compelling work of fiction.

A comprehensive but dramatically flat retelling of Arab history from a Muslim perspective.

This book reflects the views and impressions about the Kingdom of Saudi Arabia by an American woman who lived there during the mid-1980's. The author writes about her unique experience of observing the results of the technological modernization of Saudi Arabia.
Published: Aug. 15, 1991
ISBN: 978-0-9629455-0-2