H.J. Ramsay has loved fantasy ever since she was a child. Growing up, she was influenced by movies such as the Labyrinth, The Dark Crystal, and Legend as well as books and short stories, such as The Collected Works of Brothers Grimm. As such, she is drawn to fantasy with a darker side to its glittery world and the idea that things are never what they seem. She has an MFA from Antioch University, Los Angeles and teaches writing at her local community college. Ever Alice is her first published novel. 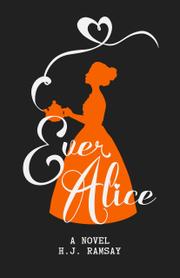 This YA fantasy debut sees Alice return to Wonderland to thwart the Queen of Hearts’ madness.

The year is 1888, and 15-year-old Alice Liddell is in the Warneford Asylum in Oxford. She’s been placed in Dr. Longfellow’s psychiatric care since nearly drowning in a river and returning from the magical realm of Wonderland. At school, Headmistress Collins had grown tired of her “childish nonsense” regarding the Cheshire Cat, the Caterpillar, and others. Yet Alice continues to keep her memories alive in a notebook filled with sketches that she hides below the floorboards of her room. One day, she finds the halls of the asylum replaced by those of her home. She wanders through the familiar, empty place and outside to the river. “You’re late,” says the White Rabbit, or Sir Ralph of Longshoot (as he’s truly known). He informs Alice that the Queen of Hearts has gone “stark raving mad” and beheaded the king. Further, Alice must return to—and save—Wonderland. After waking from what might have been a dream, Alice receives a visit from her mother. She learns that her sister, Mary, is getting married, and everyone hopes she’ll be healthy enough to attend the wedding. Arrangements proceed for Swiss Dr. Gottlieb Burckhardt to surgically cure Alice of her delusions once and for all. In this historically relevant fantasy, Ramsay honors Lewis Carroll’s work while expanding how readers connect with Wonderland. The humor lines up perfectly with the 19th-century source material, as when the Queen of Hearts asserts: “You must slouch. Everyone slouches in my presence.” Ramsay also offers excellent philosophical bons mots, including this White Rabbit gem: “You’re supposed to be wherever you belong.” An intriguing, though dark, surprise awaits in the character of Burckhardt, an actual pioneer of psychosurgery (for example, lobotomy) who began administering crude procedures in 1888. It’s bittersweet that in Wonderland, Alice meets the Prince of Hearts and his presence takes “away all the confusion and fear.” But she nevertheless comes to realize that “something was missing deep inside...that made Alice...Alice.” A harrowing finale closes this mostly playful narrative.

This trip to Wonderland delivers a mature, lasting jolt.