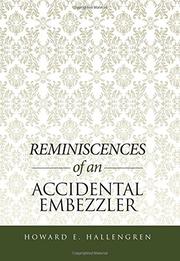 REMINISCENCES OF AN ACCIDENTAL EMBEZZLER

In this debut fictional memoir, a banker recounts his serial attempts at opportunistic fraud.

Both a U.S. and Swiss citizen, Kurt Wenner, working as an investment banker in Zurich in 1965, travels to South America on assignment. While there, he is tasked with transferring the money from a client’s account to his daughter’s. But the man dies before her account number is affixed to the proper form, leaving Wenner with an unexpected opportunity to seize the funds himself, something his wife, Ingrid, enthusiastically encourages him to do. But his theft is eventually discovered, and he flees to New York to avoid arrest, leaving his pregnant wife behind. Wenner gets work at several firms before landing a job at Morris, Brunner & Company, where he manages a European stock fund. Once again, he finds himself in trouble with his superiors after he dishonestly inflates the performance of his fund by diverting the money from unsettled trades into it, a possibility he learns by chance. He’s able to retain his position, though in a diminished state, and begins an affair with his assistant, Susan Maleska, and yet again stumbles on a way to illegally transfer money to an account he establishes in Grand Cayman. Wenner is caught again and convicted of embezzlement but manages to avoid jail time. He leaves New York, eventually ending up managing his own fund in California. But 12 years later, he brazenly returns to New York under the same name, wins a post at Second National Bank, and with the help of a colleague, embarks upon an even grander larceny. Hallengren cleverly builds the entire narrative from Wenner’s perspective, a brilliant and worldly man all but bereft of moral principle. The author subtly constructs a psychological profile of his protagonist—irresistibly drawn not only to illegal reward, but also the frisson of the risk itself. Amazingly, he returns to Zurich more than a decade after he fled the city to try to recover the money he embezzled, a recklessly gratuitous move. He makes a similarly imprudent decision to return to New York after years on the West Coast and to the banking industry under his real name, even calling his old flame, Susan, whom he once coldly abandoned. Since Hallengren allows Wenner to tell the tale—and he proves a fascinatingly unreliable narrator—these dangerous moves are deliciously downplayed as mere errors in strategy. Moreover, the author has Wenner depict himself as a victim of chance more than a scheming culprit, almost insanely unrepentant: “I never wanted to be a criminal. I never set out deliberately to steal anything. That money just seemed to fall from the sky in front of us, and all we did was pick it up.” One wishes Hallengren had furnished more information about Wenner’s early years—how did he become so amorally inclined? Nevertheless, this remains an impressive first novel, sharply written and devilishly conceived.

A remarkable portrait of a financial kleptomaniac.