Iain Hope was born in Lancashire in the UK in the early 1970's where he grew up and was educated. His interests in science fiction and fantasy grew from his awe and wonder of Star Wars, his delight in comic superheroes and his childhood research into history and mythology. He discovered his interest in reading novels while a young teenager after his grandmother gave him his first fantasy novel.

After several years voraciously reading every science fiction and fantasy novel he could get his hands on at the local library, second hand book shops and market stalls, he determined he would write... only to discover that earning a living was more pressing.

Many years later, after university, working in construction and then settling on a career as a teacher, he finally set out to write. Dark Horde Rising is his first novel set in the world of Primus and is the first part of the Covenant Stones Epic...

“...a complex story that is as imaginative as it is expansive...”
– Kirkus Reviews 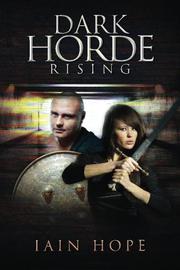 From debut author Hope comes an epic fantasy novel about a group of friends, a college of magic, and a time of great disorder.

As Jon Madraig rides his war-ready stallion through the streets of the city of Lauria, he is clearly not a local. With his blue eyes and pale complexion, Jon is “a descendant of a strong house of warriors from the highlands of Calon.” Viewed with suspicion, Jon’s ultimate destination is the esteemed College of Magic in the city of Shandrilos. A truly spectacular place, Jon reflects that “nowhere else had magic users come together to share their knowledge in such a way, and definitely nowhere else had conflicting priesthoods; the Nordic Druids and the Alban Monks been brought together!” Jon meets with old friend Darin, and the two head to the college for the Grand Council of the Wildlands. Darin, a skilled swordsman and knight of the order of Saint Karodra, is just one of Jon’s many talented friends expected to arrive at the school. A commotion in the catacombs beneath Shandrilos requires an investigation, and Jon and his cohorts are tapped for an adventure on which they’ll encounter goblins, elves, enchanters, sorcerers, and other magical beings. Overflowing with characters like Val’Ant Greycloak (an elf lord of the wild) and Elgon the Golden (a Nordic warrior mage), the story if full of dense fantasy. Descriptions can be superfluous, such as the information that a sabre-staff is “a weapon virtually unknown to humans save for perhaps weapons experts” and is much “like a short staff about three feet long with a long slightly curved blade on the end.” Readers comfortable juggling such fare on a massive scale are likely to uncover a complex story that is as imaginative as it is expansive. Ultimately much stranger than the standard hack-and-slash caper, the reader can never be quite sure what spell or creature or unexpected visitation lies just around the corner.

Long on imagination and word count; not for the casual fan of fantasy.

Now I am become death, the destroyer of worlds.

Breadth of knowledge of historical facts