Ilchi Lee is a dedicated advocate for a peaceful, sustainable world, a bestselling author, and an innovative leader in human brain potential development. A true believer in the power of each person to change themselves and the world around them, Ilchi Lee has developed many mind-body training methods, including Body & Brain Yoga and Brain Education, and has helped millions of people globally find their true potential and develop it for the benefit of all. He has penned over 40 books including the New York Times bestseller The Call of Sedona: Journey of the Heart. He currently serves as President of the International Brain Education Association. 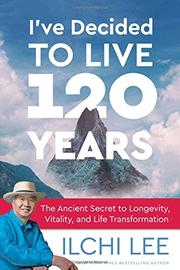 Lee’s (Chance, 2017, etc.) newest entry in his Body & Brain series discusses the benefits of devoting what he calls the “second half” of life (from age 60 to 120) to the betterment of the Earth and mankind.

Korean-born Lee has spent most of his life studying and teaching self-actualization, and his Body & Brain Yoga and Brain Education seminars have taken him around the world. His teachings, he says, are based on “Sundo, a traditional Korean system of mind-body training.” Now in his late 60s, Lee says that he has found a new purpose: he suggests that one can “decide” to live to be 100, or even 120. With this mindset, he asserts, one can face later stages of life with enthusiasm for how much can still be accomplished rather than with fear of old age: “the second half of life, more than any other time, is optimal for finding and realizing that [true] self.” His current project is Earth Village, a retreat that he founded in a region of the North Island of New Zealand. He describes it as “a residential school and community...where hundreds of people can experience a self-reliant, earth-friendly lifestyle in a place where humans and nature live in harmony.” In articulate, well-organized prose, Lee ebulliently shares his methods for overcoming life’s stumbling blocks, be they external or emotional. For example, here’s how he describes a meditation exercise to release the soul from weighty baggage that’s been collecting over the years: “Feel the ardent desire to become a free soul, and feel only that desire. Feel the earnest desire in your heart to soar freely in the heavens, like a bird.” His lifestyle and training methods for maintaining a healthy brain as one ages effectively focus on a critical element: hope, which he calls “Vitamin H.”

A joyful book that will appeal most to self-help enthusiasts, but some tips may resonate with a broader audience.