Ivan Obolensky grew up regaled by tales of his ancestors while surrounded by high society. Those stories of intrigue and adventure inspired him and nurtured his love of storytelling, which he brings to his writing, both fiction and nonfiction. "Eye of the Moon" is colored by the stories of his youth. It was inspired by two questions: If life has given us gifts, what do we owe for having squandered them? To whom do we owe exactly and what will that payment be? Set in a family estate at Rhinebeck, the plot is a complex and sophisticated web of mystery, Egyptian occultism, sumptuous elegance, and intrigue. Ivan is a lifelong reader and seeker of the way worlds intersect and connect. His nonfiction articles, weaving history, current events, science and finance, are published online. Ivan lives in Southern California with his wife, Mary Jo. His hobbies include running, photography, and music.

“Obolensky conjures a remarkably imaginative tale, seamlessly juxtaposing the quotidian and the magical in a way that renders the latter mesmerizingly plausible.”
– Kirkus Reviews 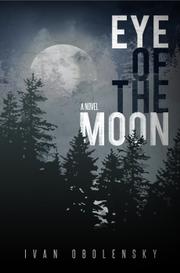 EYE OF THE MOON

In this debut murder mystery, a pair of friends searches for clues in the darkest recesses of the occult.

Johnny and Percy grew up as close as brothers. So when Johnny asks Percy to accompany him to his family’s luxurious estate in Rhinebeck, New York, he agrees despite some reservations. While rummaging about in the cellar, they stumble upon some personal effects that belonged to Johnny’s deceased aunt, Alice, a larger-than-life figure who died under mysterious circumstances. In response to their curiosity, Stanley, the family’s butler and once Alice’s confidant, enigmatically offers them a contract of sorts: he’ll give them Alice’s diary and tell them everything he knows about her life in exchange for a future favor left currently undetermined. In the spirit of adventure, they both accept, and Stanley regales them with a lurid tale of Alice’s fraught marriage to Lord Bromley, a sinister man rumored to have dabbled in the supernatural. He is an abusive husband—his malignancy is memorably described by Obolensky—and Alice finally conspires to escape marriage to him. The cost of her victory, she believes, is a terrible curse delivered to her by Bromley. She devotes the remainder of her days searching for a reprieve from her dark punishment, indefatigably perusing ancient artifacts and books to that purpose. Johnny and Percy want to discover if her death was the result of murder and follow her lead in summoning demons to divine the truth. Meanwhile, Percy becomes infatuated with Brunhilde von Hofmanstal, the beautiful daughter of a baron and his wife, all visiting Rhinebeck. Though his feelings for her are powerful, he also suspects her interest in him is fueled more by ulterior than romantic motives. Obolensky conjures a remarkably imaginative tale, seamlessly juxtaposing the quotidian and the magical in a way that renders the latter mesmerizingly plausible. Johnny and Percy’s headlong march into the occult world that may have destroyed Alice is shockingly inadvisable and yet seems to make sense all the same. In addition, the author has a morbid gift for the description of human turpitude that simultaneously inspires both revulsion and awe. But his writing, in particular the dialogue, is oddly genteel and strikes a decorous tone that is more suitable to the 1870s than the 1970s, the actual setting of the story. Exchanges between characters include phrases like “pray tell” and “indeedy,” which seem like the author’s approximations of the communicative ticks of the well-heeled. Nevertheless, Alice’s complex character powerfully emerges as the plot’s tonal center, a bewitching amalgam of moral strength, intellectual vitality, and a lust for life. Likewise, Stanley is far more than meets the eye, and Obolensky skillfully portrays him with literary restraint, leaving the reader to deliciously wonder if he’s truly a friend or a secret foe. The principal failing of the novel is its sprawling length (more than 500 pages). The plot unfurls at a sleepy pace, and the author promiscuously inserts narrative detours. Still, the story as a whole remains a transfixing one, ingeniously constructed.

Despite its length, an engrossing tale of mystery and magic.

Eye of the Moon

And so it goes.

Coming up with advertising phrases.

Finalist "Paranormal" in the Next Generation Indie Book Awards