JD Allison was born in a hospital, to a pregnant mother and fertile father, and has spent the last thirty-some odd years living largely inside JD’s own head.

Earning a living as a computer programmer, JD has also worked as a professional clown, art model, Gap pissant and server at a notorious restaurant known widely for their “Flaming Sausage” house specialty. (It sounds more exotic in Portuguese) JD hopes to add “thriving novelist” to the résumé, and spends free time trying to bake flawless rye bread, exfoliating, perfecting the groovy dance and boning up on becoming a ninja assassin.

JD owns no children, but is parent to one viciously unstable cat. 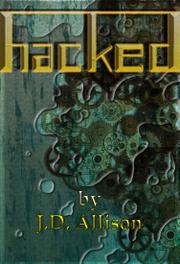 In a realm of virtual reality, “subscribers” hone in on the lives of others.

Allison’s debut novel unfolds intricately, inundated with slang and jargon yet very little context—readers unfamiliar with cyber terminology may need to brush up on the language. Tenyen (just a handle, not his name) is in a virtual world with his love, Nether, but on his way home, he’s hit by a truck. He doesn’t die, though; instead, he’s downloaded to a “Shell”—an avatar of sorts—and taken to the Plant for repair. His trek leads him to a “dwarf” named Migaroy, who enlists Tenyen’s help in stopping a “twitcher,” which can turn people into a zombielike state. Nether, meanwhile, is searching for Tenyen and somehow infecting people just like the twitcher; masses of stumbling, empty and gray bodies lie in her wake. The story’s unreliable narrators (Tenyen, Nether, et al.) make the story sometimes hard to follow: Tenyen begins in a Mediapod (a “private room”), heads home but is still virtually connected to Nether; then he wakes up somewhere else after the truck accident. He and Nether are often besieged by memories and dreams, so most, if not all, of the story seems unreal. The focus is initially on Tenyen, but once the perspective shifts to Nether, the author sharpens the story. It’s almost a reboot, re-examining events that have happened to Tenyen, like when he was attacked by giant crabs with a fondness for gears. Other characters, including Migaroy and the twitcher, take the narrative reins to further illuminate the world, explaining, for instance, some of the players’ origins. The author’s prose can be poetic, which lends the story the air of a modern epic poem. Chandler-esque analogies (“You make love like razor blades”) and animated descriptions (“The blood drip, drip, drops on the floor”) also brighten the prose. A few recurring images in the novel, including panda bears and a toy monkey that speaks to Nether, are amusingly outlandish, although they are given deeper meaning as the plot progresses to its satisfying conclusion.