A.J. Knauss practices emergency medicine under a slightly different name. From now until the end of her current army deployment she will donate all proceeds from ROOM FOUR sales to Operation All the Way Home, a charity set up by Lancaster High students to help a wounded Iraq vet. SGT Hancock was paralyzed and lost an arm; they are fundraising for an accessible house for him and hope to help others in the future with extreme rehab/mobility needs. Acute trauma care is something but the long road after is everything. Consider a donation to www.operationallthewayhome.com
This is her first novel. She is working on the second during deployment downtime. It may also have something to say about the medical system.

“Witty and engaging, this short novel will provide readers a dose of hilarity and a quick cure for the workaday blues.”
– Kirkus Reviews 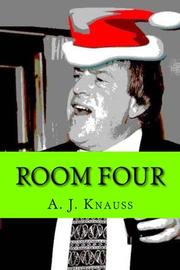 The laugh-out-loud tale of how a hapless accountant endures a three-day coma in the company of another soul in limbo, observing the gritty, often bizarre goings-on of an inner-city emergency room.

It’s just after Christmas, and Alan Fries is confused: Why are nurses wearing antlers hovering over him, and why, instead of watching the Bears–Vikings game, is he hanging out in the ER with an 87-year-old crank named Jerry? Apparently in limbo while awaiting resuscitation or a signed death certificate, the oddball pair become dead flies on the walls in St. Augustine’s—aka Holy Tino’s—an aging Chicago hospital with grave financial issues and a staff of embattled but good-hearted nurses and doctors. This cast of characters could top the Nielsen ratings in a TV sitcom: the doctor who leaves his sperm sample in the fridge, the veteran nurse putting the kibosh on an intern’s crush and the ever-plentiful nutcases who file through the ER’s sliding doors. The flirtations, the combative patients and the increasing suspicions about the hospital CEO all come peppered with Jerry’s curmudgeon commentary and Alan’s naïve curiosity regarding such ephemera as why he can’t activate the paper towel dispenser and whether he should have a bucket or an “unbucket” list. Author Knauss, who practices emergency medicine when not penning novels, structures the narrative on a framework of expertise that gives the story both legitimacy and depth. He also wisely weaves in strands of seriocomic contemplation as Alan regularly ponders his life choices and his treatment of his wife, Laura. He misses her, although strangely, he doesn’t spend time in Room 4, where she waits anxiously with his best friend. Nor does he seem interested in the progress of his tube-ridden, comatose body. But such questions aside, Alan's and Jerry’s repartee and observations are a gas to read, and the subplot that arises about halfway through adds to the sense of purpose that Alan felt was previously lacking in his life. He even plans for the future—provided he recovers.

Witty and engaging, this short novel will provide readers a dose of hilarity and a quick cure for the workaday blues.

Falling more than anyone else while learning to surf but relocating my own dislocated toe in the process.

Exploring. Every day is a bonus.