J. L. F. Lambert was educated in Europe and North America. He established and directed the Terminology Unit of the Royal Canadian Mounted Police from 1975 to 1999, and he had the first English-French police dictionary posted on the Internet. He has served with the Department of Justice as a sworn translator in Ontario, and as an interpreter in Italy. His linguistic services were called upon by the Kent Constabulary for the Channel Tunnel operations, by the Cyprus Association of Translators, and by the hotel school of Santa Lucia, Cuba. He has taught terminology science at the University of Ottawa, and French at Collège de Jonquière in Gatineau, Quebec. He is the author of a glossary on plate tectonics, of an illustrated fingerprinting vocabulary, of a history of terminology science in antiquity (Termcraft, five stars from Clarion, 2014), and of unpublished short stories (incl. Sur les traces d’Hannibal, Special Jury Prize, Italian Week, Ottawa, 2007). 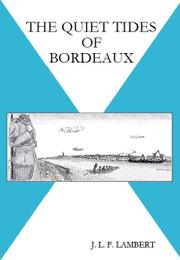 The Quiet Tides of Bordeaux

Lambert (Termcraft, 2014) records the life a 20th-century schoolteacher in Bordeaux.

At the end of this biography of Madame Hébert, formerly Micheline Ponthier, Lambert writes that the nonagenarian felt gratified that someone had finally put her life down on paper. “The past was not hers anymore now that it existed in a written form, and it would be up to the reader, especially the younger generation, to draw a lesson from it.” The lesson is embedded in the history of a woman, born in 1916 France, who worked as a teacher when the Germans invaded in 1940. Against the backdrop of World War II, the young Catholic Micheline entered into a forbidden love affair with a young Protestant doctor. The relationship was doomed. After the war, Hébert became the director of a training center for women and married a widower with children. Decades later, after her husband, too, had died, Hébert worked with the author to attempt to quiet the competing forces of her recollection and set her memories in order, putting to rest the dead and finding redemption for the living. The book is an unorthodox biography. The names used to describe the characters appear to be pseudonyms (the book is dedicated to a “Madame H***”). The work is as much about the creation of biography as it is about Hébert herself. Lambert exists as a gentle presence at the margins, the receiver of Hébert’s musings and memories. We learn of a previous attempt at setting things down: “Madame Hébert had decided to hire a ‘ghostwriter,’ but the final product failed to satisfy her: one hundred and one pages for a life, her life, filled with emptiness and clichés.” Included along with her sometimes stream-of-consciousness thoughts are many letters, photographs, and drawings of various sites in Bordeaux. The mixed media, along with the blurred line between biography and literary novel, brings to mind the writings of W.G. Sebald. The fractured nature of the narrative, dotted with artifacts of the past, provides a compelling method for telling the story of a life marred by war and loss.

A hushed but resonant literary memoir.

TERMCRAFT: The emergence of terminology science from the Vincans and Sumerians to Aristotle

Termcraft is a world-heritage story. It chronicles the origins of naming, writing, and reasoning through the prisms of terminology science and linguistics. Revolving around Greek philosophy, early mythology, and primitive pottery and rock marking, it reveals how the Term became the keystone of scientific research, knowledge transfer, and economic development. Speech and writing are posited as referential systems used to control space and time, thereby ensuring survival. Ice Age symbols inaugurate 'signs for special purposes', and Balkan Vin?an logograms and later Sumerian and Egyptian pictograms point to Languages for Special Purposes, with determinatives marking technical concepts. The doctrines of ideas, naming, and being are scrutinized; their interaction with cosmic order and individuation through boundaries is illustrated with a deified ‘Creating Word’ from Mesopotamia, Egypt, and The Levant. The logic of the Word's role in self-defining and reasoning, both analogous and prognosticative, is analyzed. A perception-processing tool, the Logos, is identified in the first definition of ‘definition’ and ‘term’, and in syllogistic substitutions; when used together with Aristotelian categories of thought, they clarify language and discourse. What emerges is a fool-proof, thought-testing matrix based on a new systemic Word, the Term—the paradigm of today’s information bytes.
Published: June 20, 2014
ISBN: 978-1-4602-1665-1