Jack Tucker was born in New York State in the mid-1950s. He joined the Foreign Service in 1980 and served as a reporting officer at US Embassies and Consulates in El Salvador, the Dominican Republic, Australia, Azerbaijan, Uzbekistan, and Saudi Arabia, as well as at main State in Washington, DC. In 1988-89 he served in the Multinational Force & Observers in the Sinai Desert. Together with Ursula Eberhard he wrote a guidebook to the Dominican Republic in1991. Jack served as a civilian economic advisor with the US Army in Afghanistan in 2008-2009. Later he reinvented himself as a USAID-contractor in Iraq in 2009-2010. He accepted temporary assignments with the State Department in Iraq and Saudi Arabia in 2013-2014. He traveled extensively in Turkey and written two guidebooks complete with detailed site descriptions with GPS coordinates for ancient sites in Asia Minor (ISBNs 9781482392173 and 9781478343585), one of which Svetlana Kopitilana translated into Russian (ISBN 9781517283209). More recently in 2014-2015 Jack served in Ukraine with the Organization for Security and Cooperation in Europe (OSCE). He is married, has two adult children, and currently lives in Maryland.

“These tales about life abroad offer colorful descriptions of faraway lands as seen through the lens of an American diplomat. But the author, ever the careful observer, proves to be most interested in the fascinating characters he met in these locales. In taut prose, he describes his colleagues, their inner worlds, their torments, and their domestic strife to reveal the layered complexity of their lives. In each far-flung post, he encountered people who intrigued him, including women whose self-contradictions and persuasive magnetism exercised a magical yet dangerous allure.”
– Kirkus Reviews 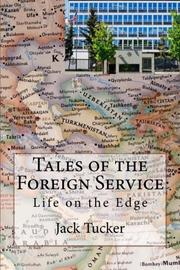 Tales of the Foreign Service

These tales about life abroad offer colorful descriptions of faraway lands as seen through the lens of an American diplomat. But the author, ever the careful observer, proves to be most interested in the fascinating characters he met in these locales. In taut prose, he describes his colleagues, their inner worlds, their torments, and their domestic strife to reveal the layered complexity of their lives. In each far-flung post, he encountered people who intrigued him, including women whose self-contradictions and persuasive magnetism exercised a magical yet dangerous allure. In El Salvador, for example, he encountered the decisive and talkative Rosa Marina Baxter, the wife of a hapless expatriate American and a sharp poker player: “Her large, pale blue eyes were a little tired; her face was slightly lined but finely featured; her mouth smiled easily and often made a pout-like expression that suggested a sense of tolerant irony.” Whether he was in Central America, Australia, the Caucasus, or stateside in Washington, D.C., Tucker often found himself trying to sort out the relationships and motivations of women. However, the author reveals little in this book about his own relationships with them, although he does write of his attempt to attract a blonde at North Camp, a Middle Eastern post that was otherwise dominated by men. But instead of wooing her, he engaged her and another male colleague in an all-night card game. Sadly, some textual errors mar these tales: triple-quote marks litter the text and copy editing issues (“alright” for “all right”; “lay” for “lie”) also detract.

A finely wrought compilation, despite its occasional flaws. 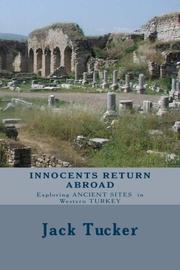 Tucker’s guide and Mark Twain’s classic travelogue The Innocents Abroad share few similarities apart from their titles, although both books aim to help American audiences better understand the Mediterranean region. In fact, this guide takes on a somewhat more complex topic than Twain’s, presenting a treasure trove of information on ancient sites in western Turkey. The book explores several famous regions of the ancient world, with particular emphasis on Ionia, Caria, Lycia and the former area of Constantinople (now Istanbul). The author stuffs each entry with data, including GPS coordinates, copious black-and-white location photos, literary quotations, websites for further information, and more. Tucker not only tells readers where to find each site, but also puts each location in historical and cultural context. The author delves expertly into Greek, Roman, Egyptian and biblical chronicles to vividly illustrate the historical and mythological significance of each site, and it becomes clear why archaeologists, antiquarians and knowledgeable tourists continue to come to these places thousands of years later. For example, the entry on the ancient region of Troad explores the familiar legends of the Trojan War (the Iliad and the Odyssey) and the spectacular history of Alexander the Great, giving them an exciting immediacy. A chapter on Ionia evocatively addresses several famous locations in biblical scholarship and Roman history, including the city of Ephesus. For writers and armchair historians, the book helps clarify details of ancient times and places. However, the book occasionally uses awkward layouts and typography, and its visuals at times resemble PowerPoint presentations. That said, while the book may not be sleek and stylish, it has what it needs under the hood, as its fact-rich entries are clearly and crisply written.

An invaluable one-volume travel encyclopedia that will pique even casual readers’ curiosity.