Jaimie Engle is a full-time writer of middle grade and young adult books. Her realistic fiction questions reality with everyday kids who become heroes, including Metal Mouth: Lightning Can Strike Twice. METAL MOUTH was named a Kirkus Reviews’ Editor's Choice in 2020 (starred review) as well as a contendor for multiple school lists, to include the Florida Sunshine State Reading List for 2020-2021. Jaimie is a popular speaker at schools and conferences. When she’s not writing books or screenplays, Jaimie is distracted by the many funny videos of TikTok, cosplaying her favorite characters at comic conventions, and giving back by helping young authors. She lives in Melbourne, Florida with her husband, one of their two boys, a Star Wars hounddog, and entirely too much sunshine.

“A tale presents troubled adolescence and romance through the eyes of a remarkable teen protagonist.”
– Kirkus Reviews 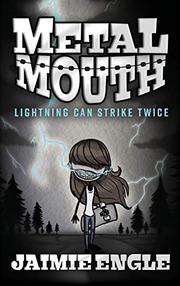 A high schooler struck by lightning suddenly begins hearing—and conversing with—a boy’s voice inside her head in this YA fantasy.

Fifteen-year-old Floridian Mahlorie Moore is often alone, not always by choice. Her mom, Victoria M. Reddish, a famous author of romance novels, is typically away for book signings. Her magician dad, Bob, is usually performing on cruise ships. Though socializing is low on Mahlorie’s list, she reluctantly heads to a party one weekend that her best friend, Shai Dwenger, suggests. But after an intoxicated boy’s unwanted advances, Mahlorie leaves in the midst of a raging storm. She’s hit by lightning, which she miraculously survives. Only now she hears a male voice in her head, and it’s quickly apparent he can hear her, too. It takes some getting used to, but the boy is considerate and sometimes helpful, as when he provides the solution to a math problem in Mahlorie’s class. She learns she’s speaking with 17-year-old Dyson Hertz, who becomes a friendly voice and, eventually, something much more. When his voice evidently disappears, Mahlorie wonders if he’s simply no longer talking to her. So she searches for him to get answers and maybe see the boy she loves in the flesh. Mahlorie, who narrates her story, is a bright but convincingly flawed protagonist. For example, she seemingly has a fear of abandonment while simultaneously isolating herself. But she tends to be frank, and if a boy invades her personal space, she doesn’t hesitate to let him know. Engle’s first-rate cast of characters includes sometimes-selfish but consistently loyal Shai and Mahlorie’s creepy older cousin, Philip. Her parents are likewise memorable, although their jobs are excessively conspicuous metaphors (for instance, Victoria will “plot” Mahlorie like one of her characters; control in life is merely an illusion). Nevertheless, the author recounts familiar situations in lyrical fashion, from an awkward silence (“Quiet roars between us”) to a trek in the dark woods (“Night stretches through the crunch of leaves and sticks that snap beneath my feet”).

A tale presents troubled adolescence and romance through the eyes of a remarkable teen protagonist. 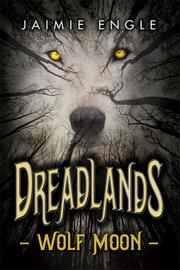 Arud Bergson lives near the woods with his mother, grandmother, and little sister. His father is a week late returning from a two-day trading trip, but Arud can’t go search for him because the shape-shifting, wolfish “ferine” in the nearby woods threaten his family. Instead, he and his sister, Lykke, must travel alone to Vithalia City and get the protection of their uncle. On the way, they encounter dangers, including a drop down a waterfall and possibly dangerous allies. For better or worse, the enigmatic, beautiful Scalvia agrees to be their guide, and from her family, Arud learns of a mysterious prophecy which may have far-reaching impact, not only for Arud, Lykke, and their journey, but also for all the residents of the lands around them; specifically, the fates of two species could be in their hands. Moreover, many will hunt Arud and Lykke, in order to use them in the oncoming conflict. If they’re lucky, they’ll evade capture until they can make it safely to their uncle; if not, the whole world could be devoured. This would be an unfortunate outcome, as the world Engle has created in this novel is an intriguing one, equal parts familiar and fantastic. One notable example is the thematic link between the wolflike ferine and the Viking gods that the characters revere. Unfortunately, the pagan piety comes across more as window dressing than as something important or significant to the characters. Otherwise, though, the characters have great emotional truth and are sure to appeal to younger readers; in particular, the relationship between Arud and Lykke, is notably satisfying. The journey on which they embark may be a fairly standard epic-fantasy jaunt, but it’s entertaining as the action progresses smoothly, if occasionally predictably, along a standard “chosen one” plotline.

A solid, journeyman effort that shows signs of trying to break free of epic-fantasy tropes but never truly flies.

Manager of Magic and Mayhem

“Because never in my entire childhood did I feel like a child. I felt like a person all along?the same person that I am today.” --Ender's Game

To inspire others and serve.

I can rhyme on command...perfectly.

Logline: Nine kids trapped in an alternate dimension discover they are hunted by Ancient beings in a time loop they can’t break. 16-year old TEMBER ASCHE moves in with estranged aunt, ABIGAIL CROFT, after his parents are pronounced dead in a Middle Eastern archaeological dig gone awry. They were secretly searching for a relic to close the gate to Woodbridge, a town run by seven MASKIM DEMONS and an ancient Sumerian god called ENKI. This town is hidden at the center of Boca Key, Florida, where Tember is now forced to call home. He hates it on the Key, especially after he hallucinates evil spirits and Abigail falls into demonic trances. Or is it all real? MALIN ROSE, the beautiful girl he meets on the beach is the only good thing that’s happened since his parent’s death, and he just might be falling in love with her. But a video of his parent’s last moments leaves Tember convinced they are still alive and a roll of film from his camera that’s suddenly used up by someone else leads him into Woodbridge for answers from THE DEVELOPER. He is apparently the only person on the island who can help Tember, after the whole town goes on lockdown from several teens disappearing.

A female teen drag racer in a not so distant future refuses to embrace technology until nanobots connected to her car become the only thing keeping her alive.

Logline: Haunted by four-legged ghosts in St. Augustine, a 12-year-old must help vengeful shadow-pets find rest or watch them pick off his family one-by-one. Colten never wanted to leave Satellite Beach. His dad, a now retired Air Force Captain and his mom, a homemaker, couldn’t wait to open a bed and breakfast in St. Augustine, in a gorgeous Victorian that once belonged to a world-renowned veterinarian. Only, Colten sees things, hears things, and his sister almost dies—twice. Animal ghosts are reaching out from the other side with hints that the doctor may have been hiding things behind the Victorian's closed doors, leaving Colten with two choices: help them or watch his whole family die.

A family haunted through tech learn that their secrets just might kill them.