Jake Blake's novel "Shakespeare On Ice" imagines an actor from 17th century London who is frozen and revived in 21st century London. This historical fan-fiction playfully references numerous plays by William Shakespeare, including histories like "Henry VIII," tragedies like "Hamlet," and comedies like "Twelfth Night."
Blake published his first dystopian adventure novel "Sunburned: The Solar Flare that Silenced the Internet" in 2012 and its sequel "This Too Shall Collapse" in 2017. Resourceful and well-connected people step up to restore critical systems after a coronal mass ejection disables all modern technology in this globe-trotting series.
Mr. Blake has a Master of Arts degree from Washington State University. He is currently adapting "Shakespeare On Ice" into a forthcoming play.

“Blake’s love of Shakespeare is apparent on every page of this book, and fans of the Bard of Avon will surely recognize numerous clever allusions to the plays; when Jon is unconscious in the hospital, for instance, his nickname among the staff is “Ophelia,” as he was found dressed as a woman while floating in the water.”
– Kirkus Reviews 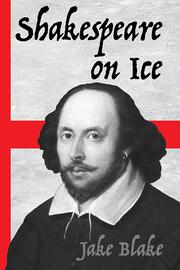 In Blake’s time-skipping novel, a Shakespearean actor from the past ends up at the modern Globe Theatre.

In 1613 London, Jon Henry has set the theatrical world alight with his convincing performance of Anne Boleyn in his friend William Shakespeare’s latest play. Unfortunately, the Globe Theatre is literally set alight during a performance, and the entire building burns to the ground. Still wearing his Anne Boleyn dress—his street clothes were destroyed by the flames—Jon joins some of the other King’s Men for a drink. After imbibing some strange potables, Jon drunkenly ends up in the Thames, where he climbs into a floating barrel of freezing brine and sinks to the bottom of the river. He spends four centuries entombed in the concrete foundation of a quay until he’s dislodged by a dredger. The actor, who’s been cryogenically preserved,floats to the surface and awakens in a nearby hospital, confused. He soon realizes that he’s in the 21st century: “Will was gone….everyone Jon had ever known were dead and had been dead for so long, not even their bones remained.” At a loss, he hits the London streets, searching for something familiar. Luckily, he soon meets Emma Morgan, a performer at the modern Globe Theatre, and she has a generous heart. It turns out the Globe is about to begin production on Henry VIII—a play that Jon knows very well, though by its alternate name, All Is True.Can Jon fit in among modern people who would never believe him if he told them his true story? And is Emma, a fine actor herself, hiding secrets of her own?

Blake’s love of Shakespeare is apparent on every page of this book, and fans of the Bard of Avon will surely recognize numerous clever allusions to the plays; when Jon is unconscious in the hospital, for instance, his nickname among the staff is “Ophelia,” as he was found dressed as a woman while floating in the water. However, Blake’s tendency to cater to Shakespeare fandom often has the effect of taking the reader out of the story, as when the novel clumsily introduces the playwright into the narrative: “ ‘William Shakespeare at your service,’ he said with a swooping bow that revealed his balding pate.” Later, when Jon tells Shakespeare that his plays will be read for centuries, the man responds in a manner that shows far too much foresight: “For everything there is a season. The English language is growing, vowel sounds are changing, and some day people will not understand my rhymes and puns.” The modern-day material is a bit more fun: Emma has just played Viola and Cesario in Twelfth Night, and she and Jon both make use of disguise during the story. Unfortunately, the novel never really escapes the Shakespearean framework to find its own reason for being. Bardolators will enjoy keeping track of all of the references, but these won’t likely be enough to sustain the interest of general readers.

A neatly executed but somewhat thin tale that revolves around classic plays.

Sunburned: The Solar Flare that Silenced the Internet

Earth has less than 14 hours before a solar superstorm disrupts all modern technology, resets the Internet and forces highly connected people to adapt to a new world without electricity. Travel in style with the rich and famous from their luxurious Manhattan penthouse to the pink sand beaches of Bermuda, race through the streets of London with a flash mob at your heels, float above the Earth in a powerless spacecraft with limited oxygen and no heat, fight a power plant meltdown single-handedly and climb the stairway to heaven during judgment day. This stylish, modern adventure features a rich cast of intelligent, well-connected characters who are suddenly isolated and compelled to react to local and global changes. Author Jake Blake will have you wondering if technology is a blessing or a curse as characters cope with one crisis after the next and experience the worst electromagnetic storm to hit Earth in 150 years.
Published: July 12, 2012
ISBN: 978-0985808129

This Too Shall Collapse

After a solar flare and magnetic storm renders modern technology useless, brave men and women must learn to work together to navigate this changing world and fix the things that were broken. In this sequel to his debut novel “Sunburned: The Solar Flare that Silenced the Internet,” author Jake Blake takes readers on a globe-trotting journey that is thrilling, sexy, provocative, spiritual and philosophical.
Published: June 8, 2017
ISBN: 978-0985808174