As an attorney and former judge, James J. Kaufman has published several works of non-fiction. In The Collectibles, his debut novel, Kaufman draws heavily from his experiences in law, the world of business, and interactions with people from widely different backgrounds. Mr. Kaufman has been active in many national and international corporations, including CEO of Riviera Marine for North, South, and Central America. He is the founder and CEO of The Kaufman Group, LTD., Chairman of the Board of Imaging the World, and a member of the esteemed New York City Players Club. Kaufman and his wife make their home in Wilmington, North Carolina.

“Readers who like their fiction with a strong dose of inspiration and morality will enjoy this outing." -Kirkus Reviews”
– Kirkus Reviews 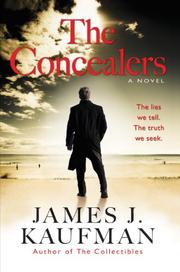 A fledgling reporter works to uncover her father’s true identity in the second novel of Kaufman’s (The Collectibles, 2010, etc.) trilogy.

Katherine Kelly, enrolled in journalism school, is not one to let an interesting story slip away. So when she decides that she wants to know who her father is, her mother realizes that she cannot keep the secret any longer. When Katherine finally meets Preston Wilson, he seems to be all she could hope for: intelligent, kind, generous with his wealth and pleased to include his newfound daughter in his life. As she gets to know him, however, she learns that Preston may not be so perfect. He doesn’t give enough attention to his wife or young son, and he seems to be shirking his responsibilities to “The Collectibles,” a group of people whom he promised to help (in the first book of this series). Meanwhile, Katherine’s first reporting job leads her to a complex fraud investigation, to which some of Preston’s employees may be linked. As she digs further, she begins to wonder whether her father is also part of the scandal—and whether she should pursue the story. Since this is the second book in a trilogy, it asks more questions than it answers, leaving most resolutions for the last volume. Also, it may be difficult for some readers to become engaged in The Collectibles characters if they haven’t read the first book. Katherine, though, makes an appealing lead—ambitious and headstrong, with a kind heart and a desire to do the right thing. In this case, the “right” thing isn’t clear, making her storyline interestingly unpredictable. The author also deftly manages the large cast of characters, so it’s easy to keep track of who’s who.

Readers who like their fiction with a strong dose of inspiration and morality will enjoy this outing.