Dr. James L. Hecht is a graduate of Cornell University and earned a PhD in chemical engineering from Yale. He then spent thirty-one years with DuPont. After he retired, he held academic appointments at the University of Delaware, Temple University and the University of Denver. His articles on public affairs have been in over twenty publications, including the New York Times, Wall Street Journal, and Washington Post. The differences he has made include decreasing racial discrimination throughout the United States and saving thousands of lives.

“A sensible and optimistic consideration of the globe’s prospects for success...an inspiring book.”
– Kirkus Reviews 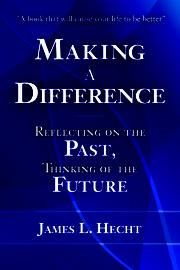 A man reflects on his life and draws on his eclectic experiences to discuss the world’s future.

Hecht (Rubles and Dollars: Strategies for Doing Business in the Soviet Union, 1991, etc.) grew up in New York City, and learned powerful lessons about the value of working hard and overcoming adversity while living through the Depression. After a stint as a copyboy at a newspaper, he went to Cornell to study chemical engineering. His education was interrupted by World War II—he spent nearly two years in the military—and he ended up attending Georgia Tech and then Yale. While at Yale, Hecht met his future wife, Amy—a day he affectionately describes as the most important of his life—and before he decamped to Buffalo to start a new job, he proposed marriage to her. A significant portion of this book is a conventional memoir, recounting a life of work, family, and public service. But seamlessly interspersed throughout these remembrances are brief reflections on a wide spectrum of global problems and issues in public policy. For example, the author recalls his experience serving as the president of Housing Opportunities Made Equal in Buffalo for five years, and what he learned about the timely issue of low-income housing and racial disparity. (He wrote another book on this subject: Because It is Right: Integration in Housing, 1970.) After discussing his military service, Hecht recommends the creation of a Universal National Service. Sometimes, his unconventional perspective is refreshingly provocative: he examines the tensions between Israel and Palestine in terms of the former’s need to territorially control an aquifer that provides a significant amount of its water supply. And, after multiple trips to the Soviet Union, Hecht encouraged a kind of commercial détente. Ultimately, the author optimistically envisions the creation of a world government, possible partially because of a resurgence of religious belief globally. This is a thoughtful meditation, and Hecht skillfully mines his own experiences for contemporary wisdom. As a whole, the volume lacks a fully coherent structure, and seems to meander sometimes from disparate topic to topic. But this remains an inspiring book—Hecht suffered two extraordinary tragedies in his life: both of his sons died. Out of deep loss, he found the will to improve the world he inhabits, and this memoir is a testament to that philanthropically charged mission.

A sensible and optimistic consideration of the globe’s prospects for success.

Because It Is Right: Integration in Housing

Justice Potter Stewart served on the U.S. Supreme Court for nearly 24 years. In 1958, President Dwight D. Eisenhower nominated Potter Stewart to the Supreme Court to replace Justice Harold Hitz Burton, who was retiring. Stewart served on the Supreme Court until he announced his retirement from the Court on June 18, 1981 at the age of 66. During his tenure (1958-1981) as an Associate Justice of the United States Supreme Court, Potter Stewart made major contributions to criminal justice reform, civil rights, access to the courts, and Fourth Amendment jurisprudence. In 1956, Stewart ruled with the majority on the 6th U.S. Circuit Court of Appeals in overturning a lower court decision and ordering integration of Negroes into elementary schools of Hillsboro, Ohio. Stewart leaned toward moderate, pragmatic positions, but was often in the position of dissenting during his time on the Warren Court. Stewart's philosophy might be most coherently traced to Justice Robert Jackson, about whom Stewart said: "He saw that 'judicial activism' could be a deadening and stultifying force... that every coercive and centralizing court decision deals a blow ... to the ability and then to the will of the democratic process to operate with responsibility and vigor."
ISBN: B0006CFASO