I joined Eastman Kodak Company in January 1970 after three years
with the General Electric Company in Syracuse, NY
Utica, NY and Pittsfield, MA where I went from being a
technical writer in Syracuse to a public relations
expert in Pittsfield.

I also had spent three years with public relations
agencies in Syracuse … through which I became an
expert on credit cards, rope, pumps, drafting
machines and several other things I knew nothing
about before being charged with writing about them.
Intermingled among this activity was 10 years of
study at Syracuse University that resulted in a B.S. in
Physics, a Masters in Communications at Newhouse,
and almost a PhD in Communications.

Concerning the PhD, I basically completed the
course work but didn’t do the dissertation because a
second child had arrived thanks to my wife given birth
to same, so rather than see my family and I starve to
death, it behooved me to get a full-time job.

The part-time jobs I had at that time where
underwhelming.

I tried selling a vacuum cleaner filled with water
that was supposed to collect the dirt. Unfortunately at
the first home I visited, I forgot to latch the lid that
held the water in and when I went to pick it up all the
water gushed out over the poor lady’s carpet. I was
able to slurp most of it up through reversed suction,
but that was the end of that job.

That was followed by numerous other efforts some
happening concurrently:

1. Covering high school sports on weekends for
the Syracuse Herald-Journal (which no longer
exists but I don’t believe it was me that
drove it out of business since their demise
occurred 50 years after I left.) I did this for a
couple of years and greatly enjoyed doing it.

Of course, being basically an intern, my most
pressing duty was getting Sports Editor Arnie
Burdick’s (his nom de plume was The Old
Scout) tea from a little café around the
corner. That café is now a Dinosaur Bar-BQue
Restaurant that would have been a
better deal. At least I could have gotten a
beer while waiting for Arnie’s tea.

2. Getting my license and selling mutual funds
with my selling to only one person … myself.

3. Operating a telephone switchboard for an
answering service from midnight to morning
in which the only call generally was from a
divorced lady in California trying to reach her
ex-husband. Of course, that’s why he had an
answering service … so she couldn’t reach
him.

5. Producing a quarterly magazine called EVENT
for University College. It dealt with social
issues and actually had a national mailing list
that included the Syracuse Chief of Police. I
happened, by some strange quirk, to get a
parking ticket and considered offering a free
subscription to EVENT if the Chief could make
it go away. Fortunately, I decided against
doing it particularly since EVENT was free to
begin with. Others on the mailing list
included the Mayor of Scranton, PA; an
official with the Unitarian Universalist
Association in Boston, MA; an administrator
at the University of Colorado; the executive
director of the Bayonne, NJ Chamber of
Commerce; among 400 or so diverse others.
(Actually, a better description than “diverse”
would be “mish-mash.”)

Going back to full-time work occurred with my
joining a Syracuse public relations firm. The job was
great from an experience standpoint … I got to do a
lot of writing … but heaven forbid, a client decided to
leave. You tended to leave as well.

About two clients leaving later I was no longer
associated with that organization. I began looking for
a more secure situation.

I had two substantial job offers … both for $13,000
a year. (That was double what I had made at
General Electric.) Gas was only about $.35 a gallon
and cows would pay you $.25 a gallon to drink their
milk. So that seemed like a lot of money to me.

One offer was from Clarion St. University in Clarion
PA as a combined professor/sports information
director. It sounded really interesting but there were
two problems. First, Clarion St. is in the middle of
nowhere. It had one cab that happened to be a
tricycle. Second, it sounded like an awful lot of work
being as how it was two jobs in one.

The other offer was from Kodak.

I decided to go with Kodak because it was a darn
good company, known for keeping it employee
promises and would, in all likelihood, be a around
forever. My job was to handle public relations in some
of their technical areas. It was a good fit using my
education and past experience.

After about three years of writing about photo
fabrication, industrial and medical x-rays and other
assorted scientific endeavors I was commissioned to
be a spokesperson for the company with local and
national media. That was a very interesting job
involving everything from calls at midnight about
horrible stinks being emitted from Kodak smoke
stacks to wondering why Kodak had refused to
sponsor the local hop-skip-and-jump tournament.

I was the Kodak spokesperson for about seven
years when suddenly management decided that the
position should not be handled by a peon and should
be done by an upper management type.

All was not lost, however. I had been helping the
sports promotion group as a volunteer and they saw a
need for my services full time. So, henceforth, for the
next 18 years (13 as an employee, five as a
consultant) it was sports or die.

Sports promotion at Kodak was in its golden era.

There were 15 of us working on sports promotions out
of about 800 in the Corporate Information
Department. Today, I don’t think there are a total of
15 people left working for Kodak … out of 60-70,000
that used to work for the company in Rochester.

At any rate, in conjunction with my new boss,
Hunter Low, I got to work on some great programs.

There were other sports efforts but these were the
main ones.

The interesting part about my role was that I was
pretty much given a free hand by Old Mother Yellow
Box i.e., conservative Eastman Kodak Company, on
what I wrote although a lot of it had to be approved.
I swear the least information upper management
received about the sports program the happier they
were.

Still, when an upper management type was needed
to massage a sport’s star or play in a golf tournament
with a prominent golf professional, the interest
increased exponentially.

To be fair, there indeed were several upper
management types that were instrumental in the
success of the sports programs, starting with
President and Chairman of the Board Gerry Zornow.

Anyhow, having such a free hand was great. I
wandered off the beaten path many a time.

Most of the people left at Kodak never got to work
with James M. Albright … much to their considerable
delight, I’m sure

“A good-humored snapshot of one aspect of the Eastman Kodak Company, sure to charm sports enthusiasts and ’80s nostalgia buffs.”
– Kirkus Reviews 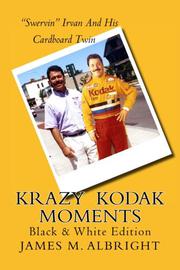 Soon after joining the Eastman Kodak Company in Rochester, New York, in the early 1970s, Albright became a writer for its Sports Promotion Program, recording the heights of the company’s athletic sponsorship in the following decade. He collects his press releases here to provide a picture of Old Mother Yellow Box’s once-massive commitment to sports promotion, highlighting its Olympic sponsorship, its various All-American teams in women’s and men’s sports, and numerous honors, including the lauded Eastman Award. The collection includes appearances from a plethora of noteworthy personalities in sports ranging from basketball to golf to NASCAR to sumo wrestling. They include Dallas Cowboys head coach Tom Landry, race car driver Mario Andretti, and basketball legends-to-be Michael Jordan and Patrick Ewing. The articles feature black-and-white illustrations and, of course, photographs, including one of track-and-field superstar Mary Decker posing with the Kodak Disc. Kodak allowed Albright great leeway, so he injected each article, memo, and travel report with a wry, self-deprecating humor. He writes in a professional but playful style in the press releases as well as in the prologues and epilogues that bookend them. These additions offer context to the story of the growth of the company along with hints at its decline. Albright’s approach in this memoir is unique, but its focus isn’t entirely clear, as there’s not enough information here to illustrate the Sports Promotion Program’s place in the history of Kodak itself. However, readers will glean much about Kodak’s promotional practices, particularly in an in-depth profile of the company’s use of “ambush marketing” during the 1984 Olympics: the company flooded the event with advertisements, including hundreds of commercials, to balance the fact that they lost sponsorship of the event to Fuji Film for the first time that year.

A good-humored snapshot of one aspect of the Eastman Kodak Company, sure to charm sports enthusiasts and ’80s nostalgia buffs.

All Creatures Great And Small

My own business,The Write Solutions. Tax preparer for H&R Block.

A compendium of "Event Magazines," a public affairs publication produced and edited for Syracuse University in the mid-1960s by James M. Albright.
Published: Jan. 15, 1967

This book primarily consists of views (photographs) depicting things that are almost gone but not quite finished yet. The areas explored in this book are "Old Roads," "Old Trees," "Old Equipment," "Old signs," {Old Barns and Sheds," "Old Things," and "Old Year".

Presents the 40-year history of Action For A Better Community, a Rochester, NY nonprofit organization created to build a more livable community following the Rochester race riots in 1964.