James Todd Cochrane was born in Fremont, California. He received his BA from Utah State University, where he majored in Business Information Systems with a minor in German.

A writer since elementary school, he published his first novel, Max and the Gatekeeper, in 2007. The sequels, The Hourglass of Souls and The Descendant and the Demon's Fork, and The Dark Society followed.

He now lives in Kihei, Hawaii, where he writes part-time while working as a computer programmer.

His first novel, Max and the Gatekeeper, is on the Accelerated Readers List and was a 2010-2011 Alaska Battle Book.

He recently published his first novella series, Centalpha 6. This is a running YA Sci/Fi series with five parts available.

“A fast-paced fantasy for preteens who are ready for something meatier than the average chapter book.”
– Kirkus Reviews 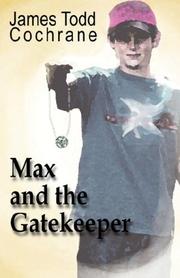 MAX AND THE GATEKEEPER

Like many kids, Max thinks his mandatory summer vacation will be boring. He’s terribly wrong.

Max Rigdon, a strong-willed 12-year-old, was sent to spend the summer with his “crazy” grandfather. Max is angry because his departure will mean losing the starting pitcher position on the baseball team. He’s sure he’s about to have a terrible summer. He’s almost right, although events at Grandpa’s house transpire quite differently than he imagined. Some dark scenes set the stage early: As Max walks from the bus stop to Grandpa’s house, the neighbors chant menacingly at him. Later that night, on his first night away from home, Max has a disturbing nightmare that is something of a premonition. “These things can’t be real. There has to be a logical explanation for all of this,” his new friend Cindy tells him. The explanation, it turns out, is that Max’s grandfather is a gatekeeper, traveling to and from other dimensions, fighting evil and trying to keep it away from this world. But some nasty elements have slipped in, and it’s up to Max, Cindy and Grandpa to right the world and prevent the destruction of life as we know it. While it’s apparent that Grandpa, Max and company are on the right side of the fight, there’s no mention of a higher power or godlike figure; the wars in the various worlds Max visits are being fought over basic concepts such as freedom. By steering clear of religious overtones and mixing a little magic with technology, Max’s story is likely to appeal to many young readers while it avoids offending some of their parents’ sensibilities. Max isn’t fully developed in this first installment in the Gatekeeper series, although he does grow from a somewhat dubious, unwilling participant to an eager protector of the human race. Rather than describing his characters’ thoughts and feelings at length and including great detail in scenes and settings, Cochrane’s writing emphasizes action, which, along with the more fantastical elements, may appeal to reluctant readers.

A fast-paced fantasy for preteens who are ready for something meatier than the average chapter book.

MAX AND THE GATEKEEPER: BOOK I: Accelerated Reader, 2010

MAX AND THE GATEKEEPER: BOOK I: Alaska Battle of the Books, 2010

Max and the Gatekeeper

A war has been waging for centuries; a magical and technological battle between good and evil. This conflict will affect life everywhere, but not everyone is aware it exists. When twelve-year old Max Rigdon is sent to stay with his grandfather for the summer, he unwillingly enters the fight. The day Max steps off the bus he is marked with an evil curse and immediately becomes the target of evil men and creatures with designs on ruling the universe. Not only does this curse cause Max physical pain but it allows his enemies to track and find him. He soon learns that the reason for this unwanted attention is because his grandfather is the keeper of a gateway; a powerful machine that makes travel to hundreds of strange unknown worlds possible. The enemy will do anything to gain possession of this power in their quest to control all worlds. With the help of his friend Cindy and others, Max must quickly learn the necessary skills to survive if he is to avoid the deadly trap that has been planned for him and his grandfather. A trap that has been decades in the making with Max as the missing piece. If successful it will change life as we know it.
Published: Sept. 7, 2007
ISBN: 978-0979720215

The Dark Society (Max and the Gatekeeper Book IV)

Two years after the mysterious disappearance of the ancient magical book, the universe has become an even more dangerous place. Hudich and his evil followers continue their quest for total domination of all worlds. At the same time, the rise of a secret society, infesting the highest levels of government, threatens to overthrow the United States. While trying to keep the formation of this new organization and how it came into power from Hudich, Max and his friends must try to break its hold on the American people without being discovered. Their efforts reveal facts that they are the target of an undercover operation that is watching their every move. With their focus on the dark society, an unhindered Hudich executes his own plans bringing him dangerously close to obtaining a permanent solution to not having a gateway. These attacks, from two different fronts, lead Max and his friends on the most dangerous chase of their lives, an adventure that will test their resolve and their commitment to each other.

Grandpa Joe's town has always been controlled by the enemy, who walks openly among them. Yet, Max has always felt safer there than anywhere else. Until now that is. A perfect killer is on the loose. One that not only destroys a person's body, but steals their soul. Kacha, the changeling, has unlocked the secrets of the ancient magical book and is building a new hourglass and gateway. He discovers how to construct a powerful weapon called "The Demon's Fork," which allows him to capture the souls of everyone in the entire town, all at once. Kacha uses this curse on Grandpa's town to distract Max and the others so he can complete his ultimate goal of capturing descendants of magical ancestry to fill his hourglass. The hunt for Kacha leads Max and his friends on a dangerous quest as they try to capture Kacha before he is able to complete his evil plans. Secrecy will be the key to avoid an even deadlier situation.

The Hourglass of Souls (Max and the Gatekeeper Book II)

For decades Hudich, the leader of an evil army, had been held prisoner in a world called Pekel. Before releasing him last summer to save Maxâ??s friend Cindy, Maxâ??s grandfather neutralized Hudichâ??s magical powers with the aid of an advanced high-tech collar. Unfortunately, Hudichâ??s escape allowed him to relay a centuries-old secret to his followers that helps them find a powerful weapon. With the aid of this new weapon, an ancient magical gateway, the enemy kidnaps Maxâ??s mother and forces him to do their bidding by threatening to kill her. To keep his mother alive, Max will embark on another perilous adventure into new worlds with hidden dangers. Convinced there is a spy among his friends, Max must decide who he can trust, if anyone, in his attempts to rescue his mother and destroy the enemyâ??s plans. His failure could free Hudich from the collar and leave innocent lives across the universe at the mercy of ruthless beings.