Jamie Zerndt is the author of The Cloud Seeders, The Korean Word For Butterfly, and The Roadrunner Café. His short story "This Jerkwater Life" was recently chosen as an Editor's Pick in Amazon's Kindle Singles store. He lives in Portland, Oregon, with his son and holds an MFA from Pacific University.

“Every character has his or her own particular preoccupations and Zerndt handles them with aplomb, using his large cast to shine varied lights on the themes of family, grieving, and hope after loss.”
– Kirkus Reviews 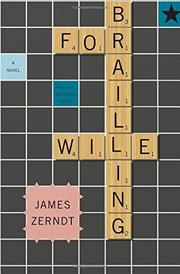 Zerndt (The Korean Word for Butterfly, 2013, etc.) explores themes of love and grief in this chronicle of a family tragedy in a small town.
It’s been almost a year since Mattias Long found his father Wile’s body hanging from a noose in his home office, but his family is still far from recovered. Mattias’ sister, Georgie, prefers a sleeping bag under her father’s desk to her own bed; his mother, Judith, is shattered by her recent discovery that her husband was having an affair. Mattias, meanwhile, exists in endless confusion that he can’t bring himself to voice. Unable to grieve together, the Long family scatters outward, seeking catharsis in different pockets of their community. Their ordeal forms the core of the novel and serves to illuminate the connections between a number of disparate characters, including Easy, a ski resort worker whom Georgie befriends; Helyana, Mattias’ religious best pal; and Sally White, the woman with whom Wile was having an affair. Every character has his or her own particular preoccupations and Zerndt handles them with aplomb, using his large cast to shine varied lights on the themes of family, grieving, and hope after loss. Indeed, the author’s skill with so many interwoven characters makes the few missteps stand out; Easy’s immediate infatuation with Georgie seems groundless, especially given their age difference, and although Helyana’s religious fervor makes sense, given her background, the frightening extent of her zealotry is out of place in the larger narrative. Still, the novel’s merits outweigh its flaws. Zerndt’s language is evocative: Mattias’ mother’s sour breath, for example, “makes him feel like he’s just stuck his tongue to an old 9-volt.” At another point, Georgie describes the ceiling as “a sky made of wood. A sky made of beautiful nothing.” Such moments exemplify what makes this novel successful, as the characters’ journeys, no matter how small, come together to form a treatise on the interconnectedness and everyday beauty of humanity.
A measured but ultimately uplifting meditation on family and hope in dark times.

Portland author leaves "golden tickets" in copies of his book...