Jan Marie Ritter is a retired educator with over 30 years of professional experience. She earned a bachelor's degree in education with a post-graduate master's equivalent. A certified Reading Recovery teacher, Jan has written articles published by the National Institutes of Health (NIH). Throughout her career, she has garnered many awards and commendations.

Married to a decorated federal criminal investigator and protection agent, Jan has intimate knowledge of the events in which her husband, Bob, was an eyewitness to history. ... Starting as a personal journal for Jan and Bob's children, the work evolved into much more--fueled by the positivity received from family and friends. With a sharp focus on detail and veracity, Jan spent years on research, writing, and rewriting. Jan and Bob have authored an accomplished true-crime memoir that has been acclaimed as one of the most accurate portraits ever written of the United States Secret Service (USSS). ...

Did You Choose Your Parents? is the unique story of Bob's quest to keep a pre-birth vow given to a universal collective consciousness. In exchange for promising to further world peace, Bob was granted advanced cognitive abilities and was offered a set of parents who descended from courageous and idealistic ancestors. The assassinations of President John Kennedy along with Robert Kennedy and Martin Luther King, Jr., weighed heavily on Bob.
Due to the tragedy caused by these murders and the unfulfilled "what ifs" had these champions of peace and racial harmony not been cut down in their prime, Bob dedicated his life to preventing the assassination of the U.S. President who would be elected in 1980. This President was supposedly the next cursed to die in office. Since 1840, every President elected or re-elected in a year ending in zero had died in office. Of those seven Presidents, four died by assassination!

Becoming a U.S. Secret Service agent, Bob developed new procedures and fought to prevent the opening to the public of the Presidential arrival area of the Washington Hilton Hotel. Several years after his warning went unheeded, a would-be assassin fired a gun from this very same location on March 30, 1981. President Reagan and three others were wounded. The President came very close to dying. Fortunately, Reagan survived due to the efforts of the Secret Service along with the trauma team at George Washington University Hospital. President Reagan, as leader of the free world, went on to bring down the Berlin Wall, end the Cold War, and pursue peace through strategic arms limitation.

Did You Choose Your Parents? presents compelling evidence of an existence before birth. Bob's many years of extreme dedication to his pre-birth vow and his advanced powers of foresight reflected in DYCYP? offer unparalleled proof that the soul, spirit or whatever you wish to call it, exists both before the birth and after the death of the human body. This should be comforting news in an era of increasing violence and pandemics, etc. Hopefully, it will inspire others to offer any pre-birth recollections they may have.

This exciting, informative, and entertaining work also includes a look at the JFK assassination and Lee Harvey Oswald. Agent Ritter suggests that Oswald might have assassinated Kennedy in order to be welcomed in Cuba with open arms. Ritter suggests that after the assassination, Oswald could have been making his way to one of Dallas' airports where he planned to hi-jack a plane to Cuba. Ritter also gives other possibilities and even mentions a little-known OSS-CIA point-shooting technique used by Jack Ruby in Oswald's murder...

“The book retraces Bob’s steps toward realizing his “personal life mission” to prevent another assassination. The author describes her husband’s preoccupation with the legend of Tecumseh’s Curse. The curse is thought to have cost seven U.S. presidents their lives, and Bob sought to help Reagan avoid this fate, though he wasn’t assigned to the president’s detail. This obsession with intercepting the curse became “a central theme and motivator of his career decisions.” The book backtracks in history to Bob’s defining ordeals, both international and domestic, when, after years with the U.S. Park Police and a brush with assassin Samuel Byck, he realized a life goal of joining the Secret Service in 1975. Jan Marie writes of her surprise when her husband confessed to a firm belief in having past lives, a knack for foresight, and the intricate nonverbal communication gifts he shared, since infancy, with a spectral “collective consciousness” community.”
– Kirkus Reviews 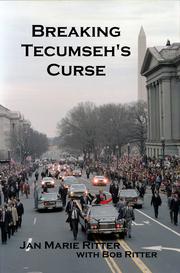 A debut book provides an insider’s account of the Secret Service with the bonus of a spouse’s perspective.

Jan Marie Ritter opens this work on the fateful day of March 30, 1981, when President Ronald Reagan and three others were shot outside the Washington Hilton Hotel. This is also the moment when her two children, who are otherwise largely absent from the text, understand what their father does for a living as a member of the Secret Service. Ritter then turns back the clock to the early years of her relationship with co-author Bob, after they met in Spanish class at the University of Maryland in 1967. Of particular note is a rough period for the couple beginning in 1976, which included Bicentennial celebrations, the presidential election and inauguration, and the shah of Iran’s state visit. As Ritter notes, “The past two and a half years had been an endless action-film serial of late night call outs, long hours, no days off, and out-of-town travel.” At the end of the memoir, she circles back to the Reagan assassination attempt. Fortunately, Bob was stationed elsewhere that day, but he had been critical of a change made three years prior to the hotel’s security protocol that he felt was too risky. Though still troubled by the turn of events, he is vindicated here, along with other ideas of his that were unwisely ignored. Overall, Ritter does a respectable job of weaving the couple’s memoir into the larger narrative of a turbulent period in American history. In addition, the intricate tapestry covers a remarkable range of subjects. But her technique of presenting major national and international events through conversation rather than narration occasionally produces stilted dialogue: Bob goes on and on in long discursive paragraphs while Ritter offers clunky interjections here and there. For example, while they discuss the Jonestown Massacre, readers see this contrived exhortation: “ ‘What can we learn from this tragedy?’ I asked.” In light of relationship pressures and professional frustrations, Bob eventually decided to save his marriage and left the Secret Service. Ultimately, the authors were able to move past this period of strife and look forward to further adventures, perhaps saved for another time.

An impressive memoir with something for everyone: history and government, love and marriage, life and death. 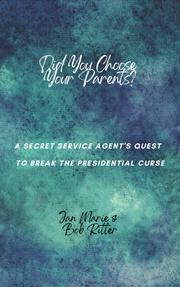 DID YOU CHOOSE YOUR PARENTS?

A retired government agent recalls his adventurous career in security.

Jan Marie and Bob Ritter, the married co-authors of this lively, eye-opening memoir, recount Bob’s tumultuous life as a former member of the U.S. Secret Service based in Washington, D.C. Narrated by Jan Marie, a former elementary school teacher, the book (which has a confusing, irrelevant title) begins in early 1981 on the day of the attempted assassination of President Reagan. Her testimony depicts Bob as a seasoned, intuitive government operative fully aware of (and attentive to) the vulnerable hot spots near the Washington Field Office territory. The book retraces Bob’s steps toward realizing his “personal life mission” to prevent another assassination. The author describes her husband’s preoccupation with the legend of Tecumseh’s Curse. The curse is thought to have cost seven U.S. presidents their lives, and Bob sought to help Reagan avoid this fate, though he wasn’t assigned to the president’s detail. This obsession with intercepting the curse became “a central theme and motivator of his career decisions.” The book backtracks in history to Bob’s defining ordeals, both international and domestic, when, after years with the U.S. Park Police and a brush with assassin Samuel Byck, he realized a life goal of joining the Secret Service in 1975. Jan Marie writes of her surprise when her husband confessed to a firm belief in having past lives, a knack for foresight, and the intricate nonverbal communication gifts he shared, since infancy, with a spectral “collective consciousness” community. The book’s narration from Jan Marie’s point of view sometimes leaves the reader with unanswered questions about Bob’s perspective. However, through a riveting series of stories and revelations, the Ritters collaboratively present a portrait of determination, personal sacrifice, and “patriotic ideals and civic service.” While the book requires an appreciation for unexplained phenomena and mystical beliefs, it never reads as contrived and touches on several seminal moments in American political history.

An eye-opening glimpse inside the experiences and beliefs of a secret service agent.

Did You Choose Your Parents?

BREAKING TECUMSEH'S CURSE: THE REAL-LIFE ADVENTURES OF THE U.S. SECRET SERVICE AGENT WHO TRIED TO CHANGE TOMORROW: 4 Out of 4 Stars! OnlineBookClub Official Review, 2013

Did You Choose Your Parents?