Jane Sweetland, a former dean and associate vice-president at California State University Channel Islands, has collected over the years a veritable bouquet of degrees: a BA in American Studies, teaching credentials in literature and history, master’s degrees in counseling and creative nonfiction, and a doctorate in education. Prior to becoming a university administrator, she was a middle and high school teacher, where she worked mightily to impart to her students a curiosity about the world she hopes they’ll explore, and a knowledge of the history that got us where we are today.

An avid reader, relentless researcher and unrepentant eavesdropper, Jane marvels at the stories that make up our lives. She has a deep love of the outdoors and has hiked many hundreds of miles of mountain trails though she abandoned solid earth for a while to sail with her family in a small boat from the Pacific Northwest to the South Pacific and from California through the Panama Canal to South and Central America. Having found her grandfather’s violin, she is now a novice violinist. In this musical endeavor, her family is grateful that she practices only in the confines of a small closet with all doors firmly shut. 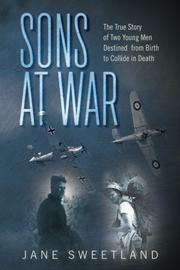 Sweetland (co-author: The Other College Guide, 2015) builds upon a cherished fragment of family history to create a comprehensive story of two opposing World War II pilots.

This well-researched volume tells of the author’s American uncle, Ted Sweetland, and the German who killed him, Joachim Müncheberg. On March 23, 1943, Müncheberg shot down Sweetland’s Spitfire over North Africa, but the American pilot steered his dying craft into the German ace’s Messerschmitt, killing him, as well. It was the 135th plane that Müncheberg had taken down and Sweetland’s first, as the German was a veteran pilot and the American a relative novice. Still, the author notes that the two were otherwise quite similar; both came from well-off families, and both were initially apolitical. The two even looked similar in appearance, she says: “[Joachim] was born just six months before Ted and when I saw his picture I thought they looked a little like cousins with their smooth white faces, light hair and deep blue eyes.” She details the histories of the two pilots as they make their ways to their joint, final fate. While Joachim, who came from a military family, was rising through the ranks as a pilot, Ted was trying to find himself as a California college student and fledgling writer and photographer. Joachim was shipped around the globe, wherever the Fatherland needed him; several months before the Japanese bombed Pearl Harbor in December 1941, Ted enlisted in the U.S. Army Air Corps against his parents’ wishes. Author Sweetland’s history is certainly quite a feat of research. She set out to learn more about the uncle she never met, starting with Ted’s war diary, then, through determined digging, located a nephew of Joachim’s, and this provided the foundation of this revealing work. Photos culled from family albums also help to bring the two men to life. In addition to family stories, however, Sweetland provides much-needed historical perspective by effectively explaining how World War II evolved and what exactly the two pilots’ places were within it. Overall, she’s done military-history readers a service by offering a war story on a very personal level.