Janet Kole was a lawyer for over thirty years, before retiring to write full time about lawyers getting murdered. Her new series, The Odd Fellows, introduces a retired lawyer and a hit man who team up to save the lawyer's daughter from a common client.

Janet was a reporter for the Record (aka The Bergen Record) before law school, and had a monthly column on women and the law in Harper's Bazaar. 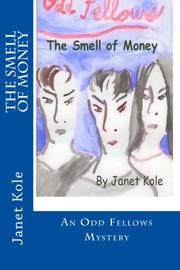 The Smell of Money

A senior partner at a Philadelphia law firm, whose colleagues may be trying to push him out, collides with a professional assassin in this thriller.

When two of Jack Morgenthau’s clients, Stanley Barnard and his mother, clash over the family hardware company, Jack bows out. It’s a conflict of interest, after all, though he still infuriates both Barnards. Partners in the Firm Underwriting Committee, in a power grab, use Jack’s newly irate clients as grounds to force him out of the firm. Trouble, meanwhile, is also brewing just across the street from the Barnards’ factory. Old Rick Kozak, founder of We Love Trash, fields an offer to buy his transfer station. The buyer’s representative, Larry Evans, is actually a hit man who’s ridden into town to take out the company owner. But Larry’s client apparently wants more than just Old Rick murdered, so the killer will have to stay in Philadelphia for a spell. Jack, debating whether or not to fight the FUC, has no idea what he would do if he opted to retire. Larry’s considering retirement, too, but his hit list unfortunately has a new name: Jack’s daughter Monica, an Environmental Protection Agency lawyer. The two men’s lives inevitably intersect, with a surprising outcome. Kole (Suggestion of Death, 2011, etc.) seasons her novel with a bit of farce; sure, characters pronounce FUC as “eff-you-see,” but it’s hard not to glimpse the sporadically uttered curse. Jack is a refreshingly direct protagonist. When head of operations David Smith, for example, tries to pack up Jack’s office, Jack bluntly tells him, “I’m one of your bosses. Get out of my office.” At the same time, the calculating Larry is chilling. He may be losing his taste for his profession, but he kills more than one person in the story, and he’s clearly exceptional at it. Regardless, the author retains her tongue-in-cheek narrative all the way until the final act, a coda that’s both unnerving and gleefully comical—with the potential for a follow-up book featuring at least one of the characters.

A witty tale with two retirees—a lawyer and a hit man—cleverly paralleled. 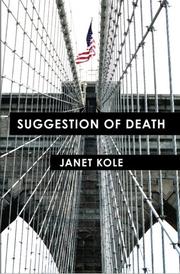 When retired lawyer David St. Clair is brutally murdered, our narrator and hero, a lawyer from David’s firm whose name and gender are never revealed, sidesteps the police and investigates his or her own leads. The law firm offers plenty of suspects, most notably Michael Bolden, the firm’s managing partner. Michael is notoriously conniving, behaves erratically and suspiciously goes missing in the wake of David’s murder. But when one of Michael’s severed fingers arrives at the office demanding no one pursue him, our narrator only becomes more engrossed in the mystery. From here, the story is a cookie-cutter procedural, with our narrator working through a string of devious suspects, including maligned co-workers and old friends. Our narrator pursues these leads with the gusto of a latter-day Nancy Drew (or maybe Encyclopedia Brown) and reveals a host of surprising turns as the story progresses. It seems each character Kole introduces has a secret past and is determined to keep our narrator from discovering the person responsible for tormenting the law firm. To that end, subtlety is not one of Kole’s priorities, and she even goes as far as to end many chapters with a line assuring readers the plot is continuously thickening. Kole does a good job of living up to the promise and manages to tie even the most tangential red herrings into her story. In the end, however, the biggest mystery remains the one surrounding our narrator. Kole goes to a lot of trouble keeping this character a mystery to her readers, and it’s not clear why she takes this approach. The book’s narrator is our gateway into the story, and it’s unfortunate that we never get to learn more about him or her. This page-turner is better than your average episode of Law & Order and will satisfy those in the mood for a straightforward mystery.