Janet Squires began her career writing for national magazines and now works full time creating books for children and adults -- A special edition of The Gingerbread Cowboy was commissioned by the Arizona governor's office and given to every first grade student in the state. Her debut adult novel, Desperate Straits, was a finalist for Best Novel for the 2015 Peacemaker Award. Her presentations and workshops are requested for schools, libraries, and conferences. Her favorite activities are the ones that involve horses or dogs -- she always has at least one rescued pup in her life. She lives with her husband where hawks still sail overhead by day and coyotes serenade at night. 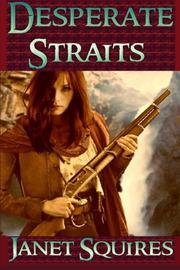 An Irishwoman encounters intrigue and the search for a lost treasure when she moves to the Arizona Territory in this debut novel.

Sarah Ryan is heartbroken after the death of her father. Instead of remaining in Ireland, she intends to move to America, where her sister and brother-in-law, Mary and Ben McAllister, live in the Arizona Territory with their son, Will. Upon arriving in Arizona, she finds her world shattered by another tragic loss—Mary and Ben. They were murdered on their ranch, Hermit’s Rest, leaving their son an orphan. Grief-stricken, she resolves to stay and help Will and the ranch hand, Jeremy, run Hermit’s Rest. When Texas Ranger L.T. McAllister, Ben’s brother, comes to town with a suspect in the murders, the townspeople anticipate a quick resolution to the case; but the arrest draws the ire of the sheriff, Grant Simpson. He is less concerned about maintaining law and order than he is about finding a treasure known as the Lost Adams Diggings. L.T.’s arrival threatens his ironclad grip on the town and his plans to locate the treasure. As Sarah and L.T. settle in to life at Hermit’s Rest, they discover a powerful, mutual attraction, but secrets from his past, and a dangerous enemy, put their lives in danger. Squires’ briskly paced romance crackles with energy thanks to well-drawn characters and settings. Sarah, a sympathetic heroine, discovers a fierce inner strength through helping Will and Jeremy run Hermit’s Rest. She has a strong romantic foil in L.T. Although he declines to discuss some aspects of his past, his rugged appearance and tough demeanor belie a kind heart and honorable sense of justice. They are surrounded by a colorful cast of supporting characters, including Jeremy, a longtime ranch hand at Hermit’s Rest who may hold the key to finding the lost treasure. Squires’ use of historical details bolsters her settings, particularly the depiction of everyday life in the Arizona Territory and the references to the Lost Adams Diggings.

A well-developed romance wrapped in an engaging and fast-paced Western, complete with strong protagonists, colorful settings, and superb historical details. 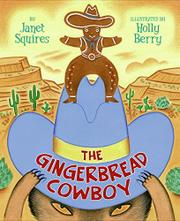 This Wild West version of the traditional tale is sure to delight youngsters, as well as introduce them to the flora, fauna and geography of the west. Tired of biscuits for breakfast every morning, the rancher’s wife cuts out some gingerbread dough in the shape of a cowboy—boots on his feet, hat on his head, vest with fringe, big belt buckle. But when the rancher peeks in the oven, the Gingerbread Cowboy runs away. “Giddyup, giddyup as fast as you can. You can’t catch me, I’m the Gingerbread Man.” In his travels, he meets a horned lizard, a roadrunner, a band of javelinas, a herd of long-horned cattle, some cowboys and finally, the coyote, who offers to ferry him across the river. Berry’s warm palette perfectly suits the desert scenery. Her illustrations give readers a close-up view of many lesser-known animals and plants. A welcome change of setting for the Gingerbread Man, sure to find a spot on the library shelf. (Picture book. 3-8)