Petrie has been enchanted by the sea for as long as she can remember. She became a certified SCUBA diver while in high school, and spent many years exploring coastal waters. Her fascination with marine invertebrates grew while working for the New England Aquarium as an Outreach Specialist. Since then, she’s spent years caring for these fascinating sea animals, and teaching children and adults about the habitats and sea life commonly found near the shore. The material covered in her children's stories are topics commonly taught by Petrie in her popular sea animal programs. Petrie has experience in all facets of the sea, having worked as an assistant plant manager of a large, Gloucester/Boston seafood company.

In her free time, Petrie made many trips to the Ossipee, New Hampshire area to visit with the Ossipee Historical Society, the Carroll County Courthouse, and the Concord State Library, trying to piece together the events of 1916 that kept everyone mesmerized while the tragic story was unfolding, yet was seldom mentioned years later. She gained interest in this story after learning the cottage she spent a single night vacationing in as a baby, seemed to be occupied by an unsettling presence.

As a certified teacher, grades K-8, and a Reading Specialist, all ages, Petrie has earned her Bachelor of Science and Master of Education degrees in the field of education, with a concentration in reading. Petrie also holds a Bachelor of Arts degree in Art, with a graphic design concentration. Because of her background in developing integrated curriculum units for elementary and middle schools, Petrie has available on her website, free, downloadable curriculum packets for each of her children's books. 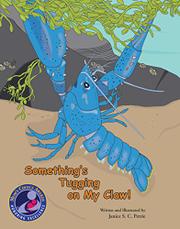 Something's Tugging on My Claw!

A rare blue lobster searches for the creature who took his claw in this brightly hued, educational children’s book.

Some days in the ocean are more treacherous than others, but when you’re a highly visible blue lobster, you do your best to watch out. When a young blue lobster feels something tugging hard on his claw, he does what lobsters do—he lets it go. Called “dropping” a claw, this act allows the hero to escape from his perceived threat. After discarding his claw, he sets out on a journey to find out who was pulling it. He sees a Jonah crab, a lobster trap, a swordfish, an octopus, and a horseshoe crab, among others, during his quest, avoiding them just in case they want a nice lobster dinner. In the midst of trying to uncover the culprit, the lobster molts his old, hard shell. He then realizes that he’s got his second claw back—albeit a tad undersized. With the threat gone (the lobster discovers that it was a human, enchanted by his cobalt hue, who yanked at his claw), the blue lobster is free to resume his under-the-sea life—but this time, he’ll wait until that second claw grows in. Little fish narrators dot the pages of the work, giving inside information about the narrative, such as explaining what a kitchen in a lobster trap is or that fish hide in the sand to avoid predators. The book culminates in a page of lobster facts aimed at budding biologists, complete with an illustrated diagram of all the important crustacean parts. Petrie (The Bumpy, Lumpy Horseshoe Crab, 2011, etc.), a former outreach specialist for the New England Aquarium, definitely knows her sea life. Both educational and sensational, this book should delight readers young and old, especially serving those who have an interest in marine biology. The little fish swimmers are a wonderful addendum to this children’s tale, answering many of the questions that could arise from young readers and pushing them to conduct their own research into the lobster’s ocean life. Petrie’s colorful illustrations are scientific enough to be accurate but not so complex that they become dull. Though the work is intended for younger readers, the prose is lively—many an adult wouldn’t mind reading this at bedtime to marine-leaning children again and again.

A captivating work that offers vivid lessons about lobsters (and crabs). 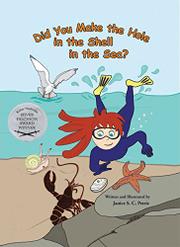 Did You Make the Hole in the Shell in the Sea?

An informational picture book that solves a whodunit of the sea in lilting, rhyming text.

Petrie (The Bumpy, Lumpy Horseshoe Crab, 2011) wrote and illustrated this picture book about the feeding habits of sea creatures. A young girl clad in a wet suit, flippers, and a scuba mask finds an intact clamshell, missing its clam, with an unexplained hole drilled in it. She asks a nearby adult what might have created the hole, and when he panics, convinced it must be the work of a dangerous creature (“A shark, it’s a shark, / whose tooth bit right through it. / I knew when I saw it, / a shark’s tooth could do it!”), all of the children are ordered out of the ocean. It’s up to the youthful zoological detective to discover the perpetrator so that the revelers can return to the water. Based on her own knowledge of sharks, the girl rejects the adult’s hypothesis, and she questions a sea star, a sea gull, a lobster, and a moon snail.  She is accompanied in her inquiries by three comic fish that make elaborative asides. The interrogated animals are clam predators, but they declare their innocence: “Not me, not me, / I guarantee. / I love to eat clams, / but it wasn’t me!” Each explains his or her modus operandi, which doesn’t match the evidence; the sea gull, for example, says, “I drop the clam hard / to shatter its shell. / Then I swoop down to eat / from the rock where it fell.” Cartoonish illustrations fit the whimsical tone and mood, and bright colors help solidify the seaside setting. Shifts in perspective demonstrate the scale of the animals in relation to each other and the girl and remain mostly consistent. An afterword includes additional information about each of the ocean animals featured.

An entertaining examination of oceanographic food webs, good for both everyday read-alouds and classroom instructional use. 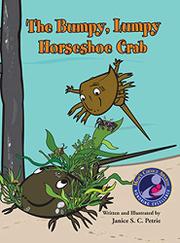 In Petrie’s (Did You Make the Hole in the Shell in the Sea?, 2013, etc.) educational children’s book, a  horseshoe crab learns that an apparent fashion statement is actually necessary for survival.

As a young horseshoe crab wanders the seafloor, “flapping his gills” and “gliding with ease,” he notices something peculiar—a fellow horseshoe crab who’s a bit older, with bits of seaweed, barnacles, and other sea fauna encrusting her shell. The youngster is shocked that his female counterpart would choose to mar her shell this way—why not be light and free? Upon closer inspection, he sees that she has periwinkles, limpets, barnacles, and seaweed covering her sleek outer shell. Although the younger horseshoe crab is bewildered at the idea of weighing oneself down on purpose, he quickly learns why it’s smart. As the sea retreats and the tide gets low, the female horseshoe crab buries herself in the sand, disguising her shell and avoiding the watchful eye of predatory birds. From the air, she just looks like a bunch of seaweed in the ocean. Without anything to hide behind, the younger horseshoe crab is quickly snatched into the sky by a sea gull, but the crustacean manages to fall from its grasp by twisting and turning. After this near-death experience, he understands the wisdom of collecting creatures to live on his carapace, and he’s soon lumpy, bumpy, and, most importantly, safe. Petrie once served as an outreach educator for the New England Aquarium, and her knowledge of and passion for marine life is apparent throughout this colorful work. Readers don’t need to have a deep interest in marine biology to love this book; it’s so engrossing and engaging that the fact that it’s also educational is just an added bonus. Children won’t just learn about horseshoe crabs: after the story is over, the last pages offer a glossary of the sea creatures mentioned within, including limpets, Jonah crabs, and barnacles. Petrie’s bright illustrations are also a delight. Overall, this work is sure to inspire further under-the-sea exploration at bedtime and beyond.

A fun marine adventure that’s fit for everyone. 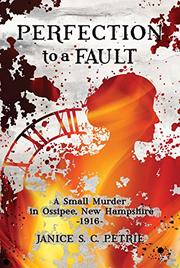 Perfection To A Fault

Petrie (Did You Make the Hole in the Shell in the Sea?, 2013, etc.) vividly re-creates the circumstances and aftermath of an early 20th-century murder in this true-crime book.

A cottage on the shore of New Hampshire’s Lake Ossipee seems an unlikely location for a grisly murder, but Petrie notes that there might have been “an unrest on that piece of property that wouldn’t disappear with the passage of time.” She cleverly opens not with the crime itself but with new owners arriving in 1955. Sensing an unearthly chill as they entered the cottage, they never returned to the place alone after their first visit and quickly sold it. Everyone in the gossipy community knew that Florence Small had died in a suspicious house fire on September 28, 1916; her husband, Frederick, was convicted of her murder and hanged. As Petrie chronicles that momentous day as well as Small’s trial and sentencing, she enlivens her story with excellent dialogue and scene-setting. She discusses the case in great detail, often drawing on newspaper stories, but the facts never become too overwhelming for readers. On the day in question, Petrie writes, Small and a friend traveled to Boston to broker insurance sales; that evening, he received a message that his home had burned down with Florence inside. Small acted suitably distraught, but the next day, the circumstances looked too perfect. His satchel contained important documents one wouldn’t want to lose in a fire; he’d taken out a large joint life insurance policy; and he had a history of domestic violence. By gradually revealing these salient pieces of background information, Petrie’s pacey prose puts readers in the same position as the investigators. It’s intriguing to learn how advanced forensic science was at the time: from Florence’s stomach contents, for example, experts could pinpoint the hour of her death, and investigators eventually determined that Small could have used a timed incendiary device to start the fire in his absence.

Exhaustive detail and flawless re-creations make for real suspense in this nonfiction tale.

"Perfection To A Fault" Book Featurette

Did You Make the Hole in the Shell in the Sea?: Silver Falchion Award, 2014

Perfection To A Fault: A SMALL MURDER IN OSSIPEE, NEW HAMPSHIRE, 1916: "Best of New Hampshire" by New Hampshire Magazine, 2001

When lobster fishermen Jimmy and Murph Sweeney happen upon an abandoned fishing boat that was illegally dragging within state limits, it ignites the tension that has been smoldering between lobstermen and fishermen for years. As the Bay State Skye’s cargo is off-loaded, it sets a series of adverse events in motion for all who share the misfortune of coming into possession of its catch. Based on actual events, this historical fiction gives an authentic glimpse into the inner circle of the Gloucester seafood industry in 1990 that hinges on interviews with fishermen, seafood processors, and restauranteurs. From the treachery of the sea, to the deception at the docks, to the struggle to convince the state to help tackle the mounting mound of fish offal piling up at the defunct waste-reduction plant, this tale reveals the challenges faced by those who make their living by going down to the sea. Petrie’s family has been involved in the seafood business for two generations. Her interest in the industry was piqued after spending several years working in the trade herself, which led to her inclination to tell this story.
Published: June 22, 2018
ISBN: 9780970551047