Jason Hill is a force of nature, a promising debut author whose potential with the written word is unlimited. He is one of the most talented new indie authors today, and his recently-released self-published novel is getting rave reviews from both lay readers and professionals alike. At the time of this writing, in addition to already having received a good review from Kirkus, his debut feature is being reviewed also by his hometown paper, the San Antonio Express-News. It should come back any day now.

An all-around creative individual, he is also a graphic artist, and designed his own front and back cover for his novel. He has run the gamut of personal experiences in his search for his own personal sense of purpose; he has endured homelessness, incarceration, poverty, betrayal, just about everything you can imagine in the days leading up to and during the writing of his book. Indeed, he wrote his 80,000 word debut in 54 days. His novel was also professionally-edited before publication, and on sale on the shelves in San Antonio's premier indie book store, The Twig Book Shop. His first book signing/reading event will take place on Tuesday, January 17. 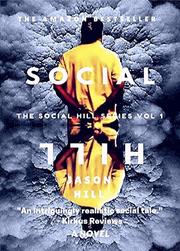 A debut autobiographical novel follows a black father dealing with—or avoiding—his problems, and all the effects this has on his family and friends.

Tony Hill introduces himself by noting that he is “afflicted with an invisible sickness.” What that malady is and how he is not “an easy man” are the main focuses of the book, which catalogs a rough time in his life. When readers meet Tony, a Chicago kid and Navy veteran, he’s living in his mom’s house in San Antonio, Texas, with his white wife, Darlene, and two kids, one of whom has Asperger syndrome. In retrospect, this is almost a good time in Tony’s life, when his biggest worries include having to talk about sex with his daughter. (When she asks how far she can go and still be “okay,” he starts talking about centrifugal and centripetal forces; he’s not going to win any father of the year awards, but he’s trying.) But soon, Tony’s life spirals out of control, with him taking his two kids and living out of his car or in seedy hotels, and soon running out of money. If this were a Hollywood movie, Tony would (as he notes, sardonically) get his groove back, but the author doesn’t paint so optimistic a picture. Instead, readers see Tony trying to find love (or simply reminiscing about his greatest romance, his “Mount Rushmore” of relationships), getting into trouble with the law, and realizing (on one long road trip) that he’ll probably have to beg for gas money. This is a dark picture of a troubled man in hard times, somewhat lightened by Tony’s sense of humor and chattiness. Actually, with its asides like “I’ll probably tell you about later” and “I forgot to tell you about that,” this novel reads like the ruminations of a somewhat rambling guy sitting at a bar. It employs an engaging, casual tone and allows Tony to discuss a lot of serious topics—race, gender, love, faith, politics—with different characters. But it may not propel readers through the story.

An intriguingly realistic social tale about a despairing parent.